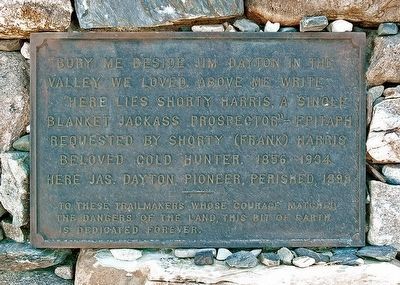 Photographed By Alvis Hendley, February 20, 2007
1. Shorty Harris Grave Marker
Inscription.
Shorty Harris Grave. . Bury me beside Jim Dayton in the valley we loved. Above me write: "Here lies Shorty Harris, a single blanket jackass prospector." - Epitaph requested by Shorty (Frank) Harris, beloved gold hunter, 1856-1934. Here Jas. Dayton, pioneer, perished, 1898. To these trailmakers whose courage matched the dangers of the land, this bit of earth is dedicated forever. . This historical marker was erected in 1936. It is in Death Valley National Park in Inyo County California

Bury me beside Jim Dayton in the valley we loved. Above me write: "Here lies Shorty Harris, a single blanket jackass prospector." - Epitaph requested by Shorty (Frank) Harris, beloved gold hunter, 1856-1934. Here Jas. Dayton, pioneer, perished, 1898. To these trailmakers whose courage matched the dangers of the land, this bit of earth is dedicated forever.

Topics. This historical marker is listed in these topic lists: Industry & Commerce • Settlements & Settlers. A significant historical year for this entry is 1934.

Location. 36° 12.453′ N, 116° 52.2′ W. Marker is in Death Valley National Park, California, in Inyo County. Marker can be reached from West Side Road, 12.3 miles south of Badwater Road, on the left when traveling south. West Side Road is unpaved but it is graded and maintained to accommodate passenger vehicles. Touch for map. Marker is in this post office area: Death Valley CA 92328, United States of America. Touch for directions.

Other nearby markers. At least 5 other markers are within 15 miles of this marker, measured as the crow flies. Eagle Borax Works (approx. half a mile away); Bennett-Arcan Long Camp (approx. 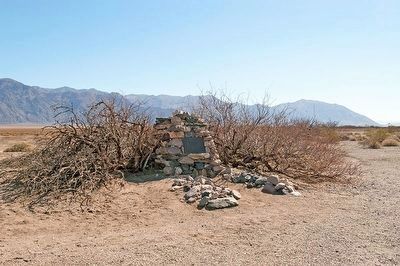 Regarding Shorty Harris Grave. Frank "Shorty" Harris (1857-1934) was born in Rhode Island and headed west when he was twenty. Before arriving in Death Valley, Harris prospected in Leadville (Colorado), Tombstone (Arizona), Coeur d'Alene (Idaho). In Nevada and Death Valley he prospected in Ballarat, Tonopah, Goldfield, Bullfrog and Rhyolite.
Harris was five feet, four inches tall. People said that he could smell gold. After making a claim, Harris didn't work the claim. He preferred talking and drinking in saloons to mucking in goldfields.
Harris died in his cabin at Big Pine in 1934 at the age of seventy-seven.

On 16 November 1934, the Inyo Independent reported the funeral of Shorty Harris in Death Valley:
"While the sun sank slowly into the purple haze that filters over Death Valley at twilight and taps sounded in the clear air of this mysterious land he knew so well, "Shorty" Harris, miner, Good Samaritan and friend to all who knew him, was laid to rest in a dusty grave on the valley floor last Sunday afternoon.
"He was laid beside the grave of his old pal and friend, Jim Dayton, long 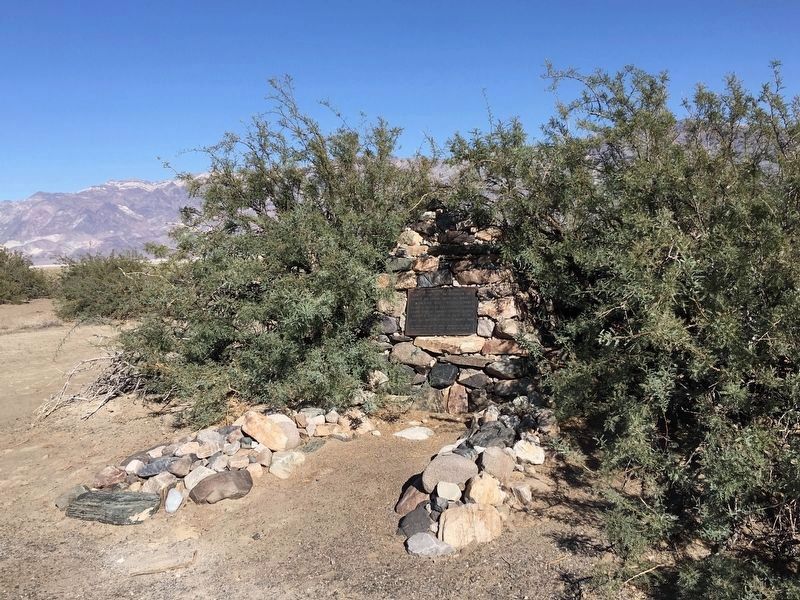 Photographed By Craig Baker, October 28, 2020
3. Shorty Harris Grave Marker
a respected pioneer prospector of Death Valley region.
"Shorty Harris, dean of all desert prospectors, died at the age of 74 years in a cabin at Big Pine, where he had sought rest and health following an illness about a year ago. He passed away in the restful sleep that he had sought.
"In deference to his request, he was buried at the "bottom of Death Valley", beside his partner. He had prospected with Jim Dayton many years ago in search for the yellow metal.
"The simple service, when the last rights were pronounced, was beautiful in the quiet solitude of the great valley. Chaplain Henry of the C.C.C. camp at Cow Creek, officiated at the open-air burial service. One hundred and fifty C.C.C. boys were present, bowing their heads out of respect to the grand old man of the desert, whose stories of early Death Valley, of burro-prospecting days, have been chronicled far and wide by writers of national repute.
"The body was lowered in the grave exactly at sunset and more than 300 people stood quietly at attention as taps sounded.
"Many old timers of the valley were present at the services, including Mr. Zabriskie of Pacific Coast Borax Co. and Bob Montgomery, who originally located Rhyolite and the Shoshone mine, and had not been in the valley for some 30 years.
"The burial of "Shorty" Harris went down in history as the first Christian burial in Death Valley, 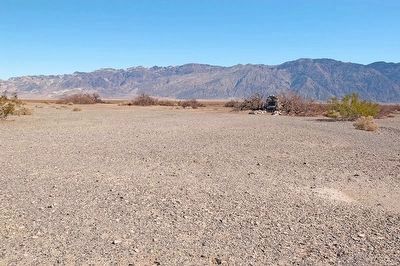 Photographed By Alvis Hendley, February 20, 2007
4. Shorty Harris Grave
altho there had been many more who were buried there in shallow graves before, without Christian service."

Why the penguin?
According to the museum, the penguin is a self-portrait of the artist. The penguin symbolized Bervoets' feeling of displacement in the Nevada desert.

Another source, Rhyolite caretaker Clint Boehringer has a different version:
"Did you see the statue of the miner with the penguin behind him? That's a tribute to Shorty. When he'd be out on the desert and would take up drinking from his bottle of O, be Joyful, after a time he'd look behind him and see a penguin following him around. He didn't see pink elephants, he saw penguins." (Source of Clint Boehringer quote: DesertUSA) 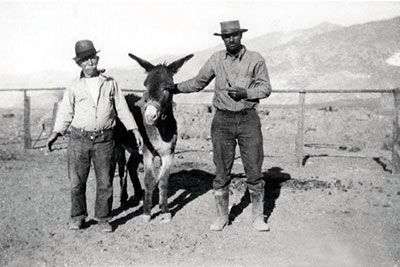 Courtesy of East California Museum
5. Shorty Harris and Seldom Seen Slim
Seldom Seen Slim is buried in the Mojave Desert near Death Valley in the mining boom town of Ballarat where he lived for many years. Ballarat, almost a ghost town today, has several historical markers.
— Submitted April 6, 2016, by Alvis Hendley of San Francisco, California. 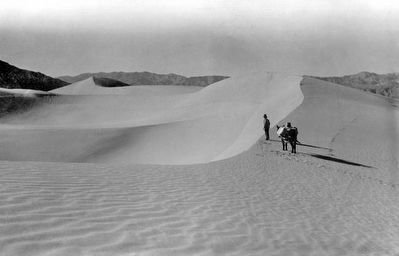 Courtesy of East California Museum, circa 1918
6. Shorty Harris and His Pack Burro in Death Valley 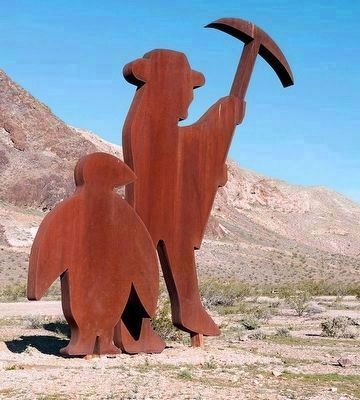