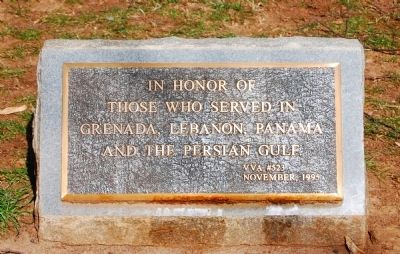 By Brian Scott, February 8, 2009
1. In Honor Of Marker
Inscription.
In Honor Of. .
In honor of those who served in Grenada, Lebanon, Panama and the Persian Gulf.. . This memorial was erected in 1995 by Vietnam Veterans of America, #523. It is in Greenville in Greenville County South Carolina

In honor of
those who served in
Grenada, Lebanon, Panama
and the Persian Gulf.

Other nearby markers. At least 10 other markers are within walking distance of this marker. Greenville County Vietnam Veterans Memorial (within shouting distance of this marker); Cleveland Park (about 300 feet away, measured in a direct line); Capers Bouton Memoral Fountain (about 300 feet away); African Elephant (about 700 feet away); Crenshaw's Battery (approx. 0.4 miles away); Brockman Park (approx. 0.4 miles away); Major Rudolf Anderson Jr. 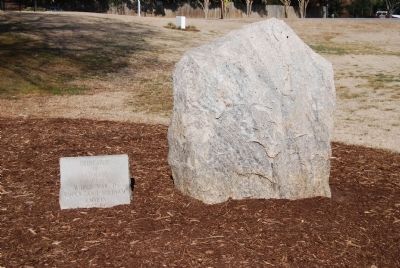