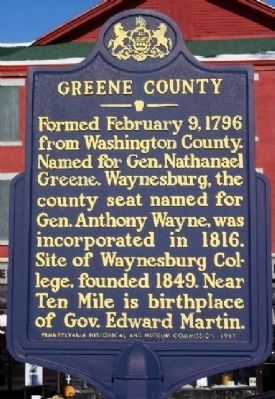 Topics and series. This historical marker is listed in this topic list: Education. In addition, it is included in the Pennsylvania Historical and Museum Commission series list. A significant historical date for this entry is February 9, 1807.

Location. 39° 53.781′ N, 80° 11.208′ W. Marker is in Waynesburg, Pennsylvania, in Greene County. Marker is at the intersection of High Street (U.S. 19) and Washington Street, on the right when traveling east on High Street. Marker is on the county courthouse grounds. Touch for map. Marker is in this post office area: Waynesburg PA 15370, United States of America. Touch for directions. 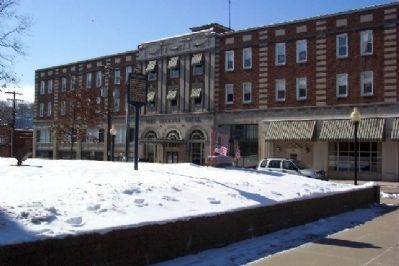 Also see . . .
1. County Courthouses of Pennsylvania. 2001 book by Oliver P. Williams. “When the courthouse [, a copy of the one in Fayette County,] was built [in 1852], David Blythe, who sculpted the Lafayette statue for Fayette County, was invited to make one of Greene for this courthouse. However, his price of $300 was deemed too high by the Greene County commissioners. They found a local woodworker named Bradley Mahanna, who agreed to make one for $100.” (Submitted on June 28, 2009, by J. J. Prats of Powell, Ohio.)

2. Greene County - Behind the Marker. ExplorePAHistory.com (Submitted on July 19, 2011, by Mike Wintermantel of Pittsburgh, Pennsylvania.) 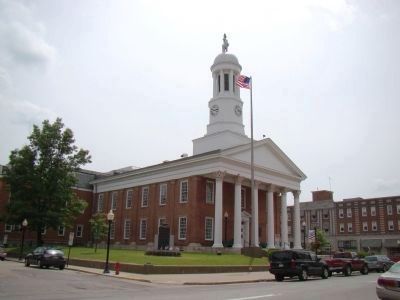 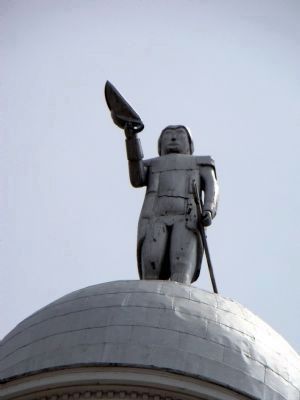