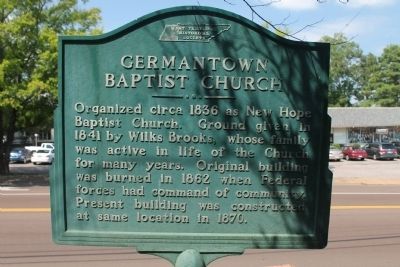 Organized circa 1836 as New Hope Baptist Church. Ground given in 1841 by Wilks Brooks, whose family was active in life of the Church for many years. Original building was burned in 1862 when Federal forces had command of community. Present building was constructed at same location in 1870.

Location. Marker has been reported missing. It was located near 35° 5.31′ N, 89° 48.634′ W. Marker was in Germantown, Tennessee, in Shelby County. Marker was on South Germantown Road just north of North Street, on the right when traveling north. Touch for map. Marker was at or near this postal address: 2216 S Germantown Rd, Germantown TN 38138, United States of America. Touch for directions. 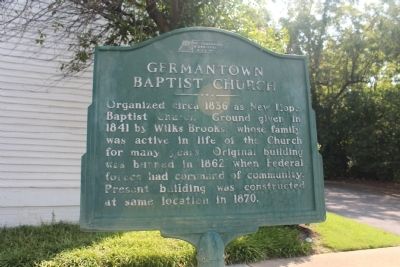 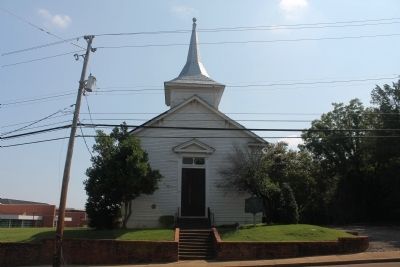 By Judy King, September 5, 2014
3. Germantown Baptist Church Marker
Credits. This page was last revised on December 28, 2020. It was originally submitted on September 5, 2014, by Darren Jefferson Clay of Duluth, Georgia. This page has been viewed 438 times since then. Last updated on December 17, 2020, by Darren Jefferson Clay of Duluth, Georgia. Photos:   1, 2, 3. submitted on September 5, 2014, by Judy King of Pittsburgh, Pennsylvania. • Devry Becker Jones was the editor who published this page.
Share This Page.