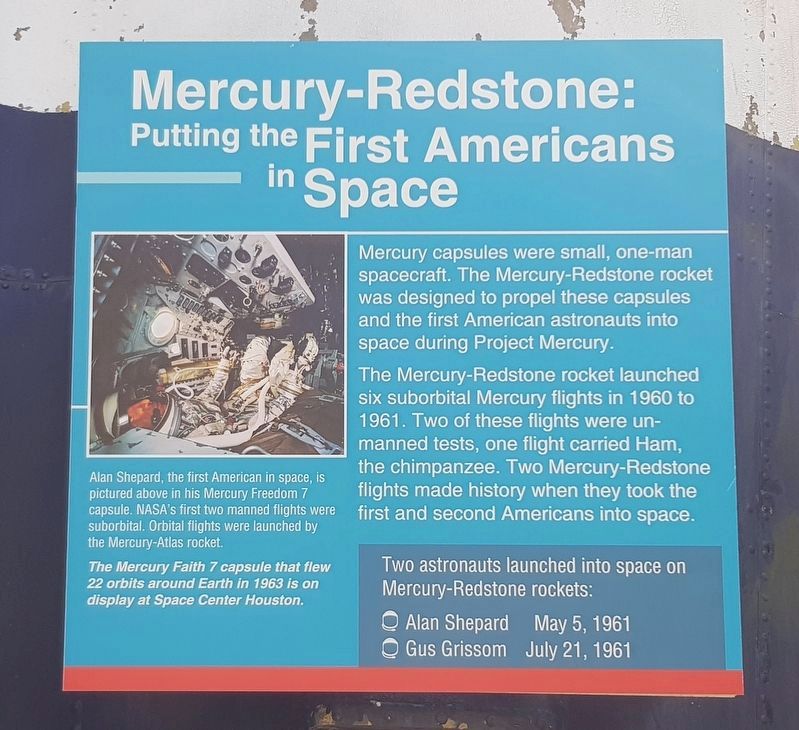 The Mercury-Redstone rocket launched six suborbital Mercury flights in 1960 to 1961. Two of these flights were un-manned tests, one flight carried Ham, the chimpanzee. Two Mercury-Redstone flights made history when they took the first and second Americans into space.

Alan Shepard, the first American in space, is pictured above in his Mercury Freedom 7 capsule. NASA's first two manned flights were suborbital. Orbital flights were launched by the Mercury-Atlas rocket. 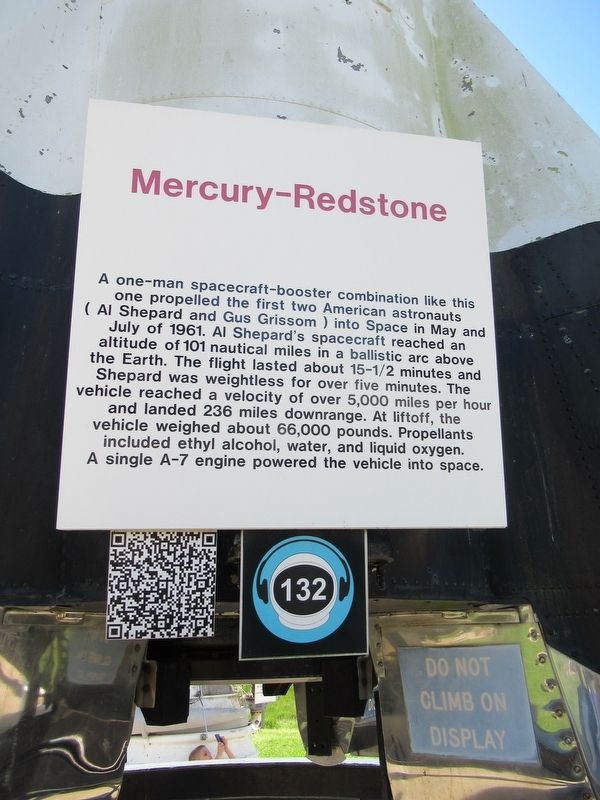 A one-man spacecraft-booster combination like this one propelled the first two American astronauts (Al Shepard and Gus Grissom) into Space in May and July of 1961. Al Shepard's spacecraft reached an altitude of 101 nautical miles in a ballistic arc above the Earth. The flight lasted about 15-1/2 minutes and Shepard was weightless for over five minutes. The vehicle reached a velocity of over 5,000 miles per hour and landed 236 miles downrange. At liftoff, the vehicle weighed about 66,000 pounds. Propellants included ethyl alcohol, water, and liquid oxygen. A single A-7 engine powered the vehicle into space.

Click or scan to see
this page online
5.623′ W. Marker is in Houston, Texas, in Harris County. Marker is on East NASA Parkway, half a mile north of Point Lookout Drive, on the right when traveling west. Located next to the Saturn Rocket Building in Johnson Space Flight Center. Touch for map. Marker is at or near this postal address: 2101 NASA Road 1, Houston TX 77058, United States of America. Touch for directions.

More about this marker. This marker is in Rocket Park on the grounds of the Johnson Space Center. Rocket Park and thus this marker are not readily open to the public. Access is by way of Space Center Houston (entertainment center) which is pricey. There's a fee to get in, and another fee to take a tram ride through the Space Center where the Rocket Park is a stop. 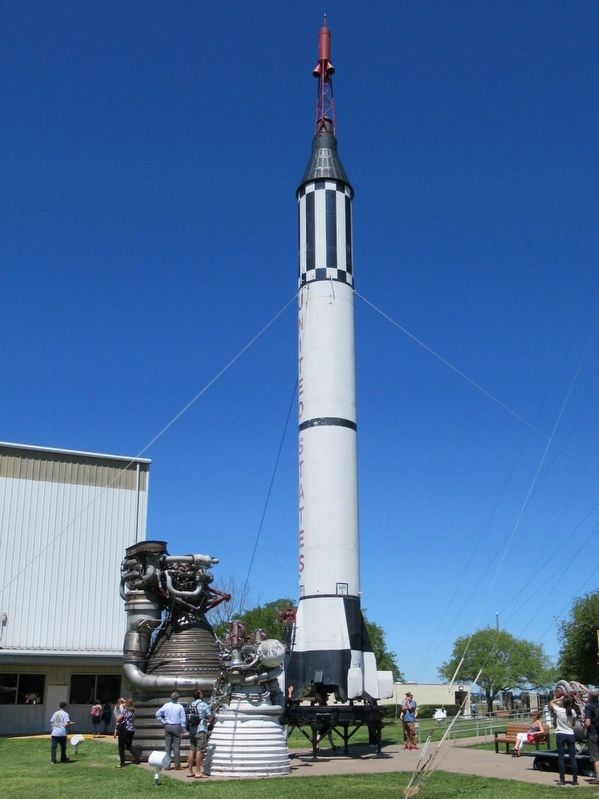 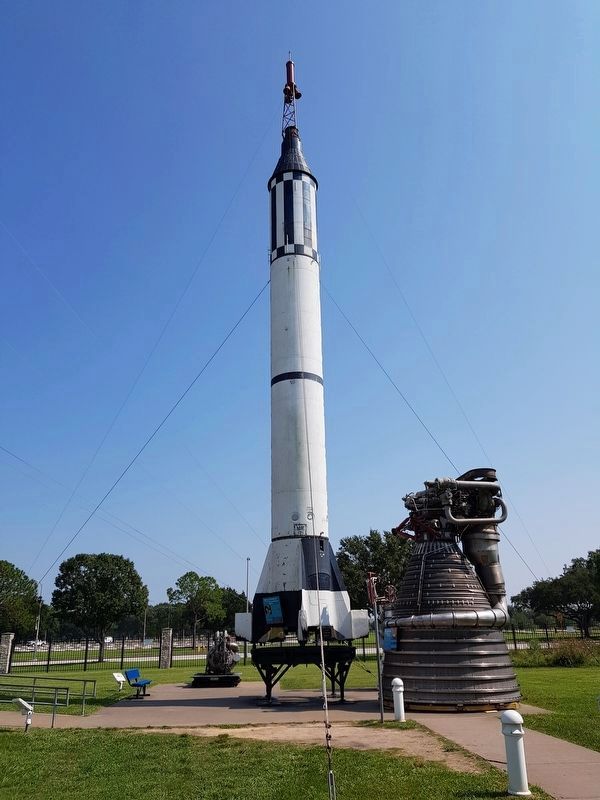 Photographed By J. Makali Bruton, October 5, 2019
4. Mercury-Redstone: Putting the First Americans in Space Marker
Note the marker on the rocket's base in this view. 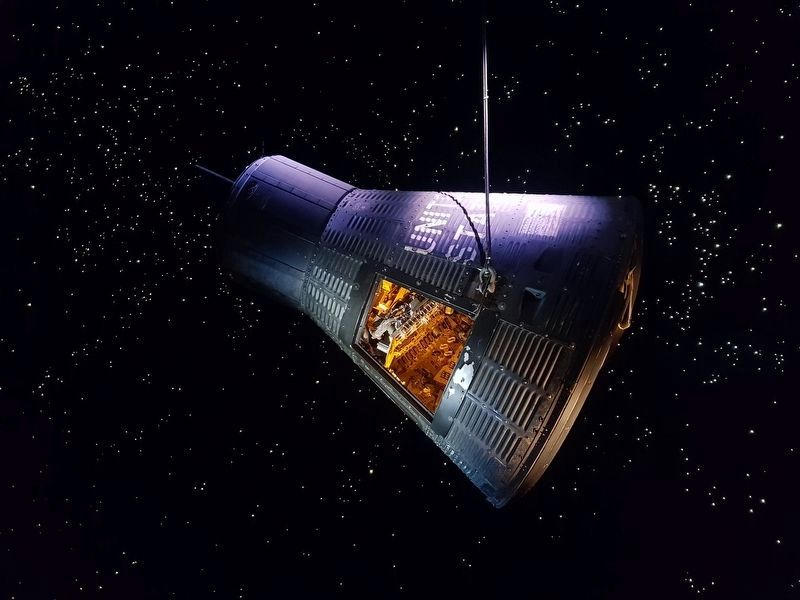