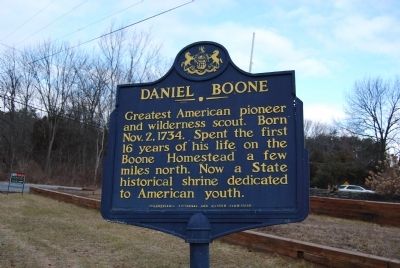 By Mike Wintermantel, January 19, 2014
1. Daniel Boone Marker
Inscription.
Daniel Boone. . Greatest American pioneer and wilderness scout. Born Nov. 2, 1734. Spent the first 16 years of his life on the Boone Homestead a few miles north. Now a State historical shrine dedicated to American youth. . This historical marker was erected in 1948 by Pennsylvania Historical and Museum Commission. It is in Exeter Township in Berks County Pennsylvania

Topics and series. This historical marker is listed in this topic list: Exploration. In addition, it is included in the Pennsylvania Historical and Museum Commission series list. 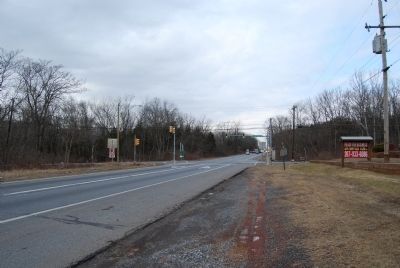 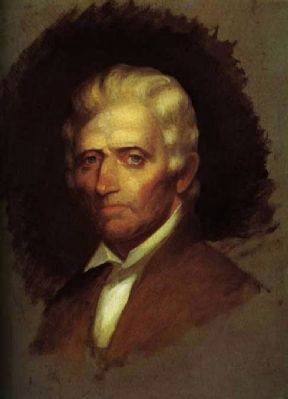 By Chester Harding, June 1820
3. Daniel Boone
Oil sketch of Daniel Boone by Chester Harding, the only portrait of Boone painted from life. This was painted when Boone was 84 years old, a few months before his death. Harding painted Boone in June 1820 while Boone was living with his daughter Jemima Boone Callaway in Missouri. According to historian Ted Franklin Belue, "from this original oil portrait Harding made three copies: two busts and a full-length." (The Life of Daniel Boone by Lyman Draper, edited by Ted Franklin Belue. Mechanicsburg, PA: Stackpole Books, 1998, p. 2.)
Credits. This page was last revised on December 31, 2020. It was originally submitted on January 19, 2014, by Mike Wintermantel of Pittsburgh, Pennsylvania. This page has been viewed 429 times since then and 4 times this year. Last updated on December 26, 2020, by Carl Gordon Moore Jr. of North East, Maryland. Photos:   1, 2. submitted on January 19, 2014, by Mike Wintermantel of Pittsburgh, Pennsylvania.   3. submitted on January 20, 2014, by Mike Wintermantel of Pittsburgh, Pennsylvania. • Bill Pfingsten was the editor who published this page.
Share This Page.