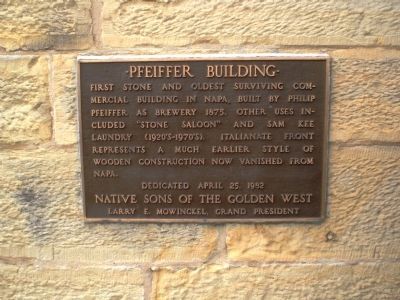 Topics. This historical marker is listed in this topic list: Notable Buildings. A significant historical date for this entry is April 25, 1950.

Location. 38° 18.052′ N, 122° 17.227′ W. Marker is in Napa, California, in Napa County. Marker is at the intersection of Main Street and Clinton Street, on the right when traveling south on Main Street. Touch for map. Marker is at or near this postal address: 1245 Main Street, Napa CA 94559, United States of America. Touch for directions.

Other nearby markers. At least 8 other markers are within walking distance of this marker. Johnson-Doran Building (about 400 feet away, measured in a direct line); Napa - Birthplace of the Loudspeaker and the Magnavox Corp. (about 700 feet away); Winship Building 1888 (approx. 0.2 miles away); Semorile Building 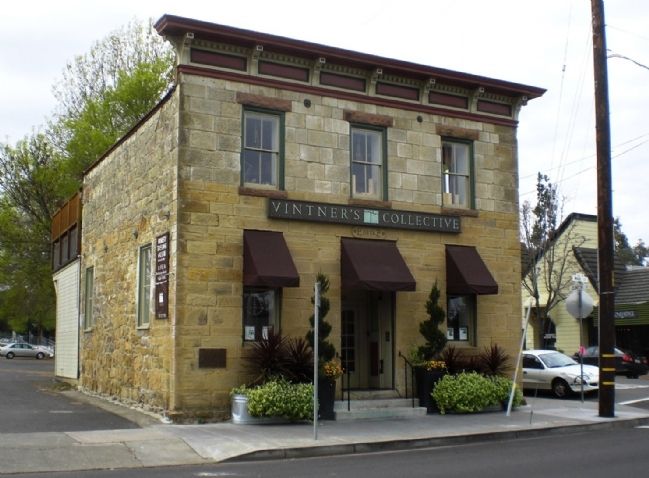 More about this marker. The marker is almost on the lefthand corner of the building.

Regarding Pfeiffer Building. The Pfeiffer Building started out as the Barth Brewery in 1875. In the 1890's it became the Stone Saloon, complete with brothel upstairs. In the 1920's it became Sam Kee's Laundry. From 1976 to 1999 it housed the Andrews Meat Company and Deli. From 2002 onwards it has been home to the Vintner's Collective, an outlet for local wineries. The building was placed on the National Register of Historic Places in 1974.