(Member of the first Railroad Commission of Texas) 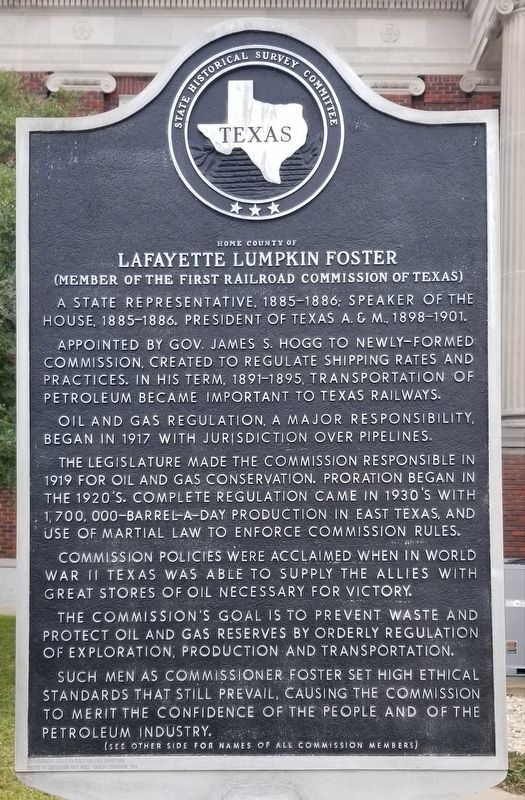 A state representative, 1885-1886; Speaker of the House, 1885-1886. President of Texas A. & M., 1898-1901. Appointed by Gov. James S. Hogg to newly-formed commission, created to regulate shipping rates and practices. In his term, 1891-1895, transportation of petroleum became important to Texas railways. Oil and gas regulation, a major responsibility, began in 1917 with jurisdiction over pipelines. The Legislature made the commission responsible in 1919 for oil and gas conservation. Proration began in the 1920s. Complete regulation in east Texas, and use of martial law to enforce commission rules. Commission policies were acclaimed when in World War II Texas was able to supply the allies with great stores of oil necessary for victory. The commission's goal is to prevent waste and protect oil and gas reserves by orderly regulation of exploration, production and transportation. Such men as Commissioner Foster set high ethical standards that still prevail, causing the commission to merit the confidence of the people and of the petroleum industry.

Reverse
Members of the Railroad Commission of Texas

By James Hulse, January 8, 2021
3. Home County of Lafayette Lumpkin Foster Marker
Street (State Highway 14) and West State Street, on the right when traveling north on Ellis Street. Touch for map. Marker is at or near this postal address: 200 West State Street, Groesbeck TX 76642, United States of America. Touch for directions.

Also see . . .
1. Lafayette Lumpkin Foster (1851–1901). He moved to Texas at the age of eighteen and lived successively in the Limestone County communities of Horn Hill and Springfield. He worked at cotton picking or bricklaying until he had saved enough money to attend Waco University.  Source: The Handbook of Texas (Submitted on January 15, 2021, by James Hulse of Medina, Texas.)