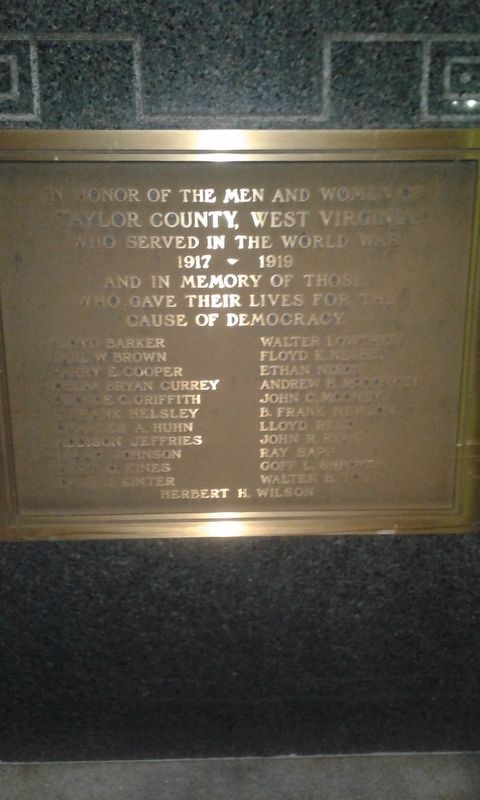 In honor of the men and women of Taylor County, West Virginia who served in the World War

Location. 39° 20.782′ N, 80° 0.245′ W. Marker is in Grafton, West Virginia, in Taylor County. Memorial is at the intersection of Northwestern Turnpike (U.S. 50) and Victory Avenue (U.S. 119), on the right when traveling east on Northwestern Turnpike. The marker is on the grounds of the Grafton Common. Touch for map. Marker is in this post office area: Grafton WV 26354, United States of America. Touch for directions.

Other nearby markers. At least 8 other markers are within 3 miles of this marker, measured as the crow flies. Federal Dam (here, next to this marker); Grafton 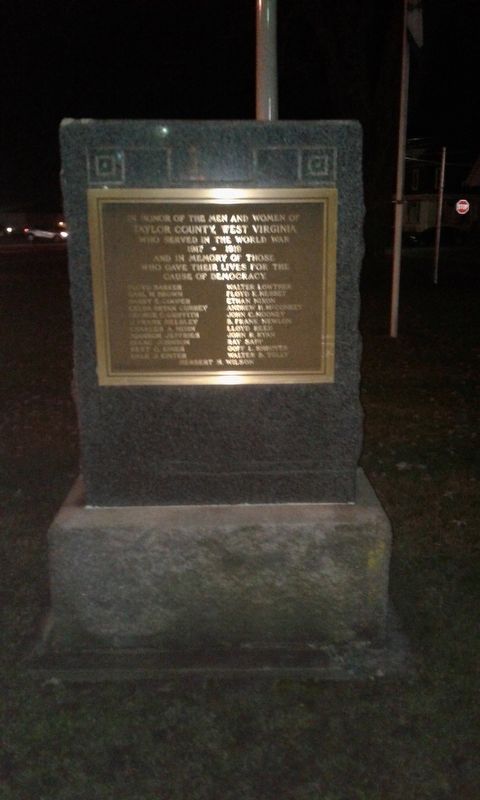 By TeamOHE, November 23, 2018
2. Taylor County World War Veterans Memorial
(a few steps from this marker); Fallen But Not Forgotten (a few steps from this marker); The First Campaign (approx. one mile away); a different marker also named Grafton (approx. one mile away); Old Catholic Cemetery (approx. 1.1 miles away); Valley Falls (approx. 1.8 miles away); Dedicated to the Memory of Thornsbury Bailey Brown (approx. 2.2 miles away). Touch for a list and map of all markers in Grafton.
Credits. This page was last revised on January 28, 2021. It was originally submitted on January 17, 2021, by TeamOHE of Wauseon, Ohio. This page has been viewed 35 times since then. Photos:   1, 2. submitted on January 17, 2021, by TeamOHE of Wauseon, Ohio. • J. Makali Bruton was the editor who published this page.
Share This Page.