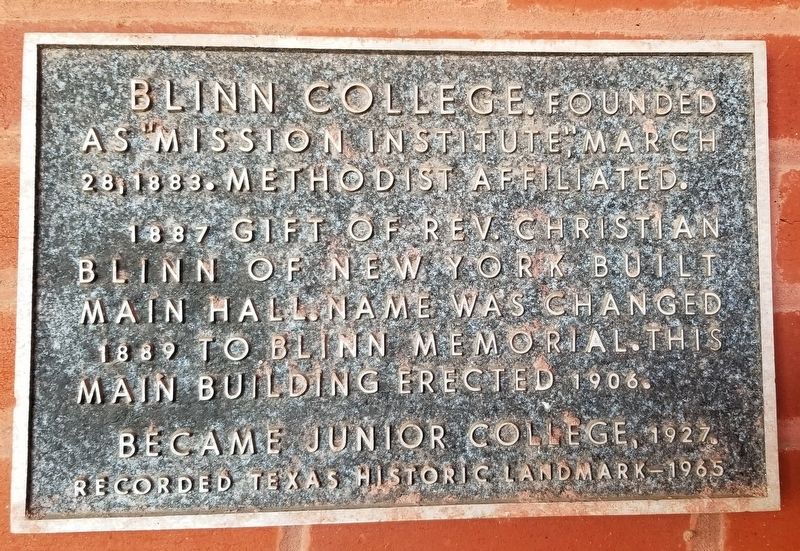 Topics. This historical marker is listed in this topic list: Education. A significant historical date for this entry is March 28, 1883.

Location. 30° 9.574′ N, 96° 24.329′ W. Marker is in Brenham, Texas, in Washington County. Marker is at the intersection of College Avenue and High Street, on the right when traveling west on College Avenue. The marker is located at the front door of the Old Main building. Touch for map. Marker is at or near this postal address: 800 College Avenue, Brenham TX 77833, United States of America. Touch for directions.

Other nearby markers. At least 8 other markers are within walking distance of this marker. Brenham Presbyterian Church (about 700 feet away, measured in a direct line); Mt. Zion United Methodist Church (approx. 0.2 miles away); Prairie Lea Cemetery (approx. 0.3 miles away); Moses Baine

Photographed By James Hulse, January 16, 2021
2. Blinn College Marker
The marker and medallion have been separated at the doorway.

Also see . . .  Blinn College. Originally Mission Institute, was founded in Brenham in 1883 by the Southern German Conference of the Methodist Episcopal Church to train ministers for the mission conference. President Carl Urbantke and the original class of three students met in the German Methodist Church. After four years of operation the struggling school received a boost when Christian Blinn of New York pledged financial support, including funds for a two-story building. In gratitude, the Methodist annual conference for 1889 changed the name of the institution to Blinn Memorial College. Source: The Handbook of Texas (Submitted on January 21, 2021, by James Hulse of Medina, Texas.)