Site of the first Permanent Settlement in Texas 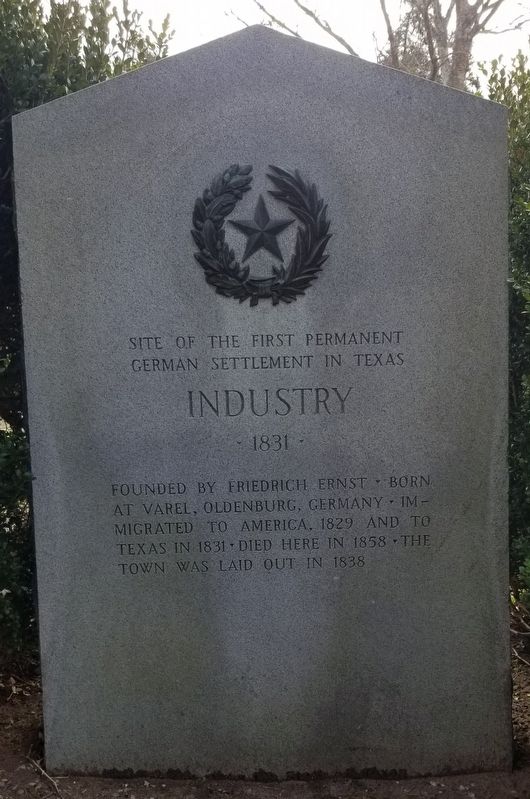 Location. 29° 58.7′ N, 96° 30.214′ W. Marker is in Industry, Texas, in Austin County. Marker is on Schroeder Road ¼ mile west of Ernst Parkway (Farm to Market Road 109), on the left when traveling west. The marker is located in the front section of the Ernst Memorial Park. Touch for map. Marker is in this post office area: Industry TX 78944, United States of America. Touch for directions.

Also see . . .  Industry, Texas. Its first residents were Johann Friedrich Ernst and his family, who had come from Germany, briefly resided in New York, and en route to Missouri learned about free land available in Texas. The Mexican government granted Ernst a league of land on April 16, 1831, and Charles Fordtran, who had accompanied the family to Texas, received a quarter of it as payment for surveying the entire tract. Ernst established his home on the eastern part of his league near the main road from San Felipe to Bastrop. "Ernst's Place" established a reputation as a resting place for immigrants and travelers.  Source: The Handbook of Texas (Submitted on January 24, 2021, by James Hulse of Medina, Texas.)
Credits. This page was last revised on January 24, 2021. It was originally submitted on January 23, 2021, by James Hulse of Medina, Texas. This page has been viewed 30 times since then. Photos:   1, 2. submitted on January 24, 2021, by James Hulse of Medina, Texas. • J. Makali Bruton was the editor who published this page.
Share This Page.