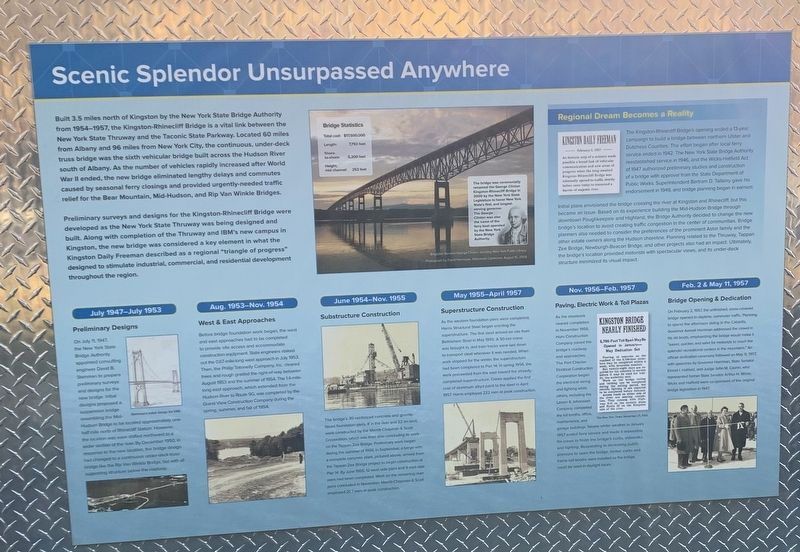 Built 3.5 miles south of Kingston by the New York State Bridge Authority from 1954-1957, the Kingston-Rhinecliff Bridge is a vital link between the New York State Thruway and the Taconic State Parkway. Located 60 miles from Albany and 96 miles from New York City, the continuous, under-deck truss bridge was the sixth vehicular bridge built across the Hudson River south of Albany. As the number of vehicles rapidly increased after World War II ended, the new bridge alleviated lengthy delays and commutes caused by seasonal ferry closings and provided urgently needed traffic relief for the Bear Mountain, Mid-Hudson, and Rip Van Winkle Bridges.

Preliminary surveys and designs for the Kingston-Rhinecliff Bridge were developed as the New York Thruway was being designed and built. Along with completion of the Thruway and IBM's new campus in Kingston, the new bridge was considered a key element in what the Kingston Daily Freeman described as a regional "triangle of progress" designed to stimulate industrial, commercial, and residential development throughout the region. 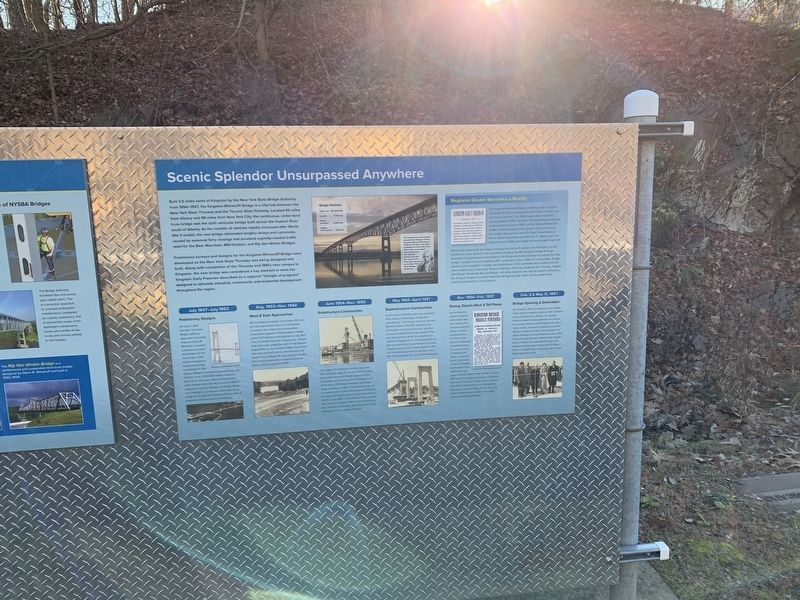 Top Right
Regional Dream Becomes a Reality
The Kingston-Rhinecliff Bridge opening ended a 13-year campaign to build a bridge between northern Ulster and Dutchess Counties. The effort began after local ferry service ended in 1942. The New York State Bridge Authority reestablished service in 1946, and the Wicks-Hatfield Act of 1947 authorized preliminary studies and construction of a bridge with approval from the State Department of Public Works. Superintendent Bertram D. Tallamy gave his endorsement in 1949, and the bridge planning began in earnest.

Initial plans envisioned the bridge crossing the river at Kingston and Rhinecliff, but this became an issue. Based on its experience of building the Mid-Hudson Bridge through downtown Poughkeepsie and Highland, the Bridge 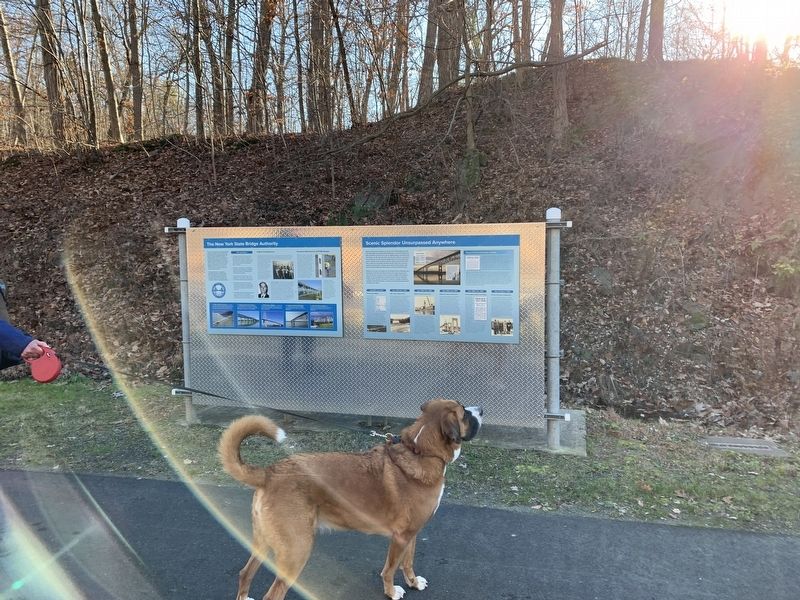 By Steve Stoessel, December 6, 2020
3. Scenic Splendor Unsurpassed Anywhere Marker
Authority decided to change the new bridge’s location to avoid creating traffic congestion in the center of the communities. Bridge planners also needed to consider the preferences of the prominent Astor family and other estate owners along the Hudson shoreline. Planning related to the Thruway, Tappan Zee Bridge, Newburgh-Beacon Bridge and other projects also had an impact. Ultimately, the bridge’s location provided motorists with spectacular views, and its under-deck structure minimized its visual impact.

Newspaper Inset:
Kingston Daily Freeman
February 2, 1957
An historic snip of a scissors made possible a broad link of vehicular communications and new areas of progress when the long awaited Kingston-Rhinecliff Bridge was informally opened to traffic shortly before noon to transcend the barrier of a majestic river.

Below (Left to Right):
July 1947-July 1953
Preliminary Designs
On July 11, 1947, the New York State Bridge Authority appointed consulting engineer David B. Steinman to prepare preliminary surveys and designs for the new bridge. Initial designs proposed a suspension bridge resembling the Mid-Hudson Bridge to be located approximately one-half mile north of Rhinecliff Station. However, the location soon shifted northward to a wider section of the river. By December 1950, in response to the new location, the bridge design had changed to a continuous under-deck truss like the Rip Van Winkle Bridge but with all supporting structure below the roadway.

Aug. 1953-Nov. 1954
West & East Approaches
Before the bridge foundation work began, the west and east approaches had to be completed to provide access and accommodate construction equipment. State engineers staked out the 0,67 mile-long west approach in July 1953. Then the Phillip Totonelly Company, Inc. cleared trees and rough grade the right-of-way between August 1953 and the summer of 1954. The 1.4 mile long east approach, which extended from the Hudson river to Route 9G, was completed by the Grand View Construction Company during the spring, summer and fall of 1954.

June 1954-Nov. 1955
Substructure Construction
The bridge’s 30 reinforced concrete and granite faced foundation piers, 8 in the river and 22 on land, were constructed by the Merritt Chapman & Scott Corporation, which was then also concluding its work on the Tappen Zee Bridge. Preliminary work began during the summer of 1954. In September, a barge with a complete concrete plant, pictured above, arrived from the Tappen Zee Bridge project to begin construction at Pier 14. By June 1955, 12 west side piers and 9 east side piers had been completed. Work on the remaining river piers concluded in November. Merritt & Scott employed 207 men at peak construction.

May 1955-April 1957
Superstructure Construction
As the western foundation piers were completed, Harris Structural Steel began erecting the superstructure. The first steel arrived on site from Bethlehem Steel in May 1955. A 50-ton crane was brought in, and train tracks were laid down to transport steel wherever it was needed. When work stopped for the winter, the superstructure had been completed to Pier 14. In spring 1956, the work proceeded from the east toward the already completed superstructure. Crews applied the first coat of aluminum alkyd paint to the steel in April 1957. Harris employed 222 men at peak construction.

Nov. 1956 – Feb. 1957
Paving, Electric Work and Toll Plazas
As the steelwork neared construction in November 1956, Horn Construction Company paved the bridge’s roadway and approaches. The Port Chester Electrical Construction Corporation began the electrical wiring and lighting while others, including Larsen & Johanssen Company completed the toll booths, office, maintenance and garage buildings. Severe winter weather in January 1957 ended ferry service and made it impossible for the crews to finish the bridge’s curbs, sidewalks, and lighting. Responding to public pressure to open the bridge, timber curbs and frame tollbooths were installed so the bridge could be used during daylight hours.

Newpaper Inset:
New York Times
November 25, 1958
Kingston Bridge Nearly Finished
5,700 Foot Toll Span May Be
Opened in January
May Dedication Set
Pouring of concrete on the roadbed of the 5,700-foot structure may be completed within a week with favorable winter weather.
But twenty-eight days are required for the concrete to harden before it may be used for traffic, the authority said.
Work on the bridge roadway and curbing can be completed during the setting period, but electric lighting is not expected to be completed before January.
Access roads on either side of the river are nearing completion. They connect with Highway 9G on the eastern shore and Route 32 on the Kingston side of the river.

Feb. 2 & May11, 1957
Bridge Opening and Dedication
On February 2, 1957, the unfinished, snow-covered bridge opened to daylight commuter traffic. Planning to spend the afternoon skiing in the Catskills, Governor Averell Harriman addressed the crowd in his ski boots, emphasizing the bridge would make it “easier, quicker, and safer for motorists to reach the splendid recreational centers in the mountains.” An official dedication ceremony followed on May 11, 1957 with speeches by Governor Harriman, State Senator Ernest I. Hatfield, and Judge John M. Cashin, who represented former State Senator Arthur H. Wicks. Wicks and Hatfield were co-sponsors of the original bridge legislation in 1947.