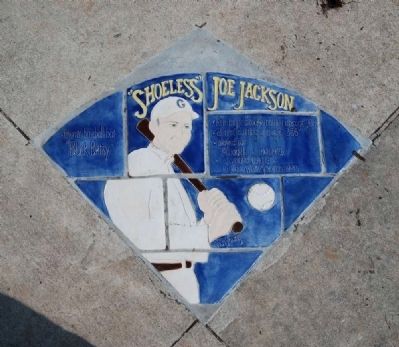 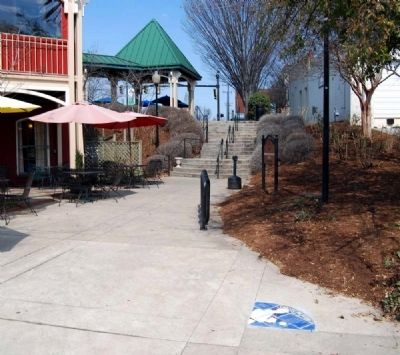 More about this marker. The Philadelphia team was the Athletics. 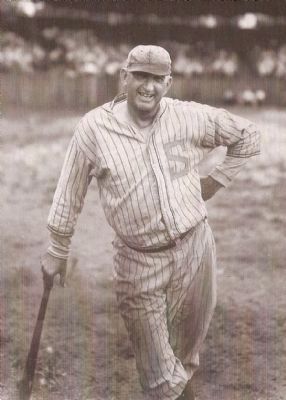 William B. Coxe Collection, Greenville County Historical Society
3. Joseph Jefferson "Shoeless Joe" Jackson
July 16, 1888 – December 5, 1951
Carolina Piedmont, was the son of a tenant farmer who found his way into the textile mill. Born in 1888 in Pickens County, Jackson moved with his parents and their nine children to Brandon Mill, where Joe went to work at age thirteen. Unable to read or write, he showed promise as a baseball player and joined the Brandon team-first as catcher, then pitcher, and eventually as an outfielder. In 1907 Jackson was spotted by Tom Stauch, who soon became manager of the Greenville Spinners. Stauch hired Jackson for the handsome salary of seventy-five dollars a month, almost double his pay at Brandon.

Playing for the Spinners, Jackson made his reputation as a hitter and gained a nickname. Wearing a new pair of spiked shoes that hurt his feet, he decided to play in his stocking feet. No one noticed until the seventh inning when Jackson hit a triple. Someone called him "Shoeless Joe," and the name stuck. Near the end of the season Connie Mack gave Jackson a major league contract for $325, and his reputation as a hitter soared. Washington pitcher Walter Johnson once said that he considered Jackson the greatest natural ballplayer he had ever seen. In 1915 Charles Comiskey secured him for the Chicago White Sox for sixty-five thousand dollars.

Jackson became part of a fast, new culture accustomed to money and flashy clothes. He purchased a pool hall and a farm in Greenville, 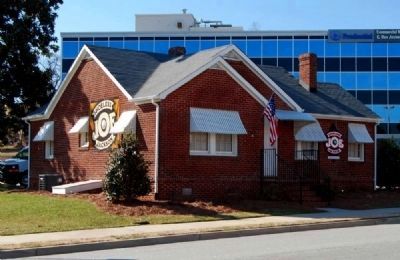 By Brian Scott, February 20, 2010
4. Shoeless Joe Jackson Museum and Library
Originally located at 119 East Wilburn Street, Greenville, the brick house was moved in 2006 to its present location on Field Street, across from the south side of Flour Stadium.
Click for more information.
as well as a house for his parents in Brandon. But his salary was never more than six thousand dollars. During the 1919 World Series, Jackson and seven of his teammates agreed to throw the series as their only defense against Comiskey. On September 28, 1920, Jackson appeared before the grand jury in Chicago and testified that he had received only five thousand dollars for his part in the conspiracy. According to the Chicago Herald and Examiner, "as Jackson departed from the Grand Jury room, a small boy clutched at his sleeve and tagged along after him. 'Say it ain't so, Joe,' he pleaded. 'Say it ain't so.'" Jackson was reported to have replied: "Yes, kid, I'm afraid it is."

The Black Sox case did not come to trial until 1921. On August 2 the jury found Jackson and the others not guilty. But the baseball commissioner, Judge Kennesaw Mountain Landis, ended the celebration. "Regardless of the verdict of juries," he said, "no player who throws a ballgame ... will ever play professional baseball.

"Shoeless Joe" Jackson returned to Savannah where he and his wife Katie lived in the off-seasons, and played semiprofessional baseball. In 1929 the Jacksons moved to Greenville, and Joe opened a dry-cleaning business and continued to play semiprofessional baseball in the summers. In 1933 the Greenville club rejoined organized baseball and offered Jackson the position of player-manager, but Judge Landis refused to alter his ruling. In his last years, Jackson operated a liquor store and played baseball with the neighborhood children. He died on December 5, 1951, at the age of sixty three. His funeral was held in the Baptist church in Brandon where he had lived as a young man. (Source: Greenville: The History of the City and County in the South Carolina Piedmont by Archie Vernon Huff, Jr. (1995), pgs 299-300.)
— Submitted October 19, 2010, by Brian Scott of Anderson, South Carolina.