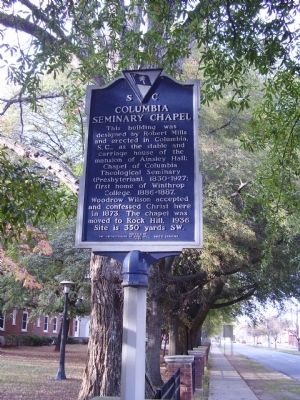 Photographed By Stanley and Terrie Howard, October 12, 2008
1. COLUMBIA SEMINARY CHAPEL Marker
Inscription.
Columbia Seminary Chapel. . , This building was designed by Robert Mills and erected in Columbia, S.C., as the stable and carriage house of the mansion of Ainsley Hall; Chapel of Columbia Theological Seminary (Presbyterian), 1830-1927; first home of Winthrop College, 1886-1887. Woodrow Wilson accepted and confessed Christ here in 1873. The chapel was moved to Rock Hill, 1936. Site is 350 yards S.W. . This historical marker was erected in 1987 by Presbyterians of Rock Hill, South Carolina. It is in Rock Hill in York County South Carolina

This building was designed by Robert Mills and erected in Columbia, S.C., as the stable and carriage house of the mansion of Ainsley Hall; Chapel of Columbia Theological Seminary (Presbyterian), 1830-1927; first home of Winthrop College, 1886-1887. Woodrow Wilson accepted and confessed Christ here in 1873. The chapel was moved to Rock Hill, 1936. Site is 350 yards S.W.

Topics and series. This historical marker is listed in these topic lists: Education • Notable Buildings. In addition, it is included in the Former U.S. Presidents: #28 Woodrow Wilson series list. A significant historical year for this entry is 1873.

Other nearby markers. At least 10 other markers are within one mile of this marker, measured as the crow flies. First Home of Winthrop College (approx. 0.2 miles away); McCorkle-Fewell-Long House / Oakland (approx. ¼ mile away); President's House 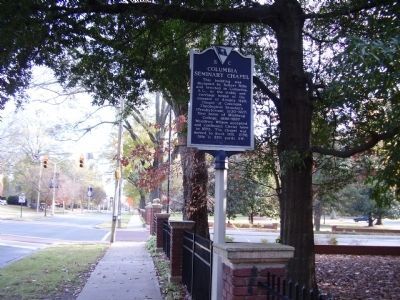 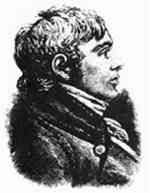 Photographed By Stanley and Terrie Howard, circa 2009
3. Robert Mills
(1781-1855)
Born in Charleston, South Carolina, Mills moved to Philadelphia in 1802 where he became an associate and student of Benjamin Henry Latrobe. He gradually became known in his own right. In 1820, he was appointed as acting commissioner of the Board of Public Works in South Carolina. In 1823, Mills was the superintendent of public buildings. In the next few years, he designed numerous buildings in South Carolina including court houses, the campus of the University of South Carolina, jails, and the Fireproof Building in Charleston. 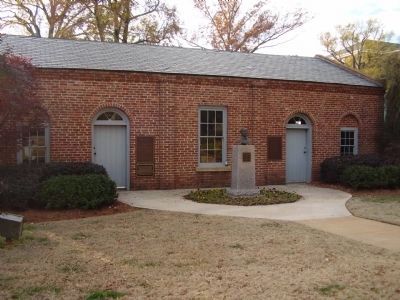 Photographed By Stanley and Terrie Howard, 2009
4. Columbia Seminary Chapel
In 1830, the mansion was acquired by the Presbyterian Synod of South Carolina and Georgia for a seminary campus, and the carriage house was converted into a chapel for the Columbia Theological Seminary. The main arched doorway was removed and replaced with a smaller rectangular window. Additional sash windows were probably added then to light the chapel, but this is not documented. These windows probably were not in place during the building’s time as a stable. The stalls were removed and replaced with pews and a pulpit on a raised wood floor for the chancel. The ca. 1830 chapel remains basically unaltered. In 1886, David Bancroft Johnson requested the use of the Little Chapel as a classroom for the inaugural academic year of Winthrop Training School. The Seminary was closed because of an internal religious dispute. Permission was granted by the Presbyterian Church and the Little Chapel became the birthplace of Winthrop as an institution. The Little Chapel only served Winthrop as a classroom during its inaugural year. In the fall of 1887, the Winthrop Training School moved to a much larger building on Marion Street in Columbia, SC which contained four large rooms and the chapel returned to its prior use as a religious center for the Columbia Theological Seminary. In 1927, the seminary moved to Decatur, GA. and the Little Chapel was left vacated. With pleas from the Winthrop Alumnae Association, Winthrop began a campaign to have the structure moved to Rock Hill. Their efforts were rewarded when the Seminary Board of Directors presented the Chapel to Winthrop on May 7, 1936. Plans were then set into motion to transport the building, brick by brick, to the Winthrop campus in Rock Hill, SC.
Credits. This page was last revised on June 16, 2016. It was originally submitted on March 6, 2009, by Stanley and Terrie Howard of Greer, South Carolina. This page has been viewed 1,044 times since then and 19 times this year. Photos:   1, 2, 3, 4. submitted on March 6, 2009, by Stanley and Terrie Howard of Greer, South Carolina. • Bill Pfingsten was the editor who published this page.
Share this page.