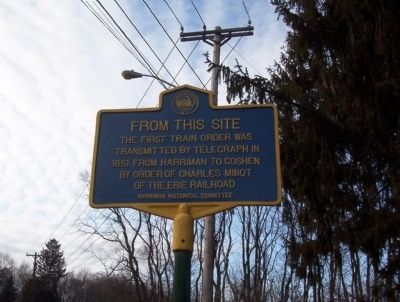 Topics. This historical marker is listed in these topic lists: Communications • Railroads & Streetcars. A significant historical year for this entry is 1851.

Regarding First Train Order Transmitted by Telegraph. Adjacent to 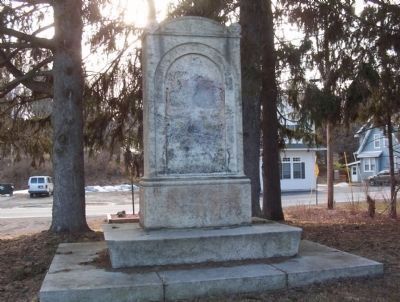 Photographed By Mary Ellen Coghlan, May 16, 2002
2. The original Monument to Charles Minot
The First Train Order Transmitted by Telegraph post marker can be seen in the background. The original monument hosted a bronze table that read:
From this station
Charles Minot
General Superintendent
of the
New York and Erie Railroad
1851
Issued the first train order transmitted by telegraph
To Agent and Operator at Goshen,
“Hold the train for further orders”
To Conductor and Engineer, Day Express
“Run to Goshen regardless of opposing train”

Click or scan to see
this page online
the marker is a granite and bronze monument erected on May 12, 1912. As described in the internet link provided below, the original bronze plaque has been missing since 1996.

Additional commentary.
1. Former train station
The Tudor-style train station at this site was erected in 1911 on land donated by E.H. Harriman, a former director of the railroad. It was demolished in May 2006 after years of neglect.
— Submitted March 15, 2009, by Mary Ellen Coghlan of Warwick, New York. 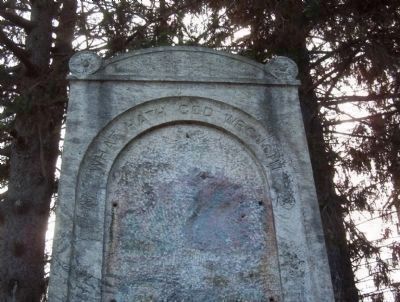