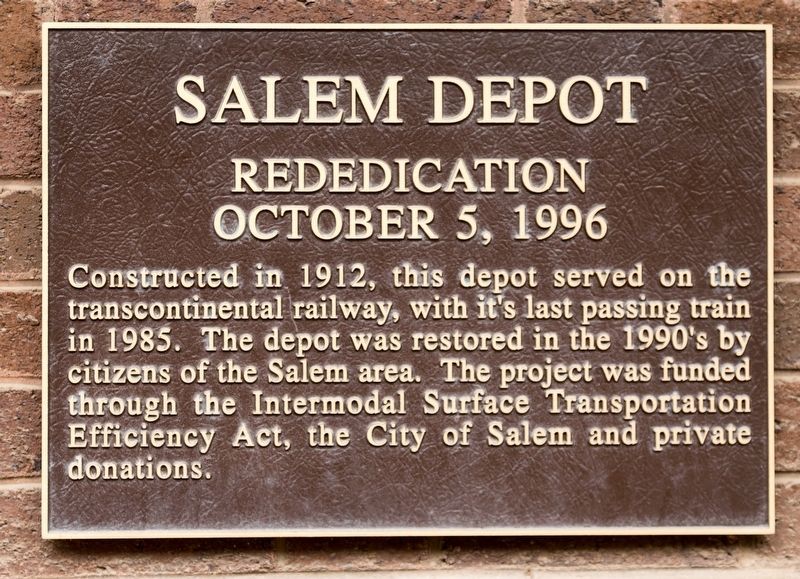 By J. J. Prats, April 11, 2021
1. Salem Depot Marker
Inscription.
Salem Depot. Rededication October 5, 1996. Constructed in 1912, this depot served on the transcontinental railway, with its last passing train in 1985. The depot was restored in the 1990's by citizens of the Salem area. The project was funded through the Intermodal Surface Transportation Efficiency Act, the City of Salem and private donations. . This historical marker is in Salem in Harrison County West Virginia

Constructed in 1912, this depot served on the transcontinental railway, with its last passing train in 1985. The depot was restored in the 1990's by citizens of the Salem area. The project was funded through the Intermodal Surface Transportation Efficiency Act, the City of Salem and private donations.

Topics. This historical marker is listed in this topic list: Railroads & Streetcars. A significant historical year for this entry is 1912.

Location. 39° 16.928′ N, 80° 33.443′ W. Marker is in Salem, West Virginia, in Harrison County. Marker can be reached from East Main Street (Local Route 50/73) west of South Street, on the right when traveling west. It faces the North Bend Rail-Trail. There is parking here for hiking the trail. Touch for map. Marker is in this post office area: Salem WV 26426, United States of America. Touch for directions.

Other nearby markers. At least 8 other markers are within 15 miles of this marker, measured as the crow flies. Salem (approx. 0.3 miles away); Greenbrier Church & Cemetery (approx. 2.8 miles away); Center Point Covered Bridge (approx. 8½ miles away); Matthew M. Neely (approx. 9.4 miles away); Jackson's Mill (approx. 13.6 miles away); a different 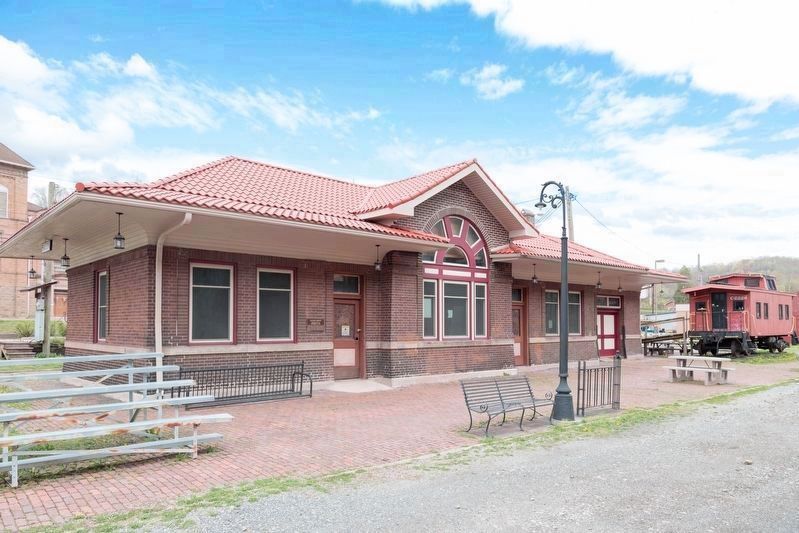 Regarding Salem Depot. A December 1925 schedule shows twelve trains, six in each direction, passing Salem every day. Trains 1 and 2, the westbound and eastbound National Limited all-Pullman, passed in the middle of the night and did not stop. Trains 3 and 4, the New York–Cincinnati–St. Louis Express stopped here. Trains 11, the Middle West Express westbound, and 12, the Metropolitan Special eastbound, stopped here. Trains 21 and 22, the New York–Cincinnati–St. Louis Special stopped here.

Trains 35 and 36 as well as trains 37 and 38 between Grafton and Parkersburg were the morning and afternoon locals that stopped at all stations on their 4½ hour daily journeys. 35 minutes on the east-bound morning local got you to downtown Clarksburg at 11:05 am for department store shopping or an appointment with the doctor and the afternoon westbound local got you back by 6:45 pm. 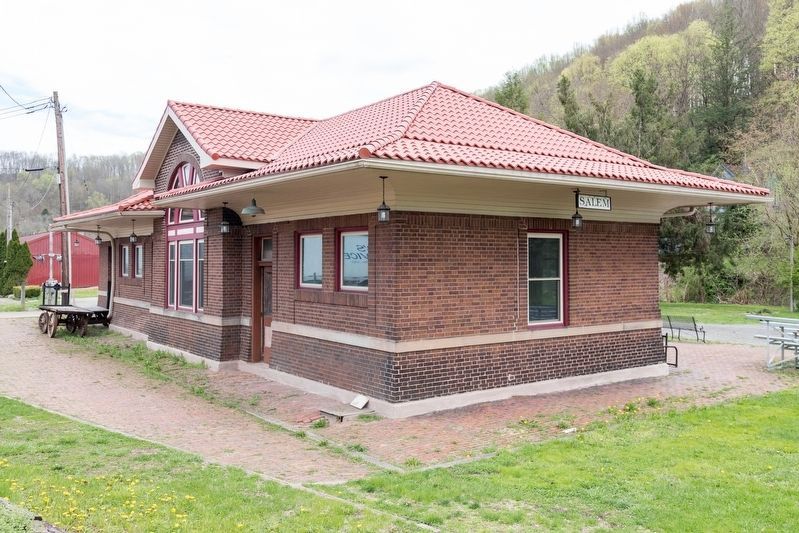 By J. J. Prats, April 11, 2021
3. B&O Salem WV Passenger Depot, Streetside
Click here for another marker that is related to this marker. This is the for the Pennsboro B&O Depot, 26 rail miles (55 minutes by express train) west of here. There is commentary on that page about long distance passenger trains that stopped every day.

Additional commentary.
1. Living on a B&O Main Line
At the end of the 19th century and the first half of the 20th century residents of this small rural town had equal access to the then fastest mode of transportation as those living in large cities: long distance passenger trains. This main line ran from St. Louis to New York via Cincinnati, Washington, Baltimore and Philadelphia. It is stretching things to say this was a transcontinental line, but at any of those large cities and at other junctions in-between there were frequent trains to other large cities and small towns all over the U.S., Canada, and Mexico; and the tickets you bought at this station would get you all the way there. You could even buy tickets that would get you to a tropical island (to Havana, Cuba) at this station until 1935!

Today, how can the 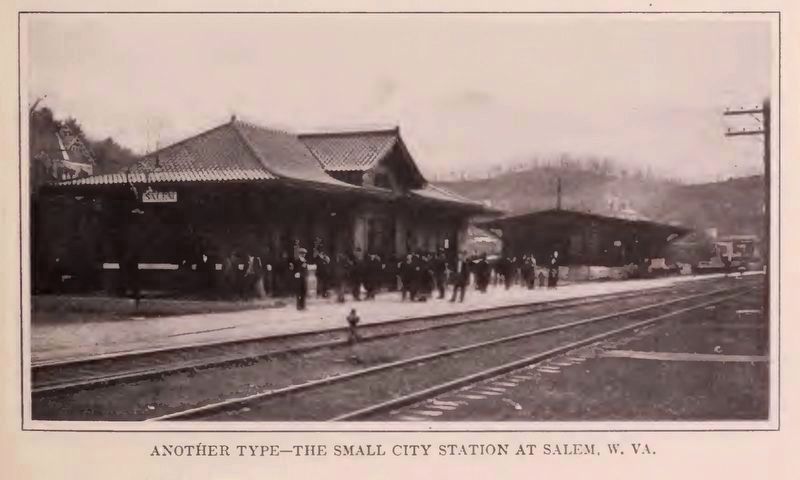 In the Baltimore & Ohio Employees Magazine via Internet Archive, June 1914
4. The “Small-City Station” at Salem W. Va.
people of Salem do long-distance traveling other than by automobile? It is difficult, tiring and costly. Long-distance busses no longer stop at Salem, so the only remaining mode of transportation is the airplane. The nearest commercial airport is 19 miles away, so that's not bad, but it is a second-tier airport (Clarksburg) where one expensive daily flight on a small, noisy, cramped airplane will get you to Washington and another to Chicago; two large airports where you can finally get on a real airplane to your destination.

Want to go to another town in West Virginia from Salem today? You have to change planes in Washington Dulles International Airport, more than 200 miles away, and perhaps spend the night there while you wait for your connecting flight.

Salem’s population in 2020 is less than half its 1920 population. This lack of convenient and reasonably-priced transportation alternatives is a significant reason for the decline in population in towns like Salem.
— Submitted April 12, 2021, by J. J. Prats of Powell, Ohio. 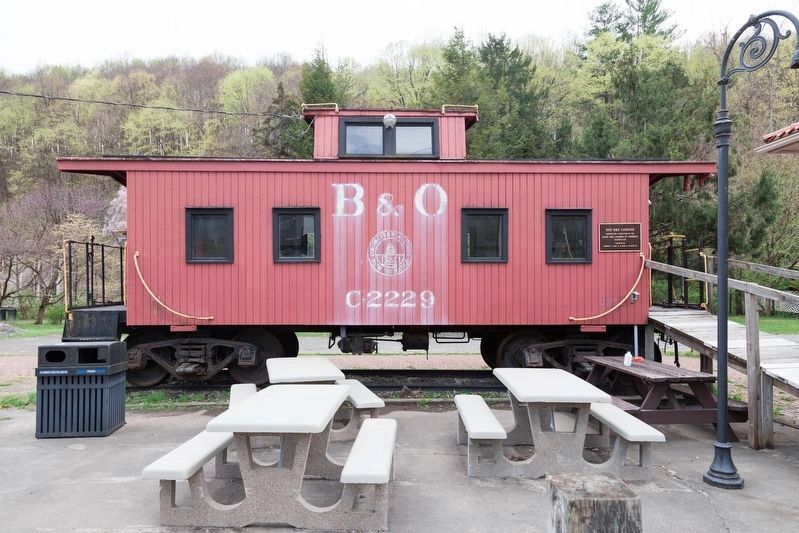