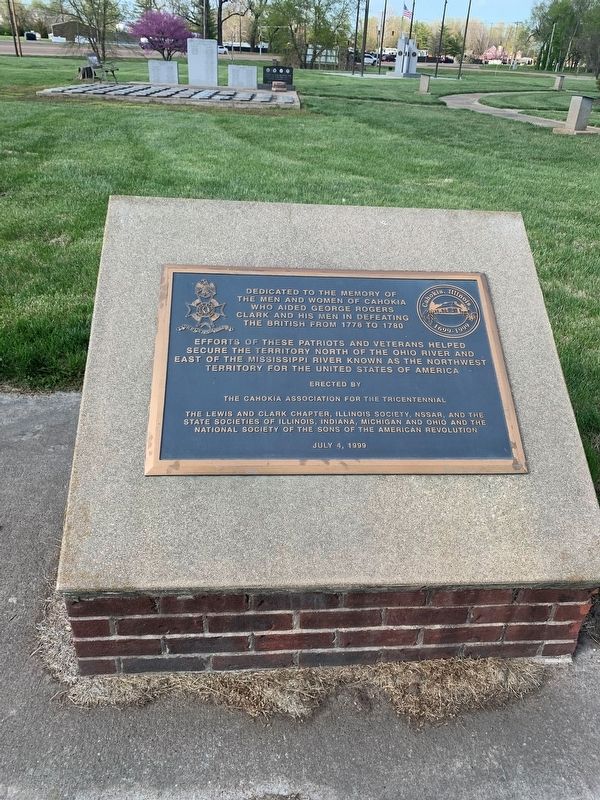 Dedicated to the memory of the men and women of Cahokia who aide George Rogers Clark and his men in defeating the British from 1778 to 1780. Efforts of these patriots and veterans helped secure the territory north of the Ohio River and east of the Mississippi River known as the Northwest Territory for the United States of America.

Erected 1999 by The Lewis and Clark Chapter, Illinois Society, National Society and the State Society of the Sons of the American Revolution.

Topics and series. This memorial is listed in these topic lists: Patriots & Patriotism • War, US Revolutionary. In addition, it is included in the Sons of the American Revolution series list. A significant historical year for this entry is 1778.

Location. 38° 34.264′ N, 90° 11.315′ W. Marker is in Cahokia, Illinois, in St. Clair County. Memorial is at the intersection of East 1st Street and Church Street, on the right when traveling east on East 1st Street. Touch for map. Marker is at or near this postal address: 105 Church St, East Saint Louis IL 62206, United States of America. Touch for directions.

Other nearby markers. At least 8 other markers are within walking distance of this marker. Parks Air College (a few steps from this marker); St. Louis Downtown Airport (Parks Airport)