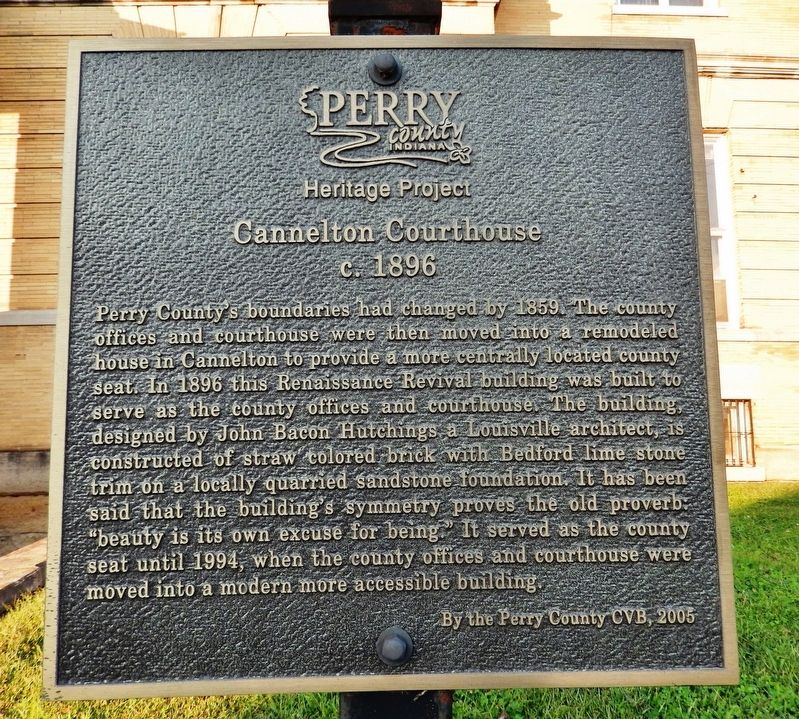 Photographed By Cosmos Mariner, September 16, 2017
1. Cannelton Courthouse Marker
Inscription.
Cannelton Courthouse. c. 1896. , Perry County’s boundaries had changed by 1859. The county offices and courthouse were then moved into a remodeled house in Cannelton to provide a more centrally located county seat. In 1896 this Renaissance Revival building was built to serve as the county offices and courthouse. The building, designed by John Bacon Hutchings a Louisville architect, is constructed of straw colored brick with Bedford lime stone trim on a locally quarried sandstone foundation. It has been said that the building’s symmetry proves the old proverb: “beauty is its own excuse for being.” It served as the county seat until 1994, when the county offices and courthouse were moved into a modern more accessible building. . This historical marker was erected in 2005 by Perry County CVB. It is in Cannelton in Perry County Indiana

Topics. This historical marker is listed in this topic list: Architecture. A significant historical year for this entry is 1896. 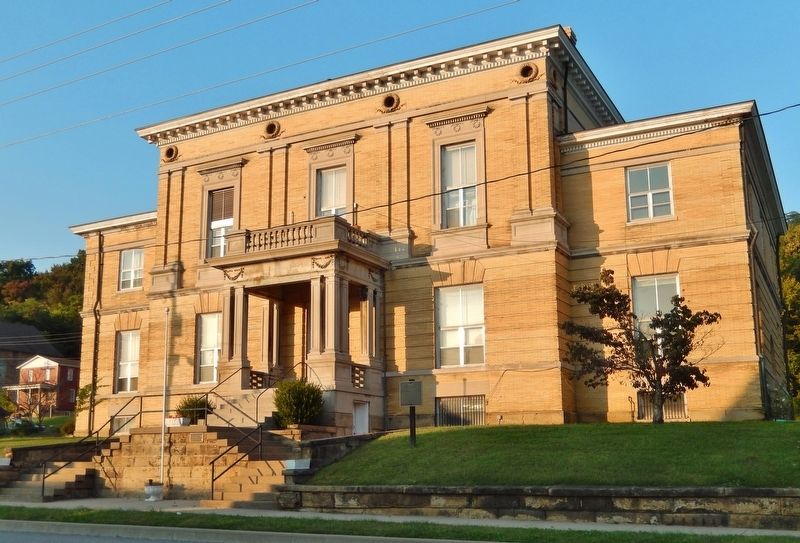 Click or scan to see
this page online
beside the sidewalk, directly in front of the subject building. Touch for map. Marker is at or near this postal address: 125 South 7th Street, Cannelton IN 47520, United States of America. Touch for directions.

Related markers. Click here for a list of markers that are related to this marker. Perry County Indiana Courthouse History

Also see . . .
1. Perry County Old Courthouse Museum. Wikimap entry:
The courthouse was built to replace the first courthouse at Cannelton, which was in a house remodeled for the hasty move of the county seat from Rome in 1859. The building cost $30,000 which was raised by Cannelton citizens and given to the county. (Submitted on April 25, 2021, by Cosmos Mariner of Cape Canaveral, Florida.) 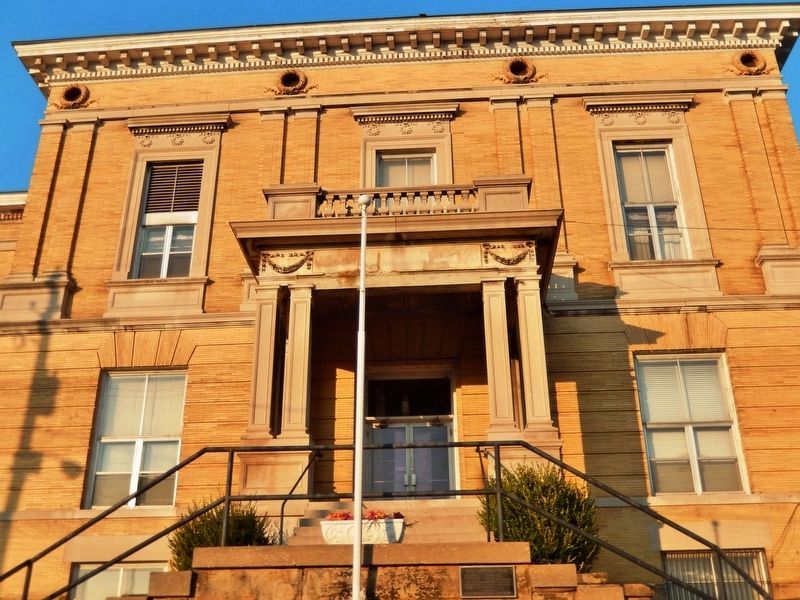 2. Perry County Court House, Cannelton, Indiana. Indiana Memory website entry:
Perry County has had four county seats. The first was at Troy, chosen in 1814. The second was Rome (originally named Washington and then Franklin) in 1819. Cannelton became the third in 1859. In 1994 a new county courthouse was opened in Tell City. (Submitted on April 25, 2021, by Cosmos Mariner of Cape Canaveral, Florida.) 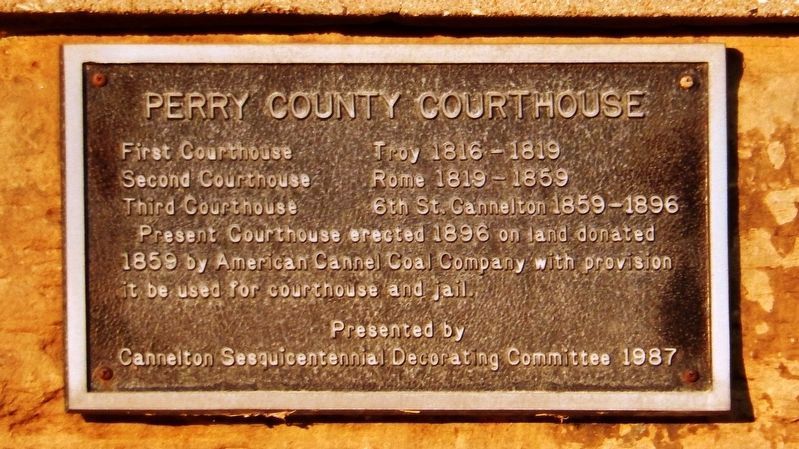 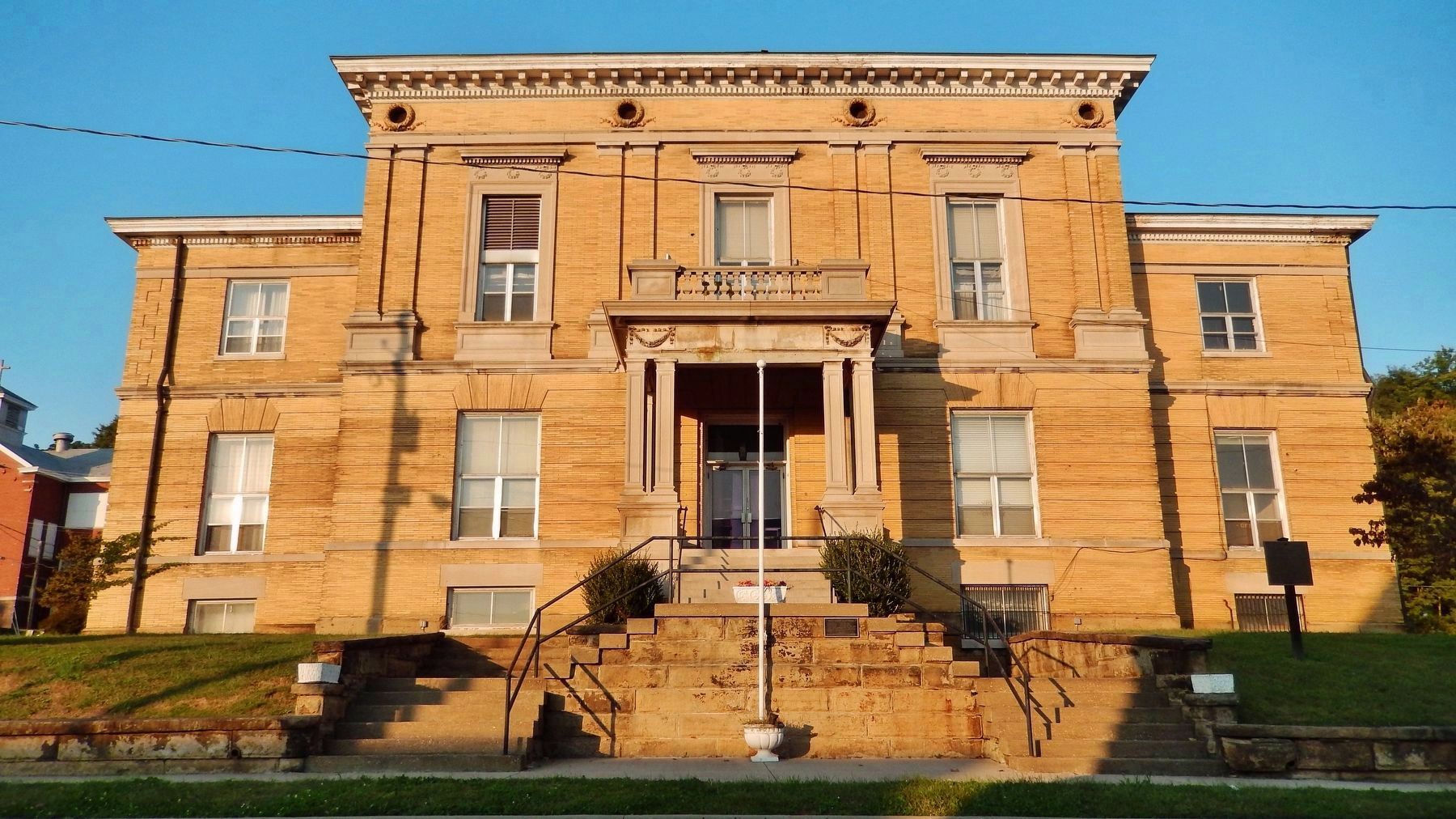