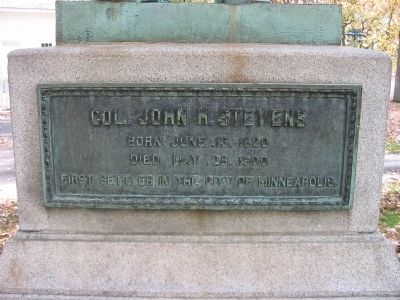 Topics. This historical marker is listed in this topic list: Settlements & Settlers. A significant historical month for this entry is May 1865. 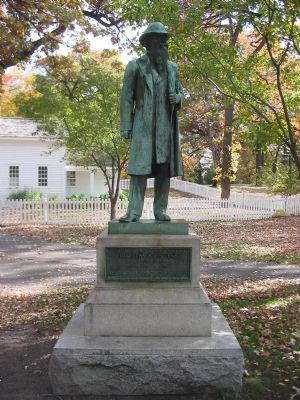 Click or scan to see
this page online
(about 700 feet away); Big Water / Stairway of Water (approx. 0.4 miles away). Touch for a list and map of all markers in Minneapolis.

Also see . . .
1. John H. Stevens. John Harrington Stevens was the first authorized resident on the west bank of the Mississippi River in what would become Minneapolis, Minnesota. (Submitted on March 21, 2009.)

2. Start Seeing Art. "This sculpture honors the first settler in the city of Minneapolis, Col. John H. Stevens. It was sculpted by Johannes Sophus Gelert between 1911 and 1912 based on drawings by Jakob Fjelde." (Submitted on March 21, 2009.)

Additional commentary.
1. Original Location 1912 - 1935
The statue was a gift of Mrs. Phillip B. Winston, daughter of Colonel Stevens. In 1935 the statue was moved from its original location in Stevens Triangle (intersection of Portland Avenue and Grant Street, Minneapolis) at the request of Colonol Stevens' heirs, when construction disrupted the site. Its current location is near the Stevens House in Minnehaha Park. Note To Editor only visible by Contributor and editor
— Submitted May 2, 2010, by James R. Kuntz of Warrenton, Missouri.