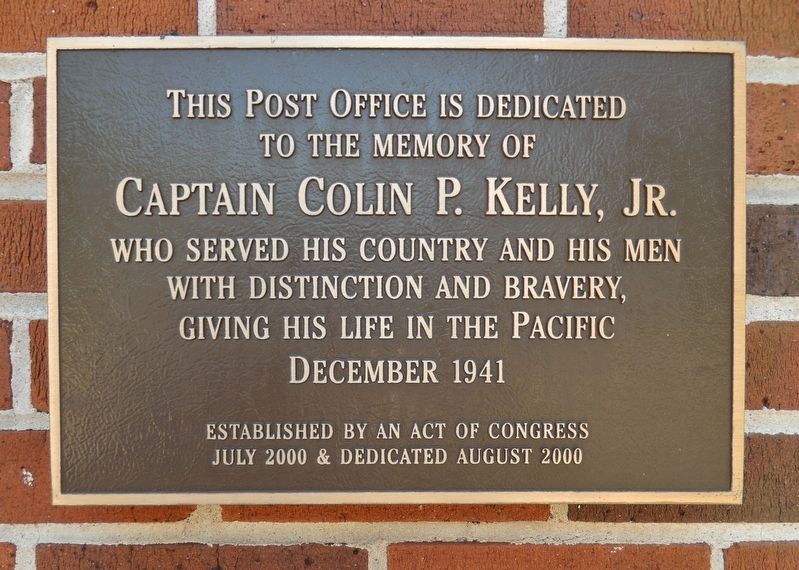 This Post Office is dedicated
to the memory of
Captain Colin P. Kelly, Jr.
who served his country and his men
with distinction and bravery,
giving his life in the Pacific
December 1941

Established by an Act of Congress
July 2000 & dedicated August 2000

Topics and series. This memorial is listed in these topic lists: Heroes • Patriots & Patriotism • War, World II. In addition, it is included in the Distinguished Service Cross/Navy Cross/Air Force Cross Recipients series list. A significant historical month for this entry is December 1941.

Location. 30° 28.104′ N, 83° 24.703′ W. Marker is in Madison, Florida, in Madison County. Memorial can be reached from Southwest Pinckney Street just east of Shelby Street, on the right when traveling east. Marker is mounted at eye-level, just to the right of the Post Office entrance. Touch for map. Marker is at or near this postal address: 197 Southwest Pinckney Street, Madison FL 32340, United States of America. Touch for directions.

Other nearby markers. At least 8 other markers are within walking distance of this marker. Captain Richard G. Bradford (about 300 feet away, measured in a direct line); 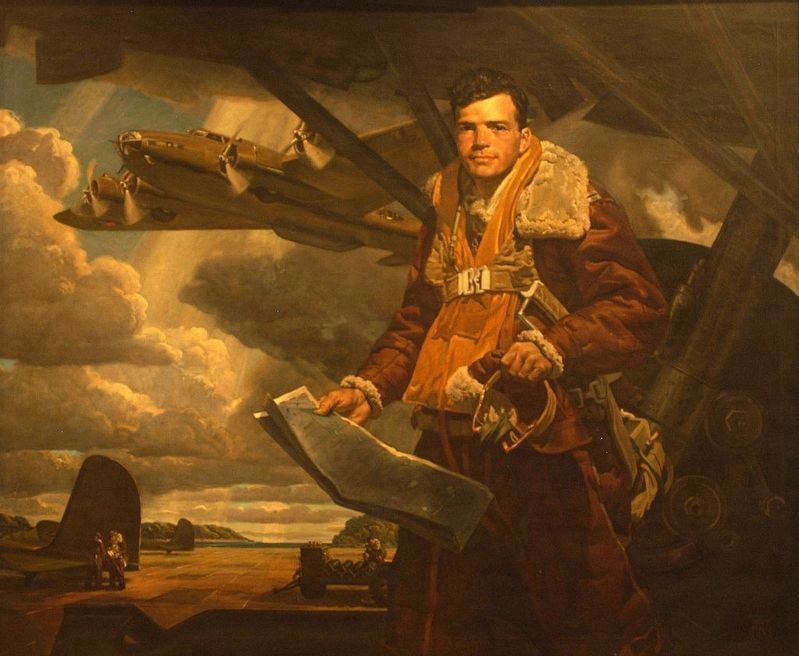 via SFAASC, unknown
2. Captain Colin Kelly, Jr. by Deane Keller hangs in the National Museum of the US Air Force

Regarding Captain Colin P. Kelly, Jr.. The "Four Freedoms Monument" and Colin Kelly Highway, both in Madison, Florida, are dedicated in his honor.

Related markers. Click here for a list of markers that are related to this marker. Monuments & memorials dedicated to Captain Colin P. Kelly, Jr.

Also see . . .
1. Colin Purdie Kelly Jr. Wikipedia entry:
Kelly was born in Madison, Florida in 1915 and graduated from high school there in 1932. He went on to West Point in 1933, graduated in the Class of 1937, and was assigned to a B-17 bomber group. As a World War II B-17 Flying Fortress pilot, he flew bombing runs against the Japanese navy in the first days after the Pearl Harbor attack. His was the first American 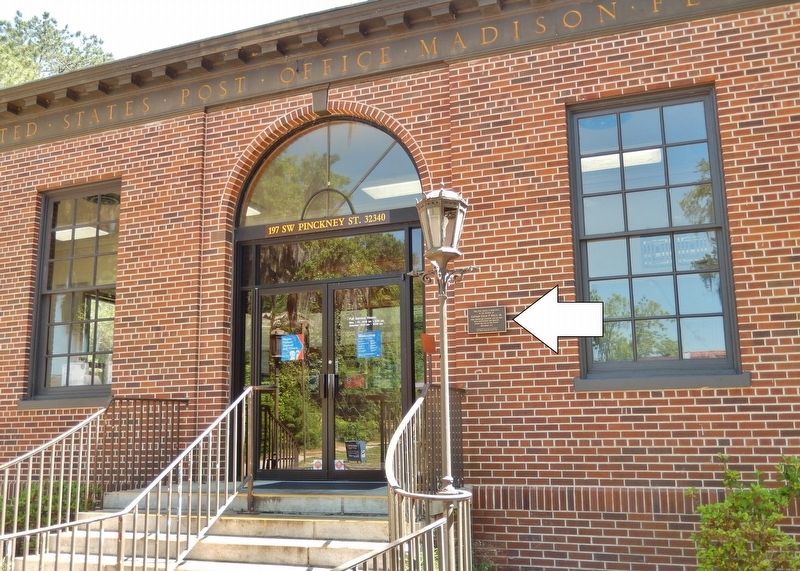 2. Captain Colin Kelly USAAC: America’s First World War Two Hero. Avgeekery website entry:
On December 10th 1941 five B-17s were sent to attack a Japanese convoy- the first bombardment mission of World War II. Later that day Captain Kelly, flying B-17C serial number 40-2045 alone and without fighter escort, attacked what his crew believed at the time was the battleship IJN Haruna but was likely the cruiser IJN Natori instead. During the return flight back to Clark, Kelly’s B-17 was savagely attacked by Japanese Zero fighters. Sergeant William Delahanty was killed during the first attack. A second attack set the bomber ablaze. Kelly ordered his crew to bail out of the stricken bomber and continued to try and bring the aircraft back to Clark Field. Not long after the crew bailed out the B-17C exploded, killing Kelly. The rest of Kelly’s crew survived the mission. (Submitted on May 5, 2021, by Cosmos Mariner of Cape Canaveral, Florida.) 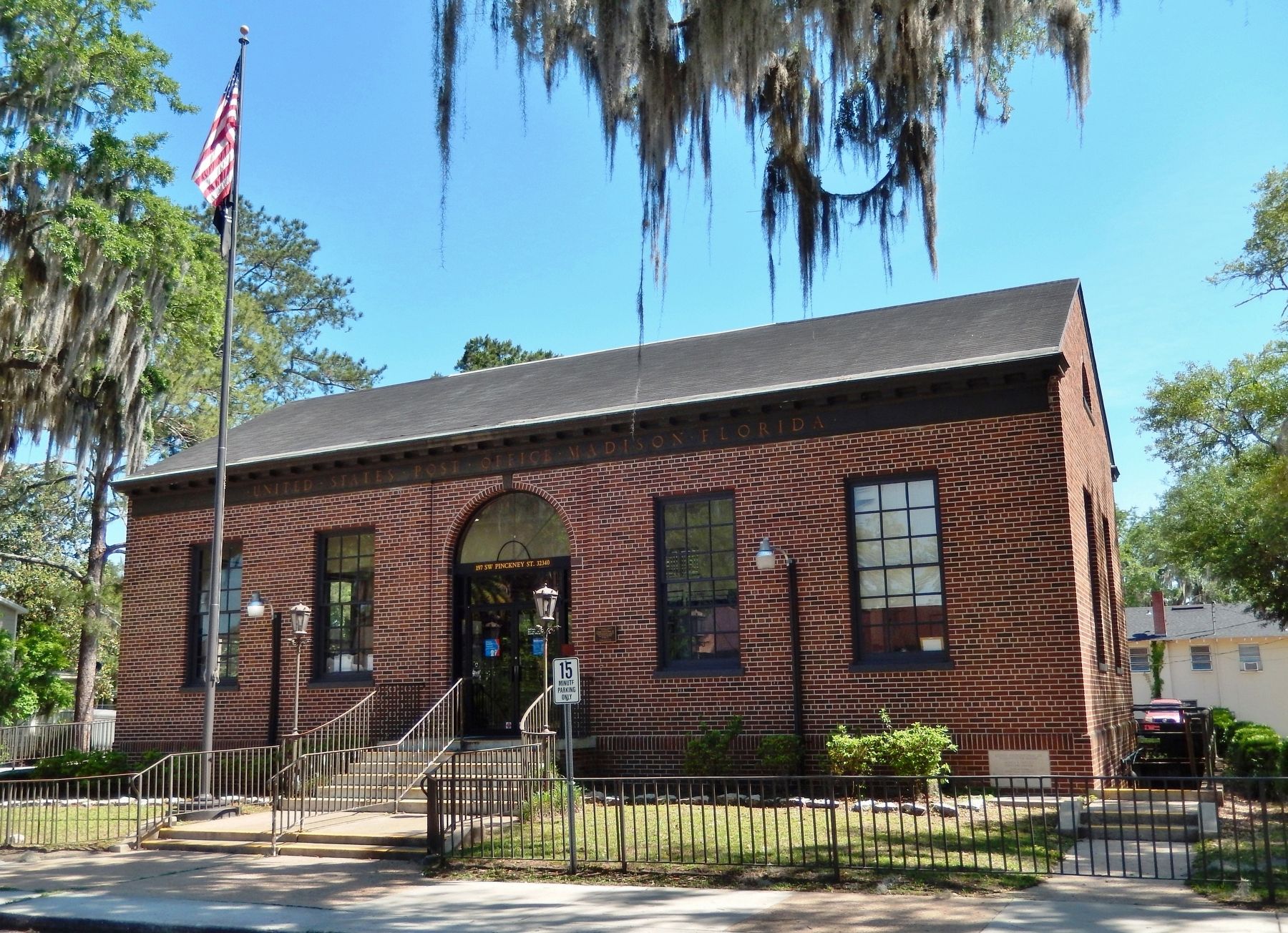