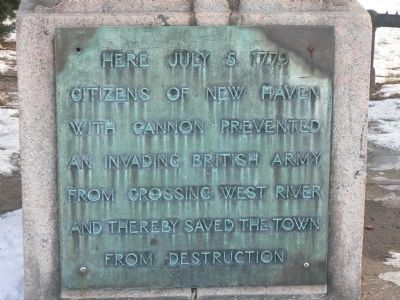 Topics. This historical marker and monument is listed in these topic lists: Patriots & Patriotism • War, US Revolutionary. A significant historical month for this entry is July 1939. 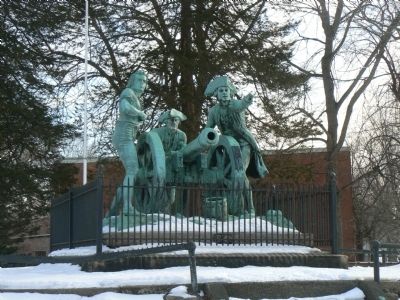 More about this monument. Sculptor James E. Kelly also created the statues of John Buford in Gettysburg, George Washington at New York’s Federal Hall, the Monmouth Battle Monument in New Jersey and others.

Regarding Defenders' Monument. The Defenders Monument commemorates the successful defense of the West River made by the citizens at the time of the British invasion of New Haven in 1779.

Additional commentary.
1. Defenders' Monument Association
A Defenders' Monument Association has been formed, under the auspices of the New Haven Colony Historical Society, for the purpose of erecting a suitable memorial where the cannon were placed to command West Bridge and the most important resistance was made. The Memorial group selected is typical of those who took part in the defense as regards age and social condition. One represents the citizen soldier, a merchant of local aristocracy in half Continental uniform; one, a well-to-do farmer, the other, a young student at Yale, and all in heroic size. The group is spirited and artistic. 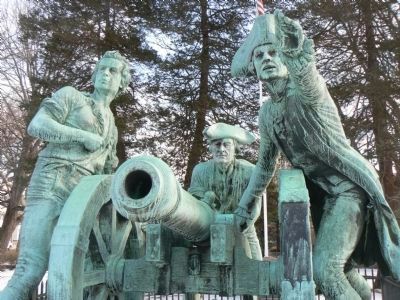 Photographed By Dave Pelland, January 26, 2009
3. Defenders' Monument
When completed it will be the most notable and impressive Revolutionary memorial erected in our State.

The actors on the scene we have contemplated have gone, but the spirit that animated them to battle for their liberties and their homes is the same that has inspired men to heroic deeds since the dawn of civilization. The members of this Society especially represent the heroes of that period of our country's history.

As England cherishes the fame of her Wellington and Waterloo, France her Napoleon and his conquests, as Germany reveres Frederick the Great, at rest at Sans Souci, and America her Washington, Bunker Hill and Yorktown, so along similar lines may we not most justly honor these men of lesser fame, who in their time, by their valor and their deeds as occasion offered, contributed their share to the grand result, American Liberty and American Prosperity. 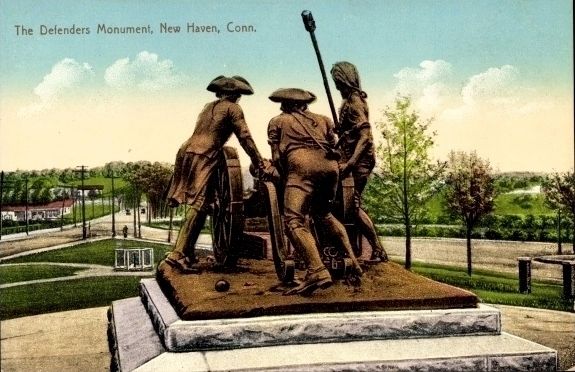