The Only Train Stop in Clyde 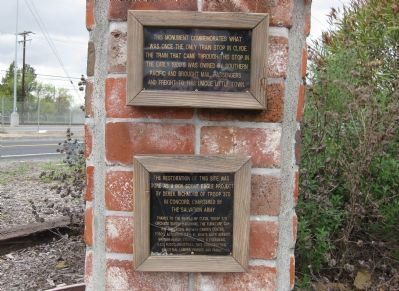 By Andrew Ruppenstein, March 15, 2009
1. The Only Train Stop in Clyde Marker
Inscription.
The Only Train Stop in Clyde. . This monument commemorates what was once the only train stop in Clyde. The train that came through this stop in the early 1900's was owned by Southern Pacific and brought mail, passengers, and freight to this unique little town. . . [Lower marker reads]: . The restoration of this site was done as a Boy Scout Eagle Project by Derek Richmond of Troop 370 in Concord, chartered by the Salvation Army. . . Thanks to the people of Clyde, Troop 370, Orchard Supply Hardware, The Furniture Guy, Bay Irrigation, Moraga Garden Center, Tosco, Automatic Rain, El Monte Auto Service, Wacker Family, Cousins Lock and Engraving, U.S.S. Posco Industries, Tib's Construction, Industrial Lumber, Friends and Family. . This historical marker is in Clyde in Contra Costa County California

This monument commemorates what was once the only train stop in Clyde. The train that came through this stop in the early 1900's was owned by Southern Pacific and brought mail, passengers, and freight to this unique little town.

[Lower marker reads]:
The restoration of this site was done as a Boy Scout Eagle Project by Derek Richmond of Troop 370 in Concord, chartered by the Salvation Army.

Location. 38° 1.369′ N, 122° 1.71′ W. Marker is in Clyde, California, in Contra Costa County. Marker is at the intersection of Sussex Street and Port Chicago Highway, on the right when traveling north on Sussex Street. Touch for map. Marker is in this post office area: Concord CA 94520, United States of America. Touch for directions. 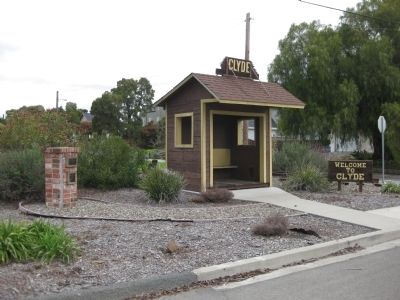 Regarding The Only Train Stop in Clyde. What makes Clyde unique, or at least unusual, is that it started as a planned company town, designed in 1917 by Bernard Maybeck for the Pacific Coast Shipbuilding Company. According to the US Census, in 2000 Clyde had a population of 694 persons.

Also see . . .  Trains of Concord and Cowell. 2005 article by Robert A. Campbell, Sr. “The Sacramento Northern Railway eliminated all passenger service in Fall 1940. The San Francisco-Pittsburg trains ran one more year, due to the opening of Acalanes High School in Lafayette. In 1940, high school seniors voted to continue riding the trains to school in Concord. The last run of the school train and all other San Francisco to Pittsburg passenger trains was made on June 27, 1941. Concord truly lost something when the Sacramento Northern terminated passenger service. The central Contra Costa County area certainly could have used the service during WWII. The last electric freight train from Oakland ran on February 28, 1957, and the last diesel train ran on December 12, 1973, thus ending the great railroad era in and around Concord.” (Submitted on April 5, 2009, by J. J. Prats of Powell, Ohio.)

Additional comments.
1. The San Francisco-Sacramento Railroad
The Oakland, Antioch & Eastern Railway, later named the San Francisco-Sacramento Railroad, was a wholly-owned subsidiary of the Southern Pacific that operated the electric trains that stopped at Clyde. Trains ran between Sacramento and Oakland, with connecting passenger ferry service to San Francisco. Three named trains ran through Clyde in 1925, The Meteor, The Comet and the Sacramento Valley Limited but only The Comet stopped at Clyde. The Comet had a parlor car for first class passengers with a buffet section that served food, snacks, and drinks to all passengers.

At least 10 other trains stopped at Clyde every day, in addition to The Comet, which in 1925 stopped at 10:28 AM on its way to Sacramento and at 4:29 PM on its return trip to Oakland. A passenger from Clyde could get to Sacramento in less than two hours, and to Oakland in an hour. Less than half an hour later after a ferry trip you were in San Francisco.

By 1944 the Sacramento-Oakland line was run by the Sacramento Northern Railroad and only freight service ran through Clyde. But the Bay Point & Clayton Railroad ran a very slow passenger train every day except Sunday on their 10½ mile track through Clyde between Port Chicago and Cowell. It left Cowell at 5 PM and got to Port Chicago half an hour later. At 6:05 PM it started its even slower return trip, arriving at Cowell at 6:40. (Port Chicago was bought by the U.S. Government and demolished in 1969.)
— Submitted April 5, 2009, by J. J. Prats of Powell, Ohio.
Credits. This page was last revised on June 16, 2016. It was originally submitted on March 26, 2009, by Andrew Ruppenstein of Sacramento, California. This page has been viewed 1,545 times since then and 34 times this year. Photos:   1, 2. submitted on March 26, 2009, by Andrew Ruppenstein of Sacramento, California. • Kevin W. was the editor who published this page.
Share This Page.