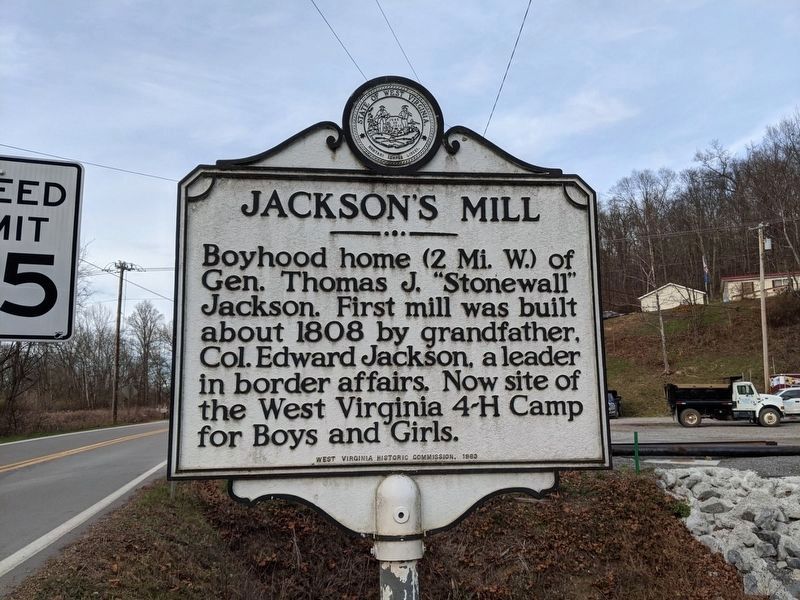 Photographed By Mike Wintermantel
1. Jackson’s Mill side of marker
Inscription.
Jackson’s Mill, also, Jackson Graves. . , Jackson’s Mill , Boyhood home (2 Mi. W.) of Gen. Thomas J. “Stonewall” Jackson. First mill was built about 1808 by grandfather, Col. Edward Jackson, a leader in border affairs. Now site of the West Virginia 4-H Camp for Boys and Girls. , Jackson Graves , Two miles west in the old Jackson Cemetery are buried Colonel Edward Jackson and Elizabeth Jackson, the grandparents of General Stonewall Jackson with whom he lived until he became a Cadet at the West Point Military Academy. . This historical marker was erected in 1963 by West Virginia Historic Commission. It is Near Weston in Lewis County West Virginia

Jackson Graves
Two miles west in the old Jackson Cemetery are buried Colonel Edward Jackson and Elizabeth Jackson, the grandparents of General Stonewall Jackson with whom he lived until he became a Cadet at the West Point Military Academy.

Topics. This historical marker is listed in this topic list: Notable Places. A significant historical year for this entry is 1808.

Other nearby markers. At least 8 other markers are within 2 miles of this marker, measured as the crow flies. Graves of Heroes (approx. 0.7 miles away); Jackson’s Mill (approx. 1.3 miles 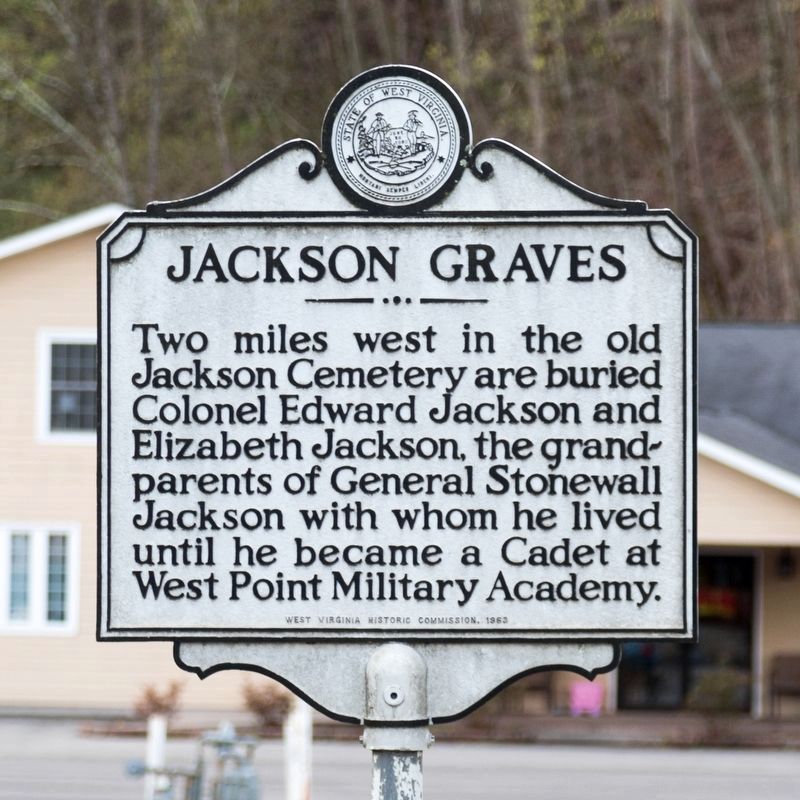 More about this marker. The 1937 issue of West Virginia Historic and Scenic Highway Markers, compiled by Ross S. Johnston and Isaac McNeel and published by the State Road Commission of West Virginia, shows the following inscription for this marker (then a one-sided marker). Underlined are the differences compared to the current marker.

Site of boyhood home of General Thomas J. “Stonewall” Jackson (4 Mi. W.) The first mill was built about 1808 by his grandfather, Colonel Edward Jackson, who became a leader in border affairs. It is now the site of the West Virginia 4-H Camp for Boys and Girls.

It places the marker at “Secondary 1 west of Jackson’s Mill" which would place it in Jane Lew, at the corner of Main Street (US 19) and High Street, which is 4.2 road miles east of Jackson's Mill.

Additional commentary.
1. His home and the graves are really 2.7, 2.8 miles north
The “2 Mi. W.” and “two miles west” on this sign do not make sense. Jackson’s Mill is 2.7 road miles mostly north (the road leans a bit to the west as it heads north). The graves are another tenth of a mile further. The marker is on West Virginia County Route 12, and even-numbered state and county roads are north-south roads. And finally, there are no major intersections approximately 2 miles east of Jackson’s Mill where this sign could have originally been planted.

Take a look at the text, reproduced above, of the original 1930s marker. That marker was located about 4 miles east of Jackson’s Mill. A 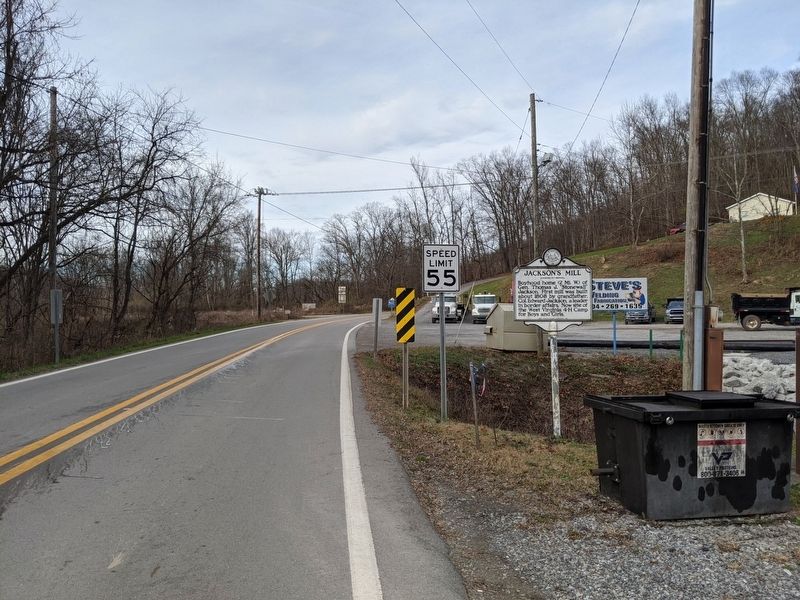 Photographed By Mike Wintermantel
3. Jackson's Mill Marker
good guess would be that “W” is a typo from when the marker was recast in 1963. When the old text was marked up, someone marked through the “4” to change it to “2” miles, but neglected to cross out the “W” and replace it with “N”.

And then, on the reverse side, the west versus north error is repeated. If you accept the previous guess, then it can be extended to say that the writers of second side text took their cue from the incorrectly marked up first side.
— Submitted May 24, 2021, by J. J. Prats of Powell, Ohio. 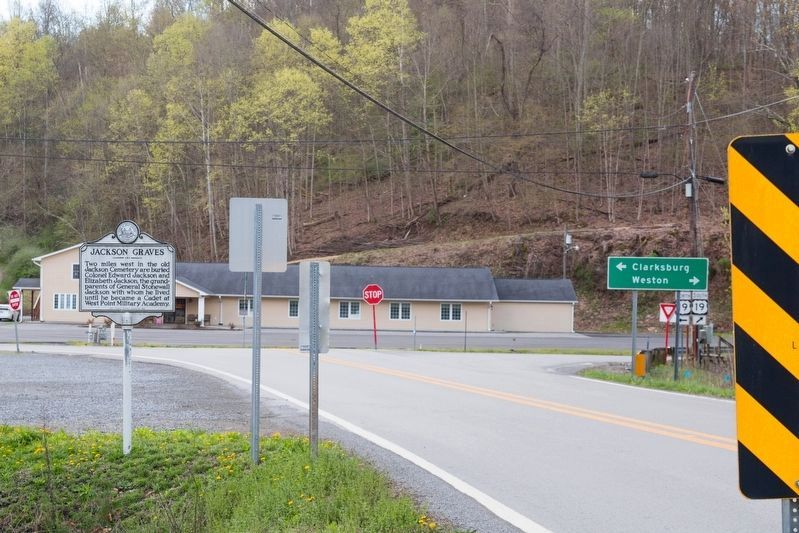 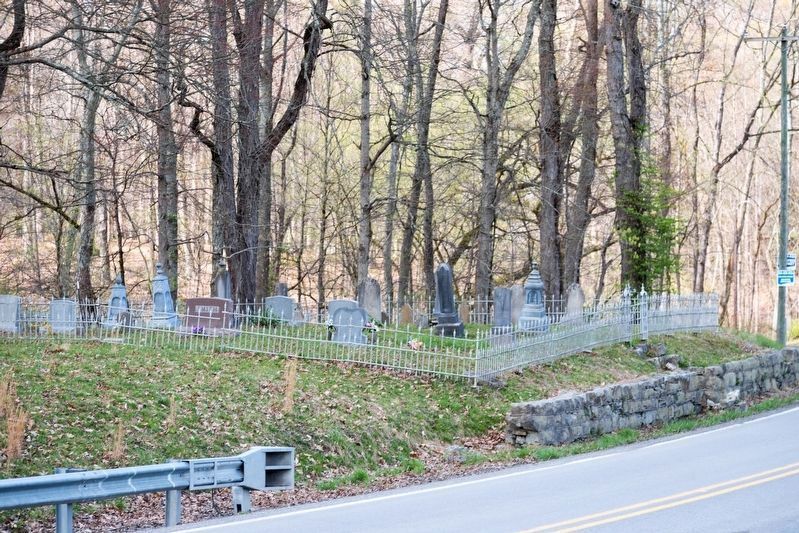 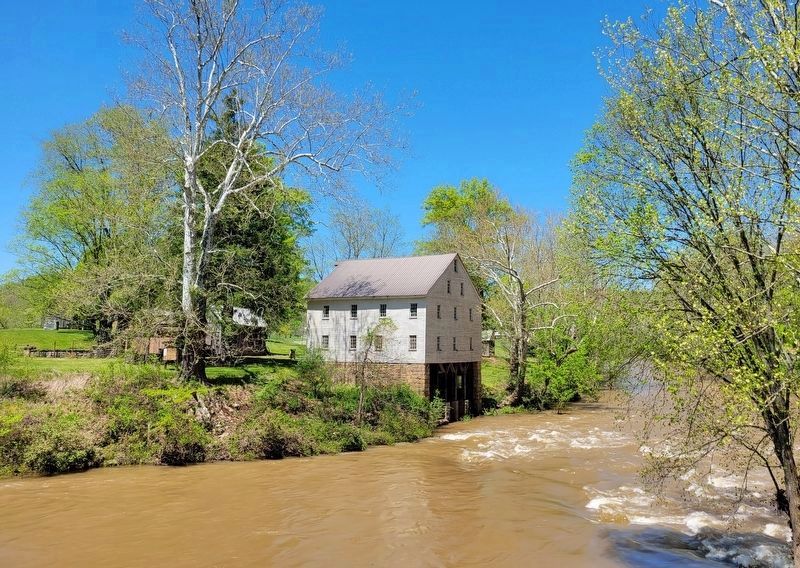