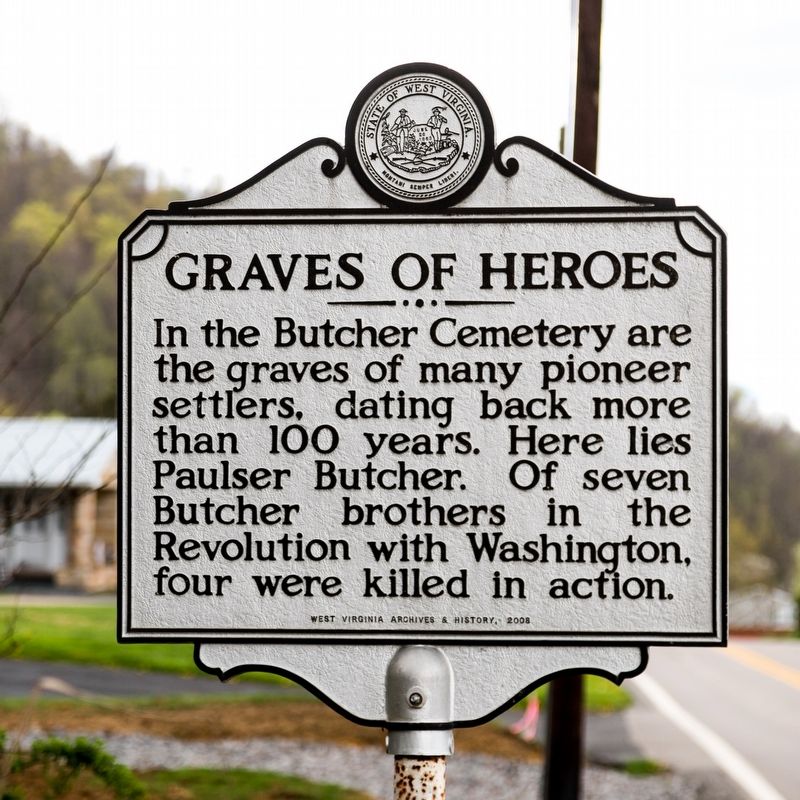 By J. J. Prats, April 11, 2021
1. Graves of Heroes Marker
Inscription.
Graves of Heroes. . In the Butcher Cemetery are the graves of many pioneer settlers, dating back more than 100 years. Here lies Paulser Butcher. Of seven Butcher brothers in the Revolution with Washington, four were killed in action. . This historical marker was erected in 2008 by West Virginia Archives and History. It is in Turnertown in Lewis County West Virginia

In the Butcher Cemetery are the graves of many pioneer settlers, dating back more than 100 years. Here lies Paulser Butcher. Of seven Butcher brothers in the Revolution with Washington, four were killed in action.

Topics. This historical marker is listed in these topic lists: Settlements & Settlers • War, US Revolutionary. 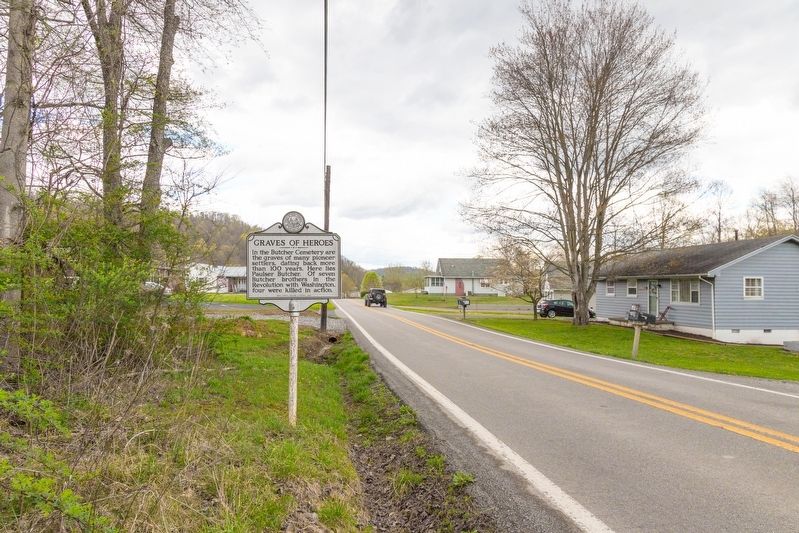 More about this marker. The original of this marker was erected in the 1930s and appears in the 1937 issue of West Virginia Historic and Scenic Highway Markers, compiled by Ross S. Johnston and Isaac McNeel and published by the State Road Commission of West Virginia. That previous marker had the same title and text as this one, but it was shown as being located on "U.S. 19, near Jackson’s Mill.” The nearest U.S. 19 intersection to the cemetery would be in Weston, about 3 miles south of the present location.

Regarding Graves of Heroes. The cemetery is a few hundred feet east of this marker, on the banks of the West Fork River. You may need permission from one of the homeowners to cross their property to reach the cemetery on foot from here, but if you continue driving north to Brookview Drive (CR 1/20) and turn right, the drive jogs right in two blocks and the cemetery is at the end of the drive.

To the Honourable the General Assembly of Virginia.

Your petitioner Humbly sheweth to your Honourable Bodies that in the year her husband Paulser Butcher was a private soldier in a Company of Rangers or Indian Spies under the Command of Captain James Booth that in consequence of Captain Booths untimely Death [killed by Indians, 16 Jun 1778] her Husband Paulser Butcher did not in his lifetime Ever Receive his wages for said cervices, nor has your petitioner Ever Received any kind of compensation for said Service of her Late Husband,

Your petitioner was Ignorant of the mode by which to obtain Compensation untill very lately she has heard that your Honourable Body passed a Law at the last Session making provision for David Sleeth [David W. Sleeth, pension application S6111] and Others embracing the Widdow of Thomas Cunningham [W4166].

Your petitioner knowing that her Late Husband did serve his Country in that Expedition, for which Sleeth & others have Received Remuneration; as faithfully as any soldier of his day. Which Service our petitioner believes was thirteen months, your petitioner Being now Very old and infirm, and dependant upon her Children for maintenance, humbly pray your Honourable Body that a Law may pass allowing your Humble petitioner the amount which has been allowd other persons for the like service And your petitioner will ever Pray