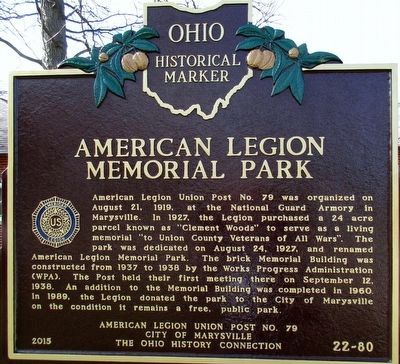 American Legion Memorial Park
American Legion Union Post No. 79 was organized on August 21, 1919, at the National Guard Armory in Marysville. In 1927, the Legion purchased a 24 acre parcel known as "Clement Woods" to serve as a living memorial "to Union County Veterans of All Wars". The park was dedicated on August 24, 1927, and renamed American Legion Memorial Park. The brick Memorial Building was constructed from 1937 to 1938 by the Works Progress Administration (WPA). The Post held their first meeting there on September 12, 1938. An addition to the Memorial Building was completed in 1960. In 1989, the Legion donated the park to the City of Marysville on the condition it remains a free, public park. (American Legion logo)
Marysville Municipal Swimming Pool
The Marysville Municipal Swimming Pool was opened on May 31, 1936 when 5,000 people attended the grand opening. The project began in 1934 when the American Legion deeded a 5 acre parcel of Legion Park to the Village of Marysville for a pool. Local fundraising and support from the Federal Emergency Relief 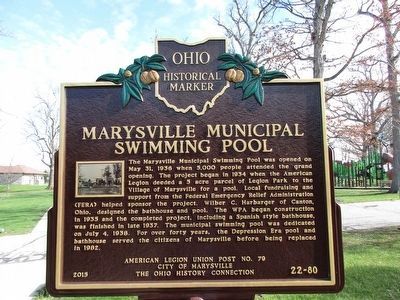 Click or scan to see
this page online
Administration (FERA) helped sponsor the project. Wilber C. Harbarger of Canton, Ohio, designed the bathhouse and pool. The WPA began construction in 1935 and the completed project, including a Spanish style bathhouse, was finished in late 1937. The municipal swimming pool was dedicated on July 4, 1938. For over forty years, the Depression Era pool and bathhouse served the citizens of Marysville before being replaced in 1982.

Topics and series. This memorial is listed in these topic lists: Architecture • Charity & Public Work • War, World I. In addition, it is included in the Ohio Historical Society / The Ohio History Connection series list.

Location. 40° 14.404′ N, 83° 23.001′ W. Marker is in Marysville, Ohio, in Union County. Memorial is on Park Road, on the left when traveling west. Marker is in front of the American Legion Memorial Building (subject of another HMdb page). Touch for map. Marker is at or near this postal address: 500 Park Road, Marysville OH 43040, United States of America. Touch for directions.

Other nearby markers. At least 8 other markers are within walking distance of this marker. American Legion Memorial Park (about 300 feet away, measured in a direct line); Veterans of Foreign Wars War Memorial 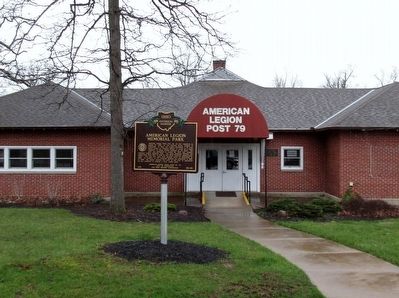 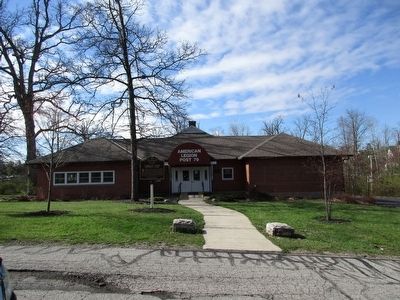 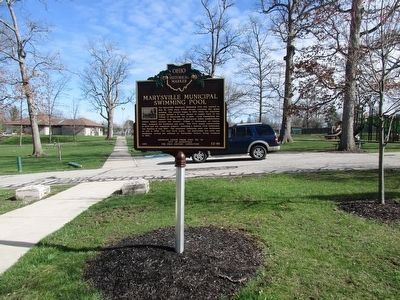 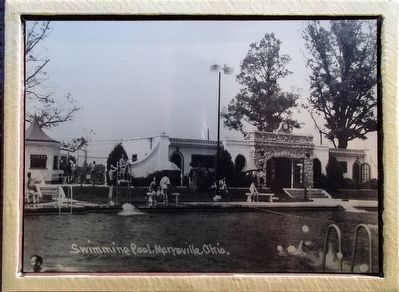