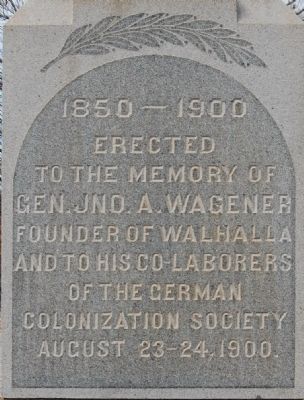 Photographed By Brian Scott, November 28, 2008
1. John A. Wagener Monument - East Side
Inscription.
John A. Wagener Monument. [East Side]:
Erected to the Memory of Gen. Jno. A. Wagener Founder of Walhalla and to His Co-laborers of the German Colonization Society August 23-24, 1900.. . This monument was erected in 1900. It is in Walhalla in Oconee County South Carolina

[East Side]:
Erected
to the Memory of
Gen. Jno. A. Wagener
Founder of Walhalla
and to His Co-laborers
of the German
Colonization Society
August 23-24, 1900.

Topics. This historical marker and monument is listed in this topic list: Settlements & Settlers. A significant historical year for this entry is 1900.

Location. 34° 45.933′ N, 83° 4.147′ W. Marker is in Walhalla, South Carolina, in Oconee County. Marker is on West Main Street, on the left when traveling west. Monument is located west of the intersection of Main and Church Streets. Touch for map. Marker is in this post office area: Walhalla SC 29691, United States of America. Touch for directions. 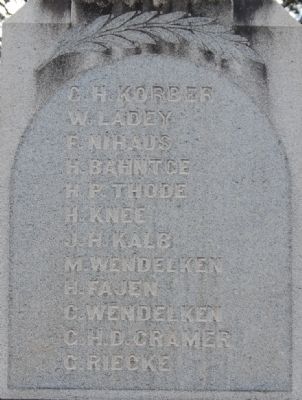 Additional commentary.
1. John A. Wagener Monument Rededication, July 27, 2000
Good morning ladies and gentlemen; and a special welcome to descendants of General Wagener and members of the German Colonization Society.

As Mayor of Walhalla, I deem it an honor and a privilege to be able to participate in the rededication of the monument to our founding fathers.

I could talk for hours about the accomplishments of General Wagener and the other Society members. One example is the landmark church behind you that was built by German master builder John Kaufmann, a later German settler.

The fabulous Biemann Hotel that is sadly gone but not forgotten. An opera house that could seat hundreds of people for a performance. Places like Brewery Park and the acres of vineyards that made Walhalla uniquely German.

As we begin the celebration of our 150th birthday, I would like to share with you an abbreviated history of a man who was possessed of extraordinary abilities in many fields and was responsible

Raised in a business-merchant family, young Johann and his brother Jurgen came to America in 1831. Eventually locating in Charleston in 1833, he became involved in real estate and learned the legal system of his adopted homeland.

Becoming an American citizen in 1839, he soon became a recognized leader in the German community.

Some of his accomplishments are as follows:

2. In 1840, his efforts led to the organization of St. Matthew's Lutheran in Charleston (mother church to our own St. John's).

3. Wagener formed a Teutonic Union in 1843 for the encouragement of culture, literature, and good character.

4. The bi-weekly paper "Der Tutone" was started in 1844. (This allowed German immigrants to read the news.)

5. Wagener was a prominent member of numerous lodges in Charleston and in 1857 was "Worshipful Master" of three lodges simultaneously.

6. He was involved in the German Athletic Association and the first German American Theater in Charleston.

7. Brothers John and Jurgen were important figures in the German Military Organization prior to and during the Civil War.

8. After the Ordinance of Secession was signed on December 20, 1860, Wagener's 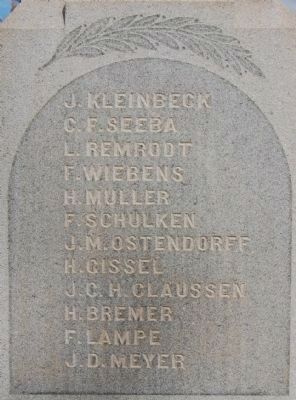 9. By July, 1861 Wagener was a Lieutenant Colonel in the Confederate Army. His troops built Fort Walker on Hilton Head, after which he was made Brigadier General and Commandant of Charleston. He held this post throughout the war.

10. After the war ended, General Wagener served as a member of the State House of Representatives in Columbia.

11. Beginning in 1871, he served for two years as Mayor of Charleston.

Looking back on this illustrious career, it is easy to see why the people of Charleston look to John Wagener as one of their foremost leaders when South Carolina had some of its most troubled times. The General did more in one year than most men do in a lifetime.

However, for all of his accomplishments, the one that we in Walhalla hold most dear, is his primary role in the establishment of our town. As early as 1844, there were discussions that a German settlement should be established in Upstate South Carolina.

Led by Jacob Schroder, several German friends called upon John Wagener for advice. Almost immediately, Wagener helped organize and develop the German Colonization Society that ultimately resulted in the founding of Walhalla in 1850.

Named "Valhalla- Garden of the Gods" in Norse mythology, land for 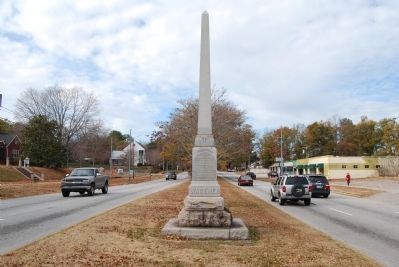 Photographed By Brian Scott, November 28, 2008
5. John A. Wagener Monument Looking West Along Main Street
the town and surrounding farms was purchased from local businessman Joseph Grisham for about $1.50 an acre. At this intersection where we are today is where the surveying of Walhalla began with lots being laid off on either side of what is now Main Street.

Although he continued to reside in Charleston, General Wagener made numerous trips to an ever-growing German settlement that would eventually include Newberry College.

It was here, in Walhalla, on August 27,1876 that John Wagener, in the presence of some of his closest friends, including Diedrich and Catherine Biemann, passed on to his reward.

The tolling of the church bell informed the German Community that their founder was gone. Wagener requested he be buried in his beloved Walhalla and his wish was granted.

Sentiment was strong in Charleston, however, to remove his remains back to that city. Walhallans acceded to the request and in March of 1877 a special railroad car conveyed the General back to the port city for a funeral and burial attended by over 6,000 people. There is a monument in St. John's Cemetery marking his original resting-place.

When Walhalla celebrated its Semi-Centennial in 1900, the highlight event was the unveiling of an obelisk monument to John A. Wagener and the other 36 charter Colonization Members. One hundred years later, we rededicate this memorial to a 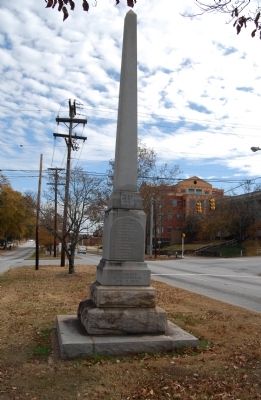 Speaking for our City Council, the Chamber of Commerce, and for our town's citizens, I want to thank the descendants of General Wagener and other Society members for attending our celebration today. We are all fortunate to live in such a wonderful and caring community. Danke Schon.

Mayor William R. Whitmire, (Bill)
— Submitted December 6, 2008, by Brian Scott of Anderson, South Carolina.
2. "Song of Spring" by Gen. John A. Wagener (1864)
Spring has come! Spring has come!
The brightening earth, the sparkling dew,
The bursting buds, the sky of blue,
The mocker's carol, in tree and hedge,
Proclaim anew Jehovah's pledge --
"So long as man shall earth retain,
The seasons gone shall come again."

Spring has come! Spring has come!
We have her here, in the balmy air,
In the blossoms that burgeon without a care;
The violet bounds from her lowly bed.
And the jasmine flaunts with a lofty head;
All nature, in her baptismal dress,
In abroad -- to win, to soothe, and bless.