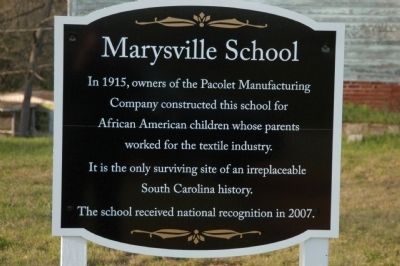 Photographed By Michael Sean Nix, April 4, 2009
1. Marysville School Marker
Inscription.
Marysville School. .
In 1915, owners of the Pacolet Manufacturing Company constructed this school for African American children whose parents worked for the textile industry. It is the only surviving site of an irreplaceable South Carolina history. The school received national recognition in 2007.. . This historical marker is Near Pacolet in Spartanburg County South Carolina

In 1915, owners of the Pacolet Manufacturing
Company constructed this school for
African American children whose parents
worked for the textile industry.
It is the only surviving site of an irreplaceable
South Carolina history.
The school received national recognition in 2007.

Topics. This historical marker is listed in these topic lists: African Americans • Education. A significant historical year for this entry is 1915.

Other nearby markers. At least 10 other markers are within 7 miles of this marker, measured as the crow flies. Pacolet River Heritage Preserve (approx. 1.6 miles away); Goucher Baptist Church (approx. 4.7 miles away); Welcome to Glendale Shoals (approx. 4.9 miles away); Camp Croft (approx. 5.2 miles away); Nuckolls-Jefferies House 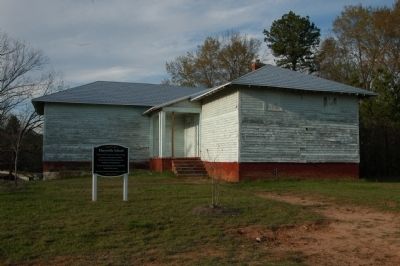 Regarding Marysville School. The school house is in the process of slowly being restored. A new tin roof was added not long ago. School is on National Register of Historic Places.

Additional commentary.
1.
Marysville School was added to the National Register of Historic Places in 2006 (Building #06001231).

"Marysville School would become obsolete by 1954 due to the decision of the Supreme Court in the landmark Brown vs. 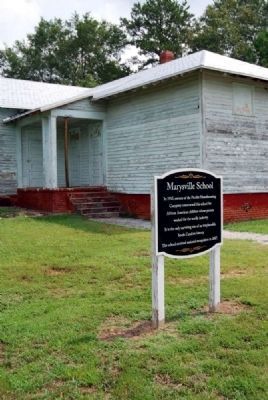 Photographed By Brian Scott, July 11, 2011
3. Marysville School and Marker
Board of Education, which decided that segregating schools was illegal under the constitution."
— Submitted March 3, 2010, by Mike Stroud of Bluffton, South Carolina.
2. Marysville School
Description
The Marysville School is a one and a half story, three room school building located at the corner of Knuckles St. and Sunny Acres Rd. in the Town of Pacolet, on the eastern side of Spartanburg County, South Carolina. Marysville School resembles a Gabled Ell structure, with its “L” shape, but this is due to the addition of a third room sometime prior to 1950, and not, it seems, as a specific design effort.

The front of the building faces south towards Sunny Acres Rd. From this angle, the Gabled Ell appearance is seen, with a room built at a right angle to the rest of the structure. This room was added to the building some time between 1935 and 1950 to accommodate the growing population of students to the school. There are a total of three entrances to the building 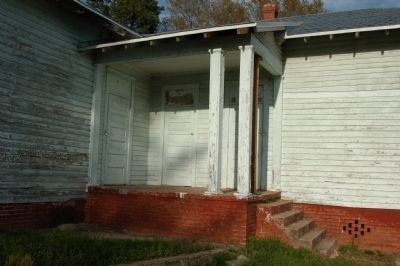 Photographed By Michael Sean Nix, April 4, 2009
4. Marysville School
on the front façade. One entrance is located on the original portion of the structure, facing south towards Sunny Acres Rd. Two other doors are located on the addition and face west towards Knuckles St. The middle door opens into a small hallway between the two classrooms in the original portion of the building, with the two surrounding doors opening directly into classrooms. Two small, square windows are located on the addition on the front façade, both facing towards Sunny Acres Rd. These windows appear to have been one-over-one windows, but they have been boarded and this can not be verified.

The doors are accessed by a small set of brick stairs that lead up to a covered porch that is supported by three Doric columns on the front-left corner of the porch. Located next to this porch on the ground can be seen the semi-circular, block outlined remains of a small landscape area. 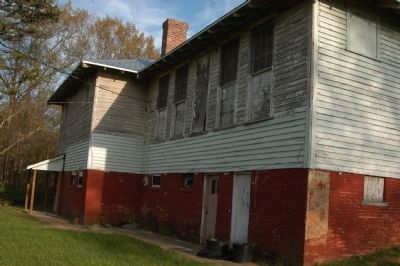 Photographed By Michael Sean Nix, April 4, 2009
5. Marysville School
the rear of the structure both levels of the school become clear. The lower level contains a total of three entrances. One small door is located on the lower left of the rear façade, which is covered by a small overhang. Photos taken of this portion of the school in 1935[1] do not show a door in this location at that time, so it must have been added some time after 1935. Two small, rectangular windows are located to the right of this door, also added after 1935, and two one-over-one windows are located above this door on the upper level. The right side of the rear façade contains two entrances on the lower level. Both of these doors were also added after 1935. There was a door present prior to then, but it was located on the left side of this portion of the façade. That door has been bricked-in, and a small rectangular window was put in its place. The door now present on the far right appears to have been the location of a window originally, but it was converted into a door post 1935. A total of two small, rectangular windows are located to the left of the current doors on the lower level. There are five double-hung sash windows on the upper level of this portion of the rear façade.

The left façade of the school contains one small, rectangular window on the lower level that has been boarded, with two additional windows, also now covered, located on the upper 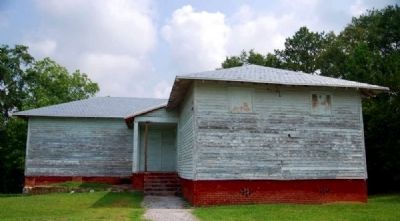 The main level of the interior, accessed only by the entrances located on the front of the building, contains three rooms separated by a small hallway. All of these rooms are square in design, and all are roughly the same size. These rooms were used as the classrooms. The two classrooms that are located adjacent to one another are the original rooms, built in 1915. They were separated by folding doors, which could slide open or closed as needed. These sliding doors are still in place. The third room is located in the addition, and was built sometime between 1935 and 1950. This room is separated from the other two classrooms by a small hallway. All of these rooms still contain their original slate boards, as well as their original floors and walls.

As mentioned above, there are three other entrances located on the lower level of the rear portion of the school. The small door on the left side of the rear lower level leads into a small kitchen area, while the other two doors on the right side open into storage spaces.

Originally built in 1915, the school appears to have undergone few changes between then and 1935, when Marysville School was inventoried and described in a state school building survey performed by the Works Progress Administration. At some time after this, the growing student population forced a need to build the additional 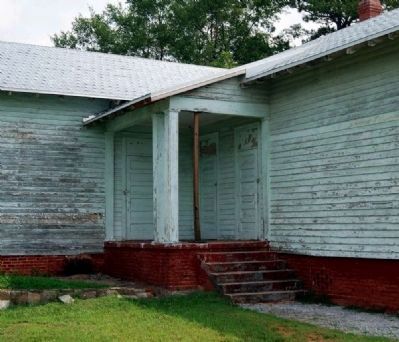 Photographed By Brian Scott, July 11, 2011
7. Marysville School Entrance
room onto the original structure, and it seems likely that the doors and windows added on the rear portion of the building would have been added at the same time. Although the exact date these changes were made is not known, a local resident, and one-time student of Marysville, Betty Littlejohn, states that they were there when she went to school, which was prior to 1950.[2]

Significance
The Marysville School is eligible for the National Register of Historic Places under criterion A, for its association with the history of segregated society in upstate South Carolina. The school was built by the Pacolet Manufacturing Company in 1915 to educate the children of the black families that worked in the mills in Pacolet, and served in that function until it was closed in 1954.

By the early 20th century, the mills owned by the Pacolet Manufacturing Co. at a place on the Pacolet River on the eastern side of Spartanburg County known then as Trough, and now as Pacolet, were thriving. The area around the mills would grow with the mills, as homes provided for the mill workers would be built by the Manufacturing Co. One such area built by the Manufacturing Co. would become known as Marysville. In many ways, it was similar to the other homes of the mill village. Described as, “...four rows of houses…and you could see from one end to the ‘nother.”[3] 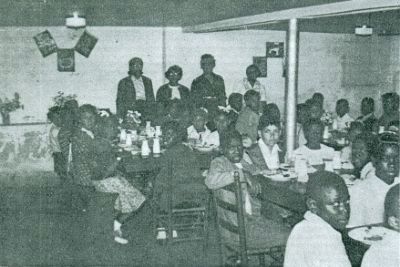 Photographed By Brian Scott, 1949
8. Marysville Students Receiving Lunch
Unlike the other homes, however, these homes were built specifically for the colored mill workers and their families.

Originally called Gilliam Town, the name of this village was changed to Marysville, after Mary Brown Knuckles, the lady that would bring Marysville School to the residents of that community.[4] The community was built by the Pacolet Manufacturing Co. in order to keep the colored workers and their families separate from the white workers. It was not just the houses that were segregated, everything in the village at that time, as was common in the south during the first half of the 20th century, was segregated. Not only did the colored mill workers have their own community, they were not allowed to have the same jobs in the mills that white workers did. In fact, they were not even allowed to have jobs inside the mills. The colored workers were outside workers, taking care of the landscape, cleaning bathrooms, etc.[5] The same was also the case for educating the children of the colored workers, as well. Confronted with the dilemma of "separate but equal," and, apparently, with the help of Mary Brown Knuckles, the Pacolet Manufacturing Co. built a school for the residents of Marysville in 1915.

More than 75 years after attending Marysville School, Ola Smith would recount what it was like: “At the time,[1925] when I started, it was just two rooms…they had more than one grade in the room…it was up to fourth or fifth grade in the first room, and the other side was bigger children…They had folding doors in between…[and] they would close the doors so that one class wouldn’t disturb the other one…”[6] Marysville School would be even more thoroughly described in 1935, when the Works Progress Administration surveyed the school for the State of South Carolina School Building Survey. Known in this survey as the Pacolet Mills Colored School, it describes in fascinating detail the condition and make-up of the school as it was in 1935. In one section it describes the size of the two classrooms. Room #1, which was used for grades 3-6, measured 30 feet in width by 23 feet in length. Room #2, used by grades 1 and 2, was almost identical; measuring 29 feet wide by 23 feet long.[7] Other information was also made clear by this survey which gave evidence of the neglect the school was in by this time. The survey lists 2 pit toilets used by the students, which were in poor condition. The general cleanliness of the toilet was listed as “bad” and was not satisfactorily screened from flies.[8] In addition, the coal heating system was listed as to not being in use because of bad condition.[9] It was not all bad, however. The school did have the means to serve hot lunches to the students10, and the overall condition ofthe school was listed as being in "…very good shape."[11] Also attached to this survey is a sketch of the floor plan, and pictures of the school.

It is apparent from the sketch, as well as the photos, that the building underwent many changes after 1935. The most obvious change was the addition of a third classroom, built at a right angle to the front of the building. In addition, changes were made to add a kitchen in the lower level on the rear of the school. Although the exact date these changes were made it not known, Betty Littlejohn, a former student at the school, states they were made before 1950.[12]

Regardless of these changes, the school would become obsolete by 1954. Not because of inadequate facilities, but, due to the decision of the Supreme Court in the landmark Brown vs. the Board of Education. In that case, the Supreme Court decided that segregating schools was illegal under the constitution. All schools were to become integrated, making Marysville School unnecessary. By then, the mills, houses, and Marysville School were the property of the Milliken Corporation. In 1998, Marysville School was acquired by the nearby Montgomery Chapel Baptist Church. The Church would use the school sparingly, and it soon became a storage facility for pews, records, and so on. In 2004, the building was given to the Town of Pacolet, who plans to restore and preserve the school as a cultural location.