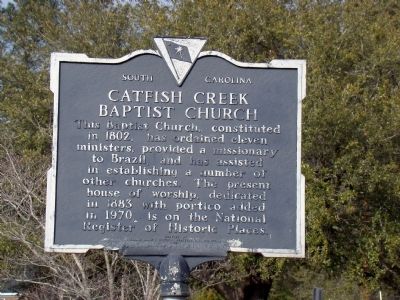 Photographed By J. J. Prats, February 26, 2009
1. Catfish Creek Baptist Church Marker
Inscription.
Catfish Creek Baptist Church. . This Baptist Church, constituted in 1802, has ordained eleven ministers, provided a missionary to Brazil, and has assisted in establishing a number of other churches. The present house of worship, dedicated in 1883 with portico added in 1970, is on the National Register of Historic Places. . This historical marker was erected in 1977 by Dillon County Historic Preservation Commission. It is Near Latta in Dillon County South Carolina

This Baptist Church, constituted in 1802, has ordained eleven ministers, provided a missionary to Brazil, and has assisted in establishing a number of other churches. The present house of worship, dedicated in 1883 with portico added in 1970, is on the National Register of Historic Places.

Topics. This historical marker is listed in this topic list: Churches & Religion. A significant historical year for this entry is 1802. 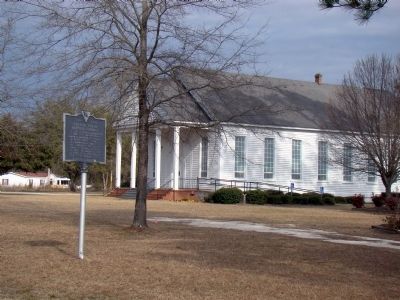 Regarding Catfish Creek Baptist Church. The church is in the countryside. There is a large brick building across Dalcho Road from the church, perhaps a school.

Also see . . .  National Register of Historic Places Nomination Form (1975). “In 1802 the reorganized Catfish Creek Baptist congregation built a crude, log church on this site which was replaced, within a decade, by a clapboard building constructed of cypress. In 1849, the cypress church became too small and a larger structure was built which was in use until completion of the present sanctuary in 1883.

“The present 1883 structure, constructed of pine, is 60 feet long and 40 feet wide. The facade consists of a centrally placed, stilted arch entrance with two, four-panel sliding doors which become recessed into the wall when opened. The four wooden steps which led to the entrance have been replaced by brick steps which extend the width of the building. The four original 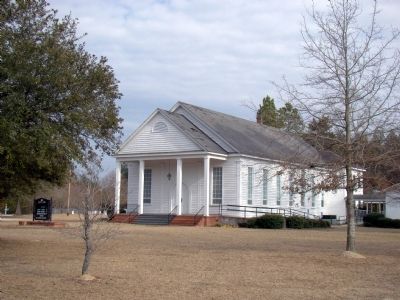 Photographed By J. J. Prats, February 26, 2009
3. Catfish Creek Baptist Church
pilasters, located on either side of the entrance and at the corners of the facade, remain intact. Large rectangular, twenty-four pane windows occupy bays on either side of the main entrance. Originally all windows had six-panel louver shutters which have been removed in recent years.

“Side walls have twenty-four pane, rectangular windows identical to those of the facade.

“The present brick steps and brick portico with pediment and four supporting columns were added in 1970. The only other major addition is the educational building (constructed in 1948) which adjoins the sanctuary but is not visible from the front view.

“The interior of the sanctuary remains largely unchanged and furnishings are original. Pews of side aisles are unusual in that they are attached to the wainscoting. Convex walls on either side of altar provide space for baptismal dressing rooms. Large doors in the floor beneath the pulpit provide access to baptistry pool.

“Statement of Significance. Catfish Creek Baptist Church typifies the significant Baptist tradition in the South Carolina Pee Dee region established by the Welsh Baptists who migrated from Pennsylvania (now part of Delaware) in 1735. The Pee Dee, second oldest center of Baptist influence for South Carolina, was settled by Welsh settlers who took advantage of Crown policy of land grants to encourage colonization in areas uninhabited by English speaking people.

“By January of 1738 a Baptist church (at first called Pee Dee but later renamed Welsh Neck) had been constituted, reaffirming the religious traditions established as the Welsh were leaving Wales in 1701.

“Numerous churches grew out of the Welsh Neck Church with the oldest branch being Catfish Church. Located near the mouth of Catfish Creek, this church remained a branch of Welsh Neck until its separate constitution in 1752. By 1789, however, the original Catfish Church had become extinct.

“In 1802 another congregation, taking the name Catfish, was formed farther upstream from the earlier location. This group was a direct outgrowth of the religious movement that was sweeping the country and South Carolina during the period and is important as an example of how the Great Awakening brought tremendous growth for Baptists in the state, an 80% increase from 1801 to 1803.

“Catfish Church initially met in a log structure, the first of four houses of worship on this site.

“Since its inception, Catfish Creek Baptist Church has played a significant role in area settlement and religious development. Although it is the oldest church congregation in Dillon County, it has never gained a large membership because numerous letters of dismissal were granted to those who wanted to organize other congregations.

“The first church formed in this manner was Antioch Baptist in 1829. Catfish Creek also served as the mother church for Sardis and Little Bluff in the 1870s, Olive Branch in 1886, and Latta Church in 1891.

“Catfish Creek Baptist Church has also had eleven members to become ordained ministers and one to serve as a missionary.

“Architectural Significance: Catfish Creek Baptist Church is similar to many simple meeting house style churches in South Carolina except for a few added embellishments which give it a greater degree of sophistication. Architectural detail includes the arched, four-panel doorway which recedes into the wall when opened, the four ornamental pilasters on the facade, and the triple hung sash windows (originally shuttered). Unusual interio architectural features are convex walls and trap doors under pulpit which open to reveal baptismal pool.” (Submitted on April 10, 2009.)
Credits. This page was last revised on June 16, 2016. It was originally submitted on April 10, 2009, by J. J. Prats of Powell, Ohio. This page has been viewed 1,738 times since then and 53 times this year. Photos:   1, 2, 3. submitted on April 10, 2009, by J. J. Prats of Powell, Ohio.

Editor’s want-list for this marker. Detailed photos of the church and interior. • Can you help?
Share this page.