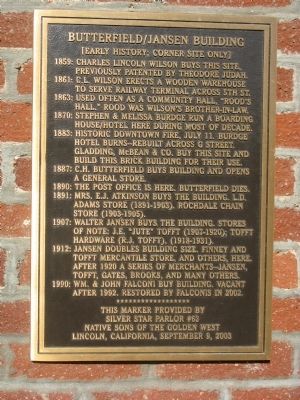 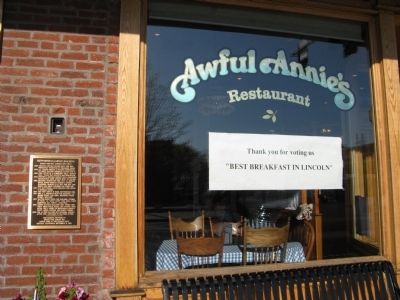 Topics and series. This historical marker is listed in these topic lists: Industry & Commerce • Notable Buildings • Notable Places • Railroads & Streetcars • Settlements & Settlers. In addition, it is included in the Native Sons/Daughters of the Golden West series list. A significant historical month for this entry is July 1675. 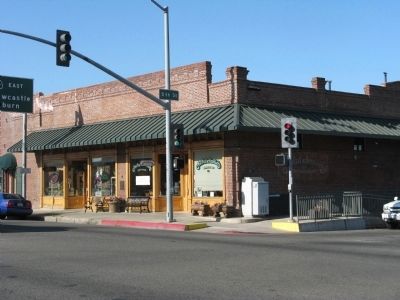 Photographed By Syd Whittle, April 6, 2009
3. Butterfield/Jansen Building
Corner Site as Mentioned on Marker Title
Beerman Plaza (about 300 feet away); Lincoln World War II Memorial (about 600 feet away); Colonel C. Lincoln Wilson (about 700 feet away); McTyeire Memorial Church (approx. 0.2 miles away). Touch for a list and map of all markers in Lincoln.

Also see . . .  Feats of Clay Magazine has a great Walking Tour of Old Town-Lincoln. Its Description of the Butterfield Building:
Lincoln’s founder Charles Wilson, had a wooden frame building here in the early 1860’s. His brother-in-law, Henry Rood, operated the building as “Rood Hall”. By 1870 Stephen and Melissa Burdge ran a boarding house in the building, known as the Burdge Hotel. It burned down in the big fire of 1883 (the Burdges built a new hotel on the corner across the street.) Gladding, McBean & co. then built a brick store building here and kept it until 1887. C.H. Butterfield bought it and operated a store here until his death in 1891. In the first half of the 20th century the chain store Rochdale Store was here from 1903-1905. Walter Jansen had the space for awhile as did Lincoln Frozen locker Co. and then the Red & White Store #2. Currently the building has been restored as Lincoln Brand feeds and Awful Annies and Cally Lilly Crossing occupies this 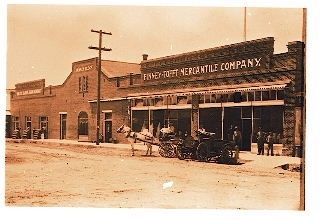