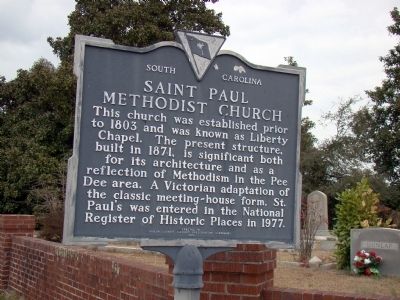 Photographed By J. J. Prats, February 26, 2009
1. Saint Paul Methodist Church Marker
Inscription.
Saint Paul Methodist Church. . This church was established prior to 1803 and was known as Liberty Chapel. The present structure, built in 1871, is significant both for its architecture and as a reflection of Methodism in the Pee Dee area. A Victorian adaptation of the classic meeting-house form, St. Paul’s was entered in the National Register of Historic Places in 1977. . This historical marker was erected in 1978 by Dillon County Historic Preservation Commission. It is in Little Rock in Dillon County South Carolina

This church was established prior to 1803 and was known as Liberty Chapel. The present structure, built in 1871, is significant both for its architecture and as a reflection of Methodism in the Pee Dee area. A Victorian adaptation of the classic meeting-house form, St. Paul’s was entered in the National Register of Historic Places in 1977.

Topics. This historical marker is listed in this topic list: Churches & Religion. A significant historical year for this entry is 1803. 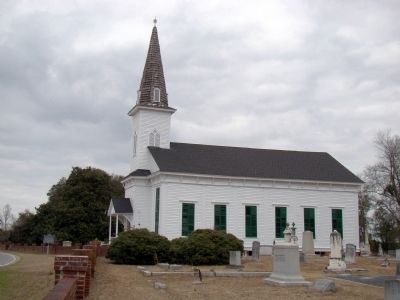 Also see . . .  National Register of Historic Places Nomination Form (1977). Form prepared by Kathy Hendrix with John C. Henagan. “St. Paul’s Methodist Church, constructed ca. 1871, is an example of the transitional Italianate Victorian vernacular style of architecture. The building stands, unaltered, near Little Rock, South Carolina (earlier known as Harlleesville, South Carolina). Both St. Paul’s and its predecessor, Liberty Chapel, have been important in the religious life of this community, and the church remains today a local landmark in Dillon County.

“Architecture: St. Paul’s Methodist Church is an excellent example of the transitional Italianate Victorian vernacular style that developed between the Greek Revival and Queen Anne periods. Constructed ca. 1871, the building employs stylistic motifs in-dicative of several different styles. The basic structure is a classic meeting house form divided into bays through the use of slender pilasters. Tall, narrow 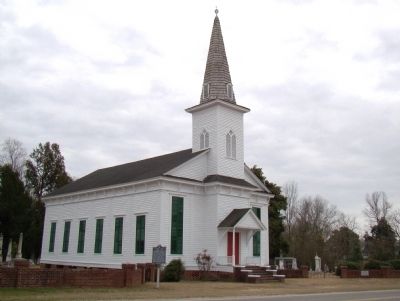 “Dominant features of the structure are the bell tower and steeple. Other Victorian decorations on the faces of the tower include pointed-arch louvers, gabled dormers, and imbricated shingles. The interior of the church is significant because of its original pews, altar rail and furniture, coved ceiling, and narrow beaded paneling arranged in herringbone pattern.

“Religion: The history of St. Paul’s Methodist Church is directly linked with that of Liberty Chapel. Early records have been lost; however, local tradition indicates that Liberty Chapel’s history dates from the late 18th or early 19th Centuries. There is strong local tradition that Francis Asbury, who traveled in the Pee Dee area in 1807, was influential in the growth of Methodism in the community of Harlleesville (later known as Little Rock) and in the development of Liberty Chapel.

“By 1814, a church known as Liberty Chapel had definitely been established, for in that year Philip Bethea, in his will, ordered the sale of his estate and ‘...one equal share with the above named persons to be appropriated to the repairs of Liberty Chapel and the Graveyard....’ Several years later, in 1823, Liberty Chapel received as a gift the land where the present St. Paul’s Church now stands. Thomas Harllee, Sr., in July 1823, donated one acre of land to the Trustees of the Methodist Society at Liberty Chapel for the purpose of constructing a meeting house. In 1820, Harllee had received a grant from the state of South Carolina for 998 acres of land which included the acreage he later donated to Liberty Chapel. Filed in the Marion County Plat Book is a plat for this grant. From the deed description of the donated land, the site of Liberty Chapel can be located. The present day St. Paul’s Church is located in this same area.

“Records show that Liberty Chapel made contributions to the Quarterly Conference of the Methodist Church in 1830, 1840, and 1845. In 1844, Thomas Harllee, Jr., donated ‘...to the trustees of the School At Liberty Chapel,...a right to the Schoolhouse including a half acre of land....’

Editor’s want-list for this marker. Additional photos of the church and its interior • Can you help?
Share this page.