An Historic Landmark in Architecture 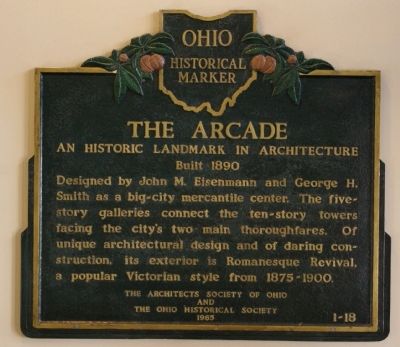 Photographed By Christopher Busta-Peck, April 11, 2009
1. The Arcade Marker
Inscription.
The Arcade. An Historic Landmark in Architecture. , Designed by John M. Eisemann and George H. Smith as a big city mercantile center. The five-story galleries connect the ten story towers facing the city's two main thoroughfares. Of unique architectural design and of daring construction, its exterior is Romanesque Revival, a popular Victorian style from 1875-1900. . This historical marker was erected in 1965 by the Architects of Ohio and the Ohio Historical Society. It is in Cleveland in Cuyahoga County Ohio

Erected 1965 by the Architects of Ohio and the Ohio Historical Society. (Marker Number 1-18.)

Topics and series. This historical marker is listed in this topic list: Notable Buildings. In addition, it is included in the National Historic Landmarks, and the Ohio Historical Society / The Ohio History Connection series lists.

Other nearby markers. At least 8 other markers are within walking distance of this marker. Ohio State Bar Association (about 400 feet away, measured in a direct line); Commerce 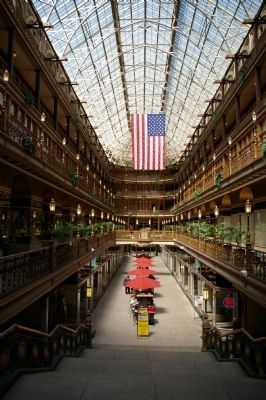 Photographed By Christopher Busta-Peck, April 11, 2009
2. Interior of the Cleveland Arcade

More about this marker. For many years, the marker was sited outside the Arcade. Hyatt moved the marker inside at the same time that they added the architecturally incompatible awning to the front of the building.

This marker is numbered 1-18 on its face. However, it is listed as marker 2-18 by the Ohio History Connection, formerly The Ohio Historical Society.

Regarding The Arcade. The Arcade is a National Historic Landmark. 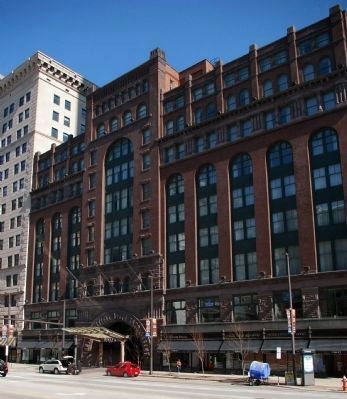