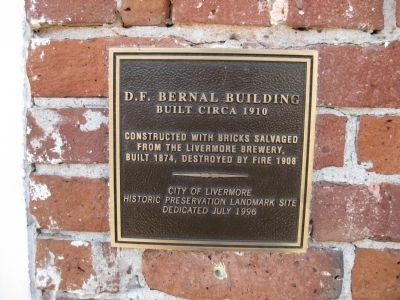 Constructed with bricks salvaged from the Livermore Brewery, built 1874, destroyed by fire 1908

Erected 1996 by City of Livermore. 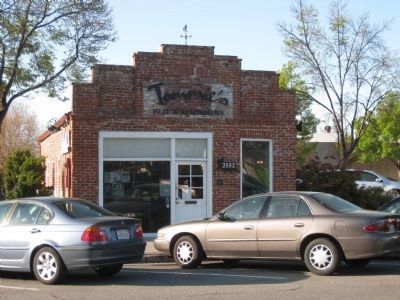 Photographed By Andrew Ruppenstein, April 5, 2009
2. D. F. Bernal Building Marker
Just two blocks from here, on First Street, stood the Livermore Brewery, owned by Wendell Jordan from 1875 until he met his untimely death in January 1901 when he fell into a vat of boiling malt. Dennis F Bernal bought the brewery from his widow in June 1901. The brewery lasted until November 1908, when it was destroyed by fire. Bernal and his family, who had been living above the brewery, survived the fire, as did Mrs. Bernal's savings of $2,000 in gold coins, which had been hidden in a receptacle behind the chimney. The brewery's bricks found a second life in the construction of this building.

Also see . . .  Livermore's Centennial Light. A history of the 100+ year old light bulb that was donated by Dennis Bernal to the Livermore Fire Department. (Submitted on April 12, 2009.) 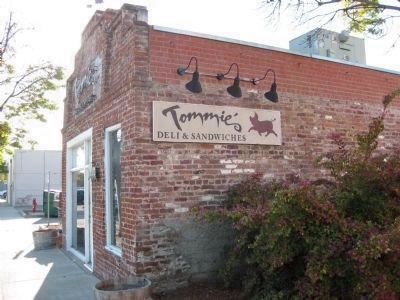 Photographed By Andrew Ruppenstein, April 5, 2009
3. D. F. Bernal Building - View from Southeast
Dennis Bernal is also known as the donor of what is (at least as of 2007 and certified in the Guinness Book of World Records) the oldest known working light bulb. In 1901, Bernal, the owner of the Livermore Power and Light Company, donated the 4-watt handblown bulb with carbon filament to Livermore's fire department.