Retrieving and Restoring this Buzz Bomb 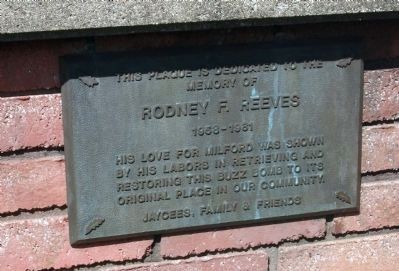 This plaque is dedicated to the memory of Rodney F. Reeves
1958 - 1981
His love for Milford was shown by his labors in retrieving and restoring this Buzz Bomb to its original place in our community.

Topics. This historical marker is listed in these topic lists: Air & Space • War, World II. A significant historical year for this entry is 1958.

Location. 40° 37.654′ N, 87° 41.872′ W. Marker is in Milford, Illinois, in Iroquois County. Marker is on South Chicago Street north of East Lyle Street, on the left when traveling north. Touch for map. Marker is in this post office area: Milford IL 60953, United States of America. Touch for directions. 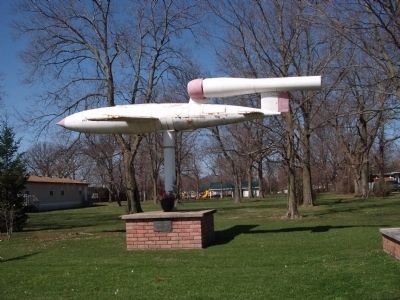 Regarding Rodney F. Reeves 1958 - 1981. The Milford Buzz Bomb was stolen and ended up in the State of Texas. After being located it was retrieved, brought back to Milford, and then restored.

Milford Illinois - Rare Buzz Bomb (V-1) - American Made.
(As per the “Milford Herald-News” newspaper of March 28, 1979) “The missile is an American-made replica of the German bomb that was used extensively against England during World War II.

The missile was made so that the Air Force could develop a defense against it as well as to enable them to study it thoroughly. ...It is a comparatively rare bird, and there are a few of them known (to exist).”

Milford gets the Buzz Bomb
(Courtesy of an Unknown article by: Lewis Mitchell and Andrew Adsit) “The story has its beginning at the end of World War II (1945) when the young men were returning home and many were seeking to do something for their communities.

Gene Seaman, Commander of Forrest Ballard American Legion Post No. 723 ... (applied) for a souvenir of the war which could be placed in the village park. The day finally arrived when the word 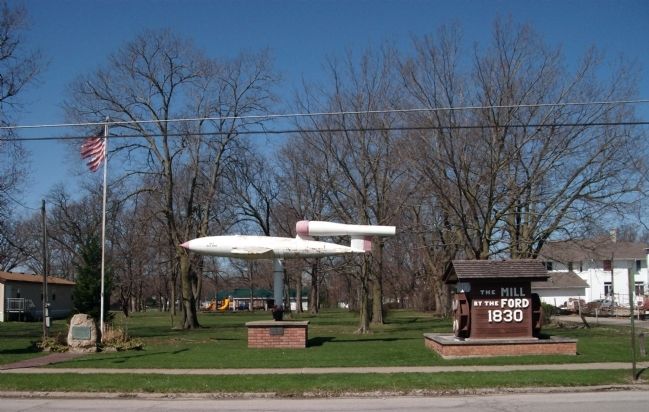 Photographed By Al Wolf, April 11, 2009
3. Retrieving and Restoring this Buzz Bomb Marker
was sent for members of the post to pick up the souvenir at Chanute Air Force Base at Rantoul.

(They) borrowed a farm implement truck and, as one of the men remembers, “we gasped in amazement as an officer proudly pointed to a huge bomber and told us that was our prize.

After considerable jawing, the officer shrugged towards a much smaller piece of equipment and told us there was the only alternative, “take that piece of junk or nothing.

The missile was loaded on the truck and transported to Milford, where it was painted and given insignia of the United States Air Force and placed on a concrete base in the township park in the Village.

There it sat for nearly thirty (30) years!

During “Fun Days” 1975 - - Buzz Bomb is Stolen.
(Courtesy: “Milford Herald-News” March 28, 1979) “...two men showed up with papers authorizing the pick up of the missile and transporting it to Wright-Patterson Air Force Base near Dayton, Ohio where it was to be restored and returned to the village. ...They promised that the missile would be back in place by the time of the following year’s “Fun Days” celebration and even talked of timing its return so it could be in the big parade.

...about a year later ... questions were asked about its whereabouts. Inquiries to Wright-Patterson officials produced nothing except a denial of any knowledge of the missile. ...a reply from the F.B.I. stated that the missile had indeed been stolen from Milford and named the individuals involved, although the Federal Attorney in Danville as well as Dayton declined to prosecute them.

The F.B.I. report also traced the missile to the Confederate Air Force in Harlingen, Texas, an organization which maintains an extensive museum and is dedicated to the preservation of World War II aircraft.

In the Spring of 1979 ...The newly-formed Jaycees of Milford decided to take on the project of returning the missile to Milford. The Village Board of Milford funded the project. Five men, a truck, and a trailer left ... for Texas. Making the trip were (Jaycee) President Andy Adsit, Greg Barker, Rob Murray, Rodney Reeves and Ben Smith.

Adsit reported that the group received the Red Carpet treatment at the base and they were given a special tour of the facilities and a flight in a World War II AT6 Texan trainer.

The trip home was reported uneventful with the exception of one incident when a motorist, apparently spotting the swastika on the tail started cursing the group and attempted to run them off the highway. The group received many C.B. inquiries about the missile, although they did tape over the Nazi Insignia at the first opportunity.”

The Buzz Bomb was brought back home safely March 26, 1979 to the Milford town Park.

2. Video of the Buzz Bomb - V 1 German Rocket Bomb::. (Courtesy of: YouTube) This is a well done old black and white video of how the Buzz Bomb worked and its use in World War II. (Submitted on April 12, 2009, by Al Wolf of Veedersburg, Indiana.)