The National Cathedral of African Methodism 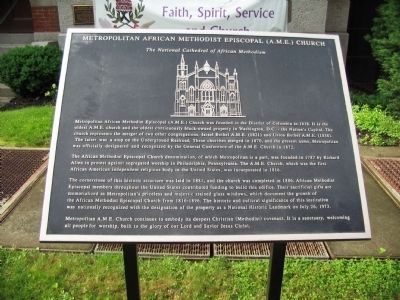 Metropolitan African Methodist Episcopal (A.M.E.) Church was founded in the District of Columbia in 1838. It is the oldest A.M.E. church and the oldest continuously black-owned property in Washington, D.C. - the Nation's Capital. The church represents the merger of two other congregations, Israel Bethel A.M.E. (1821) and Union Bethel A.M.E. (1838). The latter was a stop on the Underground Railroad. These churches merged in 1870, and the present name, Metropolitan was officially designated and recognized by the General Conference of the A.M.E. Church in 1872.

The African Methodist Episcopal Church denomination, of which Metropolitan is a part, was founded in 1787 by Richard Allen in protest against segregated worship in Philadelphia, Pennsylvania. The A.M.E. Church, which was the first African American independent religious body in the United States, was incorporated in 1816.

The cornerstone of this historic structure was laid in 1881, and the church was completed in 1886. African Methodist Episcopal members throughout the United States contributed funding to build this edifice. Their sacrificial gifts are memorialized in Metropolitan's 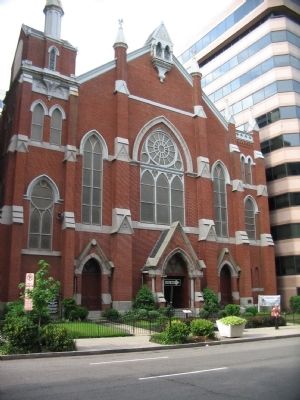 By Craig Swain
2. Metropolitan African Methodist Episcopal Church
The plaque is at the entrance on the right.
priceless and majestic stained glass windows, which document the growth of the African Methodist Episcopal Church from 1816-1896. The historic and cultural significance of this institution was nationally recognized with the designation of the property as a National Historic Landmark on July 26, 1973.

Metropolitan A.M.E. Church continues to embody its deepest Christian (Methodist) covenant. It is a sanctuary, welcoming all people of worship, built to the glory of our Lord and Savior Jesus Christ. 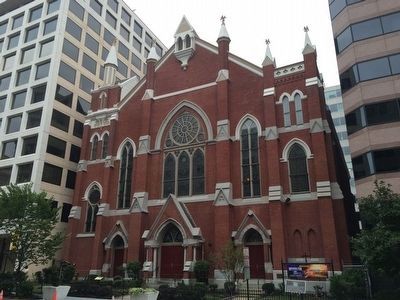 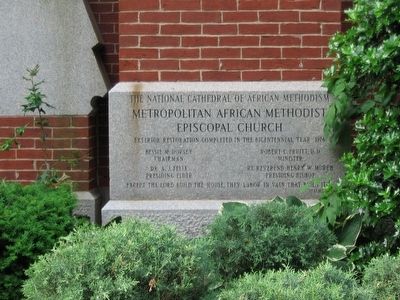