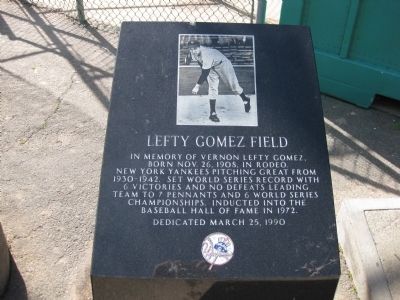 In Memory of Vernon Lefty Gomez, born Nov. 26, 1908, in Rodeo. New York Yankees pitching great from 1930-1942. Set World Series record with 6 victories and no defeats leading team to 7 pennants and 6 World Series Championships. Inducted into the Baseball Hall of Fame in 1972.

Topics. This historical marker is listed in this topic list: Sports. A significant historical date for this entry is March 25, 1990. 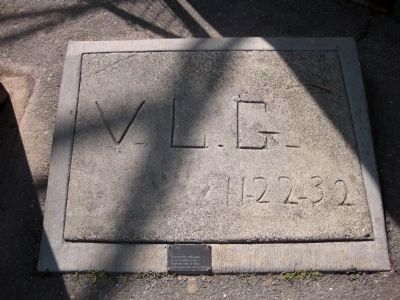 Photographed By Andrew Ruppenstein, April 12, 2009
2. Lefty Gomez - Handprint in Cement
After winning the 1932 World Series, Lefty returned home to Rodeo and left the town a souvenir - a handprint of his pitching (left) hand. Both the handprint (immediately below his middle initial) and date, 11-22-32, are still visible today.

More about this marker. The marker is about 15 feet to the left (south) of home plate.

While playing with the Yankees, Gomez recorded a number of remarkable accomplishments:


Gomez was known for his pitching and his personality. His plaque in Yankee Stadium's Monument Park read, "Noted for his wit and his fastball, as he was fast with a quip and a pitch."

In 1933, Gomez married June O'Dea. They had three children: Vernona, Sharon, and Gary. 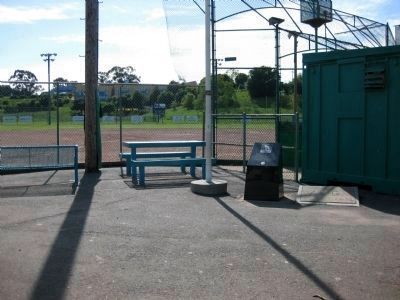 Photographed By Andrew Ruppenstein, April 12, 2009
3. Wide shot showing the slab with Lefty's handprint just to the right of the marker
In the background is the Lefty Gomez Ballfield.
in Larkspur on February 17, 1989. 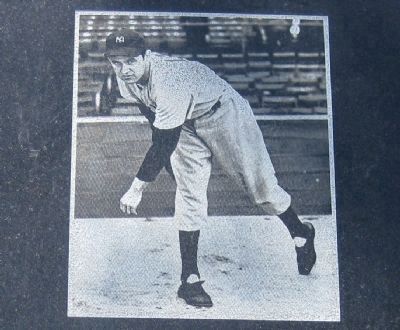