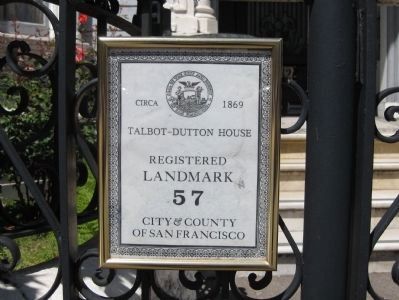 
Topics. This historical marker is listed in this topic list: Notable Buildings. A significant historical year for this entry is 1869.

More about this marker. The marker is located on the fence directly to the left of the front gate, with a matching interpretive sign directly to the right of the gate. The Talbot-Dutton House is a private residence.

Regarding Talbot-Dutton House. {The following 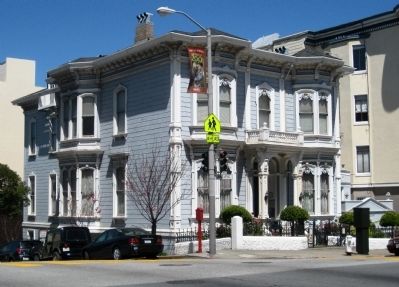 Click or scan to see
this page online
text is taken verbatim from the interpretive sign to the right of the front gate:}
In the late 1860's, San Francisco was young and growing, with the gold fever still at play. Many of the large homes, beside the mansions on Rincon and Nob Hills, were being erected along the Van Ness corridor and nearby perimeter. In those days, the sidewalks were wooden and the view down to the bay included vast pasture land known as "Cow Hollow".

William Chaloner Talbot was born in East Machias, Maine in 1816 and later entered his father's lumber and shipping company. In 1850 William Talbot sailed around "Cape Horn" to California with a cargo of lumber and rare woods on board the tall sail schooner "Oriental". He established his own firm, W.C. Talbot and Co., and engaged in lumber trade along the coast of South America and the Hawaiian Islands. Talbot established a sawmill at "Port Gamble", Washington with his brother-in-law, Andrew J. Pope, and became the Pope and Talbot Lumber Co., still in existence to this day.

It was in the year 1869 that William Talbot decided to purchase the property and erect this house as a wedding gift to his beautiful daughter "Mary" and the handsome socialite "Henry Dutton Jr." upon their marriage. This elaborate two story wooden structure was built completely from Redwood from yjr Washington forests and from rare imported woods from South America. 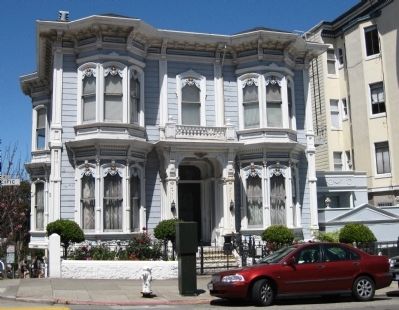 Photographed By Andrew Ruppenstein, April 18, 2009
3. Talbot -Dutton House - Front View
This style of architecture was greatly in fashion from the late 1860's through the mid 1870's and remains an excellent example of "Italianate Townhouse".

Fortunately, this beautiful Victorian structure was saved from the devastation of "The Great Earth Quake and Fire" of 1906, which had stopped at "Van Ness Avenue" only one block away. Many of the Victorian homes which were built in this area in during the late 19th Century have been removed and replaced with larger structures. Yet, still, a few remain in existance for the enjoyment of people from all over the world who find pleasure in the heritage of San Francisco. 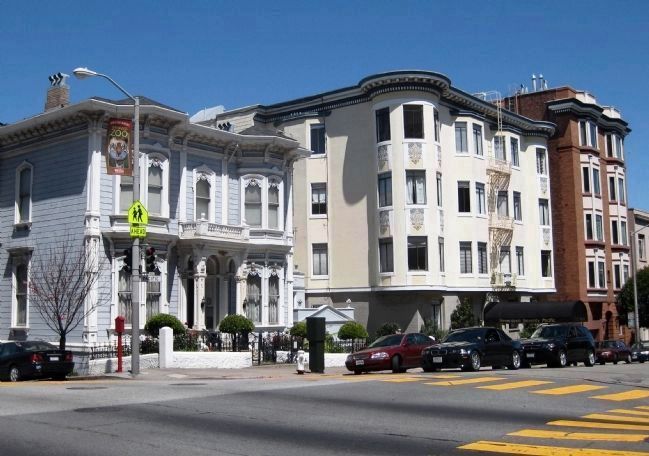