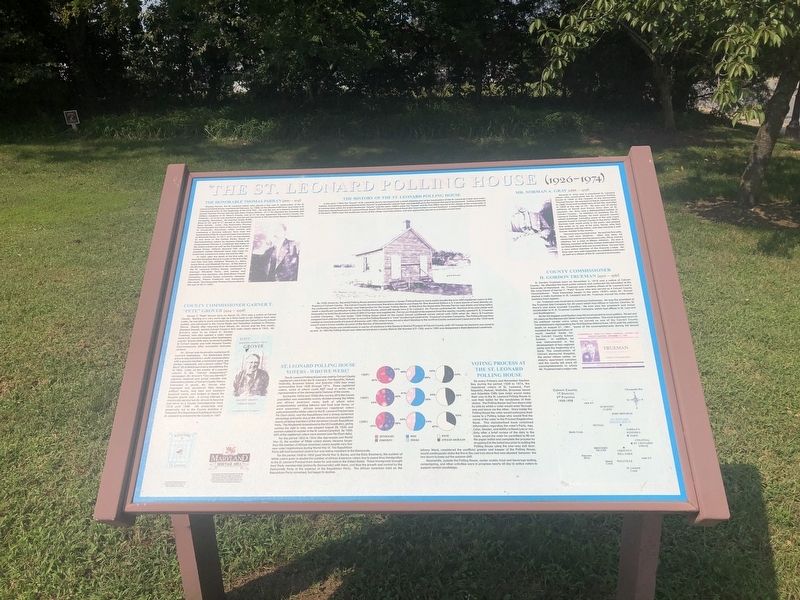 The Honorable Thomas Parran (1860-1955)
Thomas Parran, the St. Leonard citizen who played a key role in the construction of the St. Leonard Polling House, was born on February 12, 1860, on the Chestnut Hill Farm (see map) in St. Leonard just prior to the beginning of the Civil War. He was the son of a tobacco farmer also named Thomas Parran and his wife Mary Evelyn Sollers. At 17 he attended the Charlotte Hall Military Academy in St. Mary's County, and at 21 he was appointed the Calvert County Tax Collector. At 23 he was elected to and served two terms in the Maryland House of Delegates in Annapolis, Maryland. He married Annie Griffis Bond at 25, and at 27 served in the Maryland State Senate. Later, The Honorable Thomas Parran became the Clerk of the Court of Appeals in Annapolis, Maryland, while owning and managing a thriving tobacco farm near the headwaters of the St. Leonard Creek (now known as Windmill Farm). In 1911, at 51, he was elected to one term in the United States House of Representatives where he became friends with Congressman Charles A. Lindbergh (the father of the noted aviator) as well as President of the United 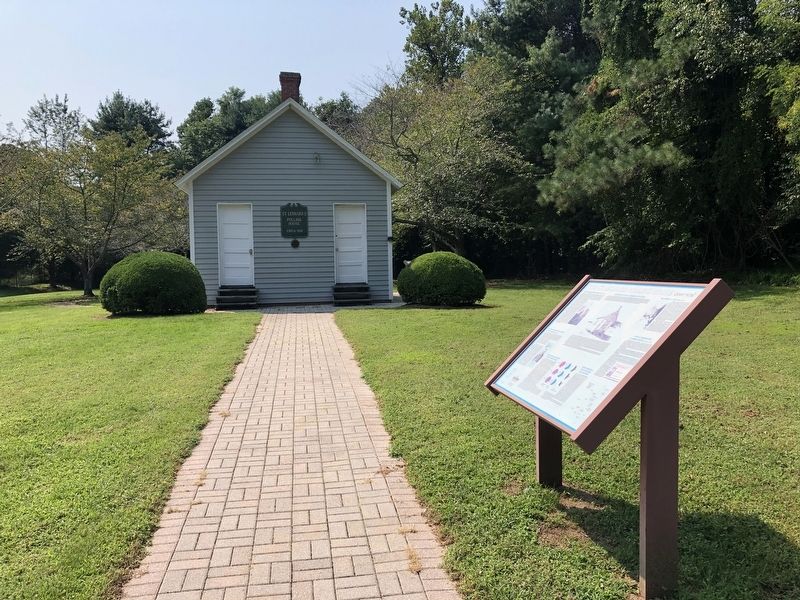 In 1920, after the death of his first wife, he married Madeline Bond (a cousin of his first wife) and they had four children: Thomas Jr., Mary, Annie Bond, and Elizabeth Parran. At this time in his life he was instrumental in the construction of the St. Leonard Polling House, continued to manage Windmill Farm, and owned and operated a bus company, the West Shore Transit Company, running buses primarily between Solomons, Prince Frederick and Annapolis, Maryland. The Honroable Thomas Parran died at the age of 95 in 1955.

County Commissioner Garner T. "Pete" Grover (1914-1998)
Garner T. "Pete" Grover born on March 10, 1914 was a native of Calvert County. Starting at a very early age as a farm hand on his father's farm near Lusby, he was able to work and study his way through the Calvert County school system, and advanced to the to the Coyne Radio and Television Institute in Chicago, Illinois. Shortly after returning from Illinois, Mr. Grover and his first cousin Sherbert Dowell, started Calvert County's first radio repair store in 1932. Mr. Grover's soon to be friend H. Gordon Trueman, who also opened a radio repair store in St. Leonard among other businesses, and Mr. Grover both were involved in politics in Calvert County and both became County Commissioners after successful business careers.

Mr. Grover was involved in numerous St. Leonard businesses. The Electronics Store grew in size and led to a multi-purpose plaza with a grocery market, a hardware store, gas station, restaurant, and a tavern called "The Boys" all of which survived a devastating fire in 1962. Later, as the creator of a popular column in the "Calvert Independent" newspaper, Mr. Grover's "Can you Identify?" columns captured and saved valuable and informative photos of Calvert County history. Interested in sports, Mr. Grover also organized and sponsored little league softball teams, and men and women's baseball teams, and helped to found the Bayside Sports club. A strong interest in community service led Mr. Grover to become and serve as a County Commissioner from 1978 until 1986. His leadership and generosity led to the County building a Volunteer Fire Department building on land in St. Leonard he donated to the County in 1987.

The History of the St. Leonard Polling House
In the early 1700's the "towne" of St. Leonards slowly developed into a small shipping port at the headwaters of the St. Leonards Creek (see map). Initially, land owning males gathered at the "towne" to periodically vote for their representatives in the Colonial Maryland government. Voting continued at various sites within the small headwater "towne" until the early 1900's when the "towne" and its Post Office moved to the village at the crossroads of Solomons Island Road (now St. Leonard Road, Route 765) and Calvert Beach Road (the Town Center's current location). A small Polling House was placed in the early 1900's near the southwest corner of the village road intersection, and was apparently placed on privately owned land.

By 1926, however, the small Polling House needed replacement by a larger Polling House to more easily handle the over 400 registered voters in the Precinct of Calvert County. The Calvert County Government therefore decided to purchase for One Hundred Dollars a 3/4 acre parcel of land directly on the southwest corner of the village road intersection for the larger Polling House. At this time the Honorable Thomas Parran (see photo and biography) made a significant contribution to this new Polling House, which still stands here in St. Leonard. Mr. Parran contracted Mr. Norman Gray (see photo and biography) to build the structure using $1800 of lumber and supplies Mr. Parran purchased at his expense from the nearby recently opened H.B. Trueman Lumber Company. The new larger 1926 Polling House stood on the county owned southwest corner parcel until 1930 when Mr. Harry B. Trueman swapped land with the County in order to move the Polling House to a "new" location just south of Mr. Trueman's Lumber Company. The Polling House thus resided on land just south of a gravel driveway until 1993 when it was moved a short distance to the north to County owned land (received in the 1930 land swap?) where it now resides as a part of the Garden of Remembrance.

This Polling House was continuously in use for all elections in this Electoral District/Precinct of Calvert County until 1974 when its electoral use came to an end. In 1984 the Polling House was restored and given a county Historic Site Number (CT-158), and in 1993 was designated a State Historical Landmark.

Curing the 1920s and 1930s (the roaring 20's) the County population was essentially evenly divided among the White and African American races, both of whom were predominantly working tobacco and food crop farms, or were watermen. African American registered voters outnumbered the White voters in the St. Leonard Precinct (see Pie Chart data), and the Republicans had a strong numerical advantage primarily due to the African American population nearly all being members of the Abraham Lincoln Republican Party. The Nineteenth Amendment to the US Constitution, giving women the right to vote, was adopted August 26, 1920, and women rushed to register in the St. Leonard precinct. By 1930, 40% of the registered voters were women (see Pie Chart data).

For the period 1932 to 1944 (the depression and World War II), the number of White voters slowly became larger than the number of African American voters despite very few new voter registrations during World War II! The Republican Party still had a numerical control but was losing members to the Democrats.

For the period 1946 to 1958 (post World War II, Korea, and the Baby Boomers), the number of White voters grew to double the number of African American votes due to peace time immigration to the St. Leonard Precinct from states far and wide in the United States. These immigrants brought their Party members (primarily Democratic) with them, and thus the growth and control by the Democratic Party at the expense of the Republican Party. The AFrican American hold on the Republican Party remained, but began to decline.

Voting Process at the St. Leonard Polling House
On every Primary and November Election Day during the period 1926 to 1974, the registered voters of St. Leonard, Port Republic, Mutual, Wallville, Broomes Island and Scientists Cliffs (see map) would make their way to the St. Leonard Polling House to cast their ballot for the candidates of their choice. The Polling House had two doors side by side by which a voter could enter through one and leave via the other. Once inside the Polling House the voter would announce their name to a Polling Judge who would find the name of the voter in the Precinct Registration Book. This alphabetized book contained information regarding the voter's Party, Age, Color, Gender, and Ability to Read (yes or no). Only after a brief review of the data in the book, would the voter be permitted to fill out the paper ballot and complete the process by dropping it in the ballot box prior to exiting the Polling House using the one-way exit door. Johnny Ward, considered the official greeter and keeper of the Polling House, would continuously stoke the fire in the cast iron stove that was situated between the two doors to keep out the autumn chill.

Meanwhile, outside the Polling House, oyster scalds, food and beverage tasting, campaigning, and other activities were in progress nearly all day to entice voters to support certain candidates.

Mr. Norman A. Gray (1888-1958)
Norman A. Gray was a prominent St. Leonard citizen who constructed the St. Leonard Polling House in 1926 at the request of the Honorable Thomas Parran. He was born in the St. Leonard area in 1888, lived and worked here all his life, and died in 1958 at the age of 70. He was one of seven children of David and Emma Gray also of St. Leonard. Mr. Gray was a distinguished builder in Calvert County. In addition to building the St. Leonard Polling House, he built several county school buildings, including some of the one-room schools found in Calvert County in the early 1900's. Norman took much pride in his work, and passed that pride on to one of his sons, David, who had apprenticed with his father, and also became a well known builder in the county.

Norman was married twice. He and his first wife, Rosa had nine children. After she died, the remarried and he and his second wife, Olive, had six children for a total of fifteen children. He was a lifelong member of Brooks United Methodist Church on Mackall Road and was buried there. He was also a very active member of the Masonic Lodge. Mr. Gray was very well respected as a building contractor as well as a citizen of the St. Leonard Community.

County Commissioner H. Gordon Trueman (1916-1981)
H. Gordon Trueman born on November 2, 1916 was a native of Calvert County. He attended the local public schools and continued his education at the University of Maryland. Mr. Trueman was a leading citizen of St. Leonard and a life-long friend of Garner T. "Pete" Grover who also served as a Calvert County Commissioner. Their friendship began in the early 1930's when Mr. Grover started a radio business in St. Leonard and Mr. Trueman moved his radio sales business from Appeal.

By far his biggest contribution was his involvement in local politics. He served 30 years on the Democratic State Central Committee. The most important years of his political career were when he served as one of the Calvert County Commissioners representing the First Election District from 1970 until his untimely death on August 27, 1981. Some of his accomplishments during his tenure included the appropriation of much needed funds for the Calvert County School System. In addition, he was instrumental in the development of two regional parks and the beginning of a third. The construction of Calvert Memorial Hospital, the senior citizen center, an elderly apartment complex and the county jail were all accomplishments in which Mr. Trueman had a major role.

Topics and series. This historical marker is listed in these topic lists: African Americans • Education • Government & Politics • Settlements & Settlers. In addition, it is included in the Former U.S. Presidents: #27 William Howard Taft series list. A significant historical date for this entry is February 12, 1860.