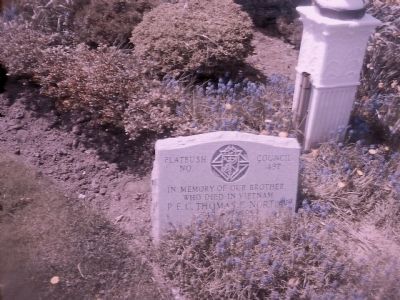 Photographed By Erik Lander, January 3, 2004
1. Thomas F Norton Marker
Inscription.
Thomas F Norton. .
In memory of our brother who died in Vietnam P. F. C. Thomas F. Norton 1947 - 1968. . This memorial was erected by Knights of Columbas Flatbush Council No. 497. It is in Brooklyn in Kings County New York

Erected by Knights of Columbas Flatbush Council No. 497.

Location. 40° 37.338′ N, 73° 56.039′ W. Marker is in Brooklyn, New York, in Kings County. Memorial is at the intersection of Flatlands Avenue and East 40th Street on Flatlands Avenue. Located on the grounds of The Knights of Columbus Flatlands Council No. 497. Touch for map. Marker is at or near this postal address: 3915 Flatlands Avenue, Brooklyn NY 11234, United States of America. Touch for directions.

Click or scan to see
this page online
(approx. ¾ mile away); Hendrick I. Lott House (approx. 0.8 miles away). Touch for a list and map of all markers in Brooklyn.

Also see . . .  Pvt Norton Playground. A playground was named in honor of Private Thomas Francis Norton (1947-1968), a Brooklyn native whose life was cut short in the Vietnam War (1964-1975). Norton was stationed there from 1967 until his death in 1968. During that period of time, the war reached a turning point when full scale combat became the norm, and heavy casualties ensued.

Born in the Marine Park section of Brooklyn, Norton attended St. Thomas Aquinas Elementary School on Flatbush Avenue. In 1961 he enrolled at Madison High School. Norton was a talented football player and chose to play for the Titans, a team sponsored by the Knights of Columbus. He attended high school for an additional year in order to meet the requirements of both his team and his school. The son of a Parks Department employee and a seasonal Parks employee himself, Norton enlisted in the army in his 20th year.

Thomas Norton had worked for Parks during the summers. His father, William Norton, worked as a Senior Supervisor of Park Operations with Parks and served as President of the Uniformed Park Officers Association during the 1960s. Thomas Norton received his high school diploma in 1966, enlisted in the Army and in 1967 was sent to Vietnam. In the following year, on April 22, 1968, Private Norton was killed in action in the province of Binh Duong in South Vietnam. Posthumously, Private Norton was promoted to the rank of Private First Class (PFC) and was awarded both the Silver and Bronze Stars in addition to the Purple Heart. His name appears on the Vietnam Memorial in Washington D.C. on panel 51E, Line 32. In the years following, a tree was planted in Central Park and a memorial placed in Marine Park in his honor.

PFC Norton Playground, located on Nostrand Avenue, just south of Kings Highway (approximately one mile south of this marker), was acquired by Parks on June 6, 1940. In 1969, Acting Commissioner William R. Ginsburg renamed the park for PFC Norton. The ceremony featured speakers from the County Headquarters of the American Legion and Fort Hamilton. Attendees included members from the Brooklyn chapters of the American Legion, Veterans of Foreign Wars, and Knights of Columbus. (Submitted on May 7, 2009, by Kevin W. of Stafford, Virginia.)

Additional commentary.
1. Added his name
I made sure my cousins name made the memorial for the NYC men and women killed in VM which is at the 55 Water Street "Friends of VM Memorial" in NYC. I lived next door to Tommy, he was my first cousin. I think of him often and miss what could have been. Roger Norton
— Submitted June 12, 2009, by Roger Norton of Miller Place, New York.
2. memorial stone
The KofC post was closed and the stone was placed in the back yard of a volunteer for safe keeping... THANK YOU. My brother Gerard found it in Brooklyn. FYI Thomas F Norton was our 1st cousin and lived next door to us on East 35th ST. we now have the memorial stone at my home on Long Island and we plan to place it at a VM memorial park in Sound Beach, NY. hope it works out...
as a note...tomorrow is the 50th anniversary of his death in NM.
Roger Norton...
— Submitted April 21, 2018, by Roger Norton of Miller Place, New York.
Credits. This page was last revised on January 20, 2020. It was originally submitted on April 28, 2009, by Erik Lander of Brooklyn, New York. This page has been viewed 1,313 times since then and 139 times this year. Photo   1. submitted on April 28, 2009, by Erik Lander of Brooklyn, New York. • Kevin W. was the editor who published this page.