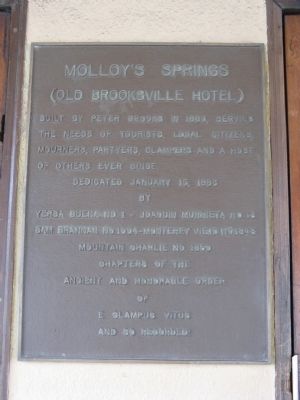 Photographed By Syd Whittle, April 24, 2009
1. Molloy’s Springs Marker
Inscription.
Molloy’s Springs. (Old Brooksville Hotel). , Built by Peter Brooks in 1883, serving the needs of tourists, local citizens, mourners, partyers, Clampers, and a host of others ever since. . This historical marker was erected in 1983 by Yerba Buena No.1 – Joaquin Murrieta No.13, Sam Brannan No.1004, Monterey Viejo No.1846, Mountain Charlie No.1850, Chapters of E. Clampus Vitus. It is in Colma in San Mateo County California

Built by Peter Brooks in 1883, serving the needs of tourists, local citizens, mourners, partyers, Clampers, and a host of others ever since.

Topics and series. This historical marker is listed in these topic lists: Industry & Commerce • Settlements & Settlers. In addition, it is included in the E Clampus Vitus series list. A significant historical date for this entry is January 15, 1947.

Location. 37° 40.21′ N, 122° 27.06′ W. Marker is in Colma, California, in San Mateo County. Marker is on Mission Road, on the right when traveling south. This marker is located at the entrance to Molloy's Springs Tavern. Touch for map. Marker is at or near this postal address: 1665 Mission Road, Daly City CA 94014, United States of America. Touch for directions. 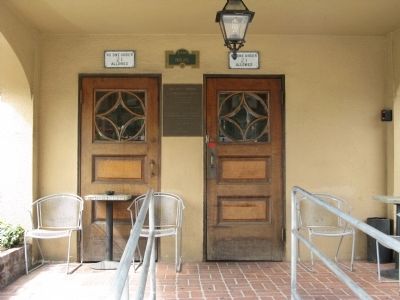 Additional commentary.
1. Molloy's Springs
Originally called the Brooks & Carey Saloon and later the Brooksville Hotel, this historic landmark is now known as Molloy's Tavern. It was built in 1883 along the Southern Pacific Railroad line to house workers who were engaged in cemetery building. It is the oldest commercial establishment in continuous operation in Colma. Frank Molloy purchased the building from Patrick Brooks in 1929. It has long been recognized as the center of Colma's Irish community. Today its walls are decorated with historic photographs and documents. Still, in the hands of the Molloy family, funeral parties congregate here to give a final toast to the departed.
— 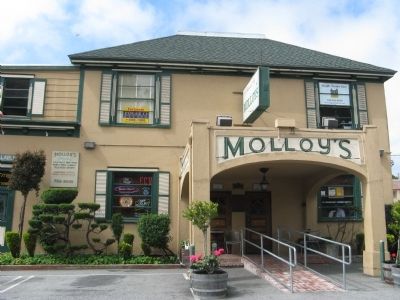