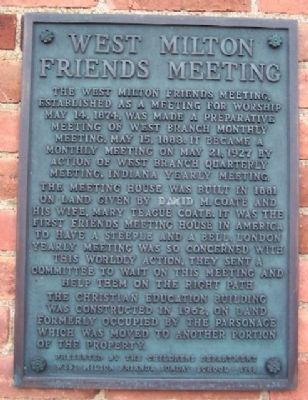 The West Milton Friends Meeting, established as a meeting for worship May 14, 1874, was made a preparative meeting of West Branch Monthly Meeting, May 15, 1883. It became a monthly meeting on May 21, 1927 by action of West Branch Quarterly Meeting, Indiana Yearly Meeting.

The meeting house was built in 1881 on land given by David M. Coate and his wife, Mary Teague Coate. It was the first Friends Meeting House in America to have a steeple and a bell. London Yearly Meeting was so concerned with this worldly action, they sent a committee to wait on this meeting and help them on the right path.

The Christian Education Building was constructed in 1962, on land formerly occupied by the parsonage which was moved to another portion of the property.

Topics and series. This historical marker is listed in these topic lists: Churches & Religion • Education • Notable Buildings. In addition, it is included in the Quakerism series list. A significant historical date for this entry is May 14, 1874. 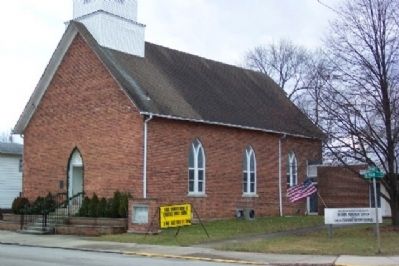 Click or scan to see
this page online
39° 57.788′ N, 84° 19.77′ W. Marker is in West Milton, Ohio, in Miami County. Marker is at the intersection of Main Street and North Street, on the left when traveling north on Main Street. Touch for map. Marker is at or near this postal address: 47 North Main Street, West Milton OH 45383, United States of America. Touch for directions.

Other nearby markers. At least 8 other markers are within 4 miles of this marker, measured as the crow flies. The Underground Railroad in West Milton (about 700 feet away, measured in a direct line); Charles Furnas 1880- 1941 (approx. ¼ mile away); West Milton Korean War Memorial (approx. 0.3 miles away); 1804 Quaker Meeting House (approx. 1.9 miles away); The Brick Wall (approx. 1.9 miles away); John Hoover (approx. 1.9 miles away); Hanktown (approx. 3.3 miles away); 1804 Iddings Log House (approx. 3.7 miles away). Touch for a list and map of all markers in West Milton.
Credits. This page was last revised on June 16, 2016. It was originally submitted on April 29, 2009, by William Fischer, Jr. of Scranton, Pennsylvania. This page has been viewed 1,165 times since then and 21 times this year. Photos:   1, 2. submitted on April 29, 2009, by William Fischer, Jr. of Scranton, Pennsylvania. • Christopher Busta-Peck was the editor who published this page.
Share this page.