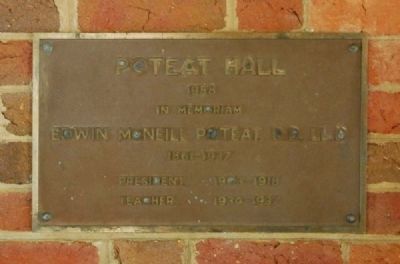 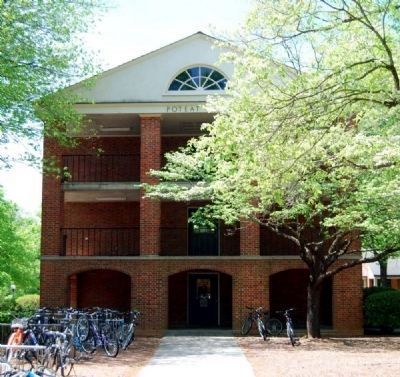 Photographed By Brian Scott, April 25, 2009
2. Poteat Hall
Poteat is named for Edwin McNeill Poteat who was Furman's president from 1903 to 1918. Before coming to Furman, Poteat was a pastor. He established the Bachelor of Science degree and separated biology and chemistry into two departments. Poteat was very supportive of student societies and clubs. Quaternion, leadership society was founded during Poteat's tenure. The Hornet, weekly newspaper, was established and intercollegiate athletics were revived. In addition to working closely with the students, Poteat also established a strong and dedicated faculty. (Source: http://www.furman.edu/housing/rhnew.htm#poteat.)

Additional commentary.
1. About Dr. Edwin M Poteat
Dr. Poteat was elected as the fourth president of Furman University on June 10, 1903. He was not a supporter of school athletics, considering them a necessary nuisance of college life. In 1904, football was suppressed. It was not restored until 1912. (Source: Furman University Chronology, compiled by Michael Orr, http://library.furman.edu/specialcollections/furman_chronology.pdf.) 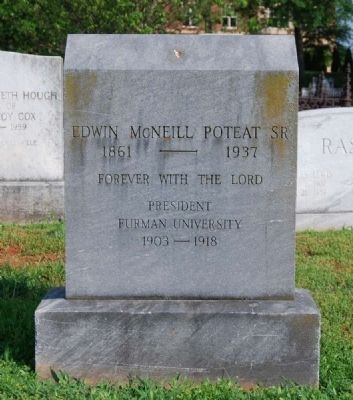 But where is the noise of their hurrying feet,
The crown they would offer, the sceptre, the seat?
Their King wanders hungry, forgot in the street,
Early on Monday.