The Bird Dog & Field Trial Capital of the World 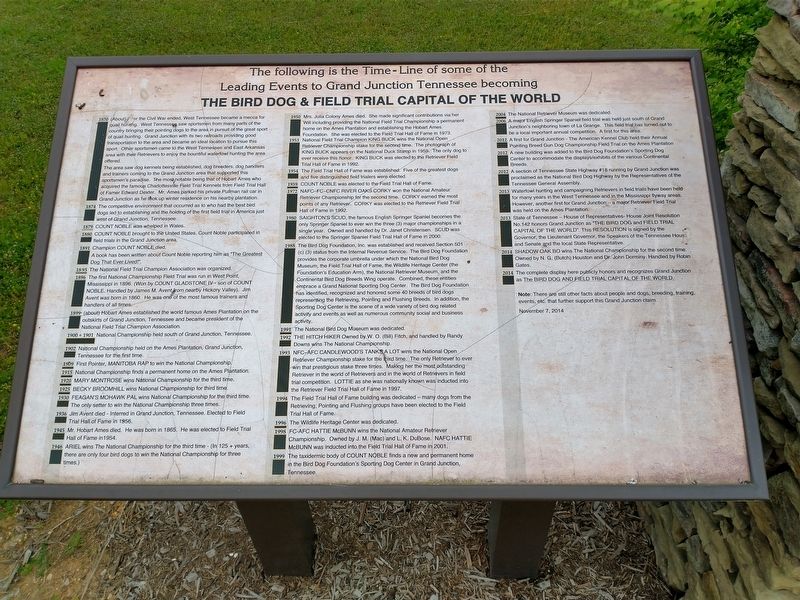 1870 (About) After the Civil war ended, West Tennessee became a mecca for quail hunting. West Tennessee saw sportsmen from many parts of the country bringing their pointing dogs to the area in pursuit of the great sport of quail hunting. Grand Junction with its two railroads providing good transportation to the area and became an idea location to pursue this sport. Other sportsmen came to West Tennessee and East Arkansas area with the Retrievers to enjoy the bountiful waterfowl hunting the area offered.

The area saw dog kennels being established, dog breeders, dog handlers and trainers coming to the Grand Junction area that supported this sportsmen’s paradise. The most notable being that of Hobart Ames who acquired the famous Charlottesville Field Trial Kennels from Field Trial Hall of Famer Edward Dexter. Mr. Ames parked his private Pullman rail car in Grand Junction as he took up winter residence on his nearby plantation. 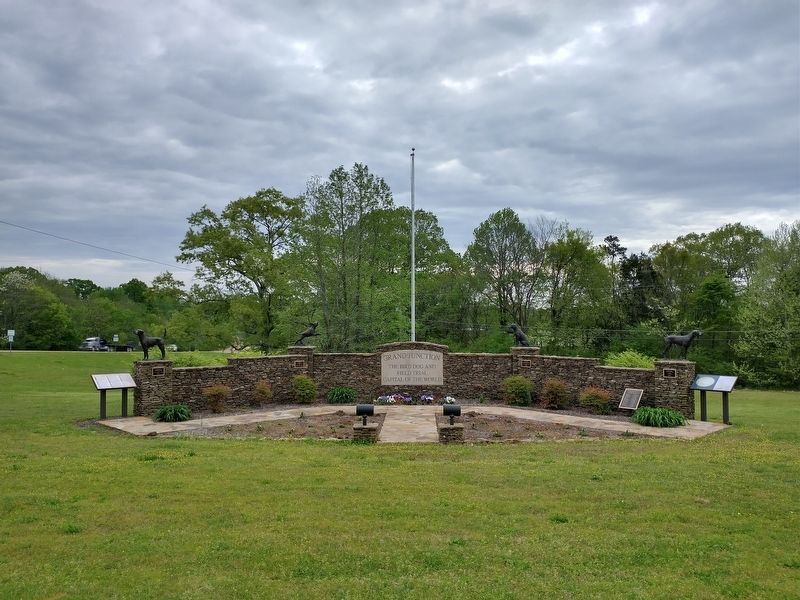 Click or scan to see
this page online
The competitive environment that occurred as to who had the best bird dogs led to establishing and the holding of the first field trial in America just west of Grand Junction, Tennessee.

1879 Count Noble was whelped in Wales.

1891 Champion Count Noble died. A book has been written about Count Noble reporting him as “The Greatest Dog That Ever Lived!”.

1896 The first National Championship Field Trial was run in West Point, Mississippi in 1896. (Won by Count Gladstone IV – son of Count Noble. Handled by James M. Avent from nearby hickory Valley). Jim Avent was born in 1860. He was one of the most famous trainers and handlers of all times.

1899 (About) Hobart Ames established the world famous Ames Plantation on the outskirts of Grand Junction, Tennessee and became president of the National Field Trial Champion Association.

1915 National Championship finds a permanent home on the Ames Plantation.

1950 Mrs. Julia Colony Ames died. She made significant contributions via her Will including providing the National Field Trial Championship a permanent home on the Ames Plantation and establishing the Hobart Ames Foundation. She was elected to the Field Trial Hall of Fame in 1973.

1954 The Field Trial Hall of Fame was established. Five of the greatest dogs and five distinguished field trailers were elected.

1959 Count Noble was elected to the Field Trial Hall of Fame.

1972 NAFC-FC-CNFC River Oaks Corky won the National Amateur Retriever Championship for the second time. Corky earned the most points of any Retriever. Corky was elected to the Retriever Field Trial Hall of Fame in 1992.

1988 The Bird Dog Foundation, Inc. was established and received Section 501 (c) (3) status from the Internal revenue Service. The Bird Dog Foundation provides the corporate umbrella under which the National Bird Dog Museum, the Field Trial Hall of Fame, the Wildlife Heritage Center (the Foundation’s Education Arm), the National Retriever Museum, and the Continental Bird Dog Breeds Wing operate. Combined, these entities embrace a Grand National Sporting Dog Center. The Bird Dog Foundation has identified, recognized and honored some 40 breeds of bird dogs representing the Retriever, Pointing and Flushing Breeds. In addition, the Sporting Dog Center is the scene of a wide variety of bird dog related activity and events as well as numerous community social and business activity.

1996 The Wildlife Heritage Center was dedicated.

2004 The National Retriever Museum was dedicated.

2006 A major English Spring Spaniel field trial was held just south of Grand Junction’s neighboring town of La Grange. This field trial has turned out to be a local important annual competition. A first for this area.

2012 A new building was added to the Bird Dog Foundation’s Sporting Dog Center to accommodate the displays / exhibits of the various Continental Breeds.

2012 A section of Tennessee State highway #18 running by Grand Junction was proclaimed as the National Bird Dog Highway by the representatives of the Tennessee General Assembly.

2013 Waterfowl hunting and campaigning Retrievers in field trials have been held for many years in West Tennessee and in the Mississippi flyway areas. However, another first for Grand Junction – a major Retriever Field Trial was held on the Ames Plantation.

2014 The complete display here publicly honors and recognizes Grand Junction as The Bird Dog and Field Trial Capital of the World.

Notes: There are still other facts about people and dogs, breeding, training, events, etc. that further support this Grand junction claim.

Topics. This historical marker is listed in these topic lists: Animals • Sports. A significant historical date for this entry is November 7, 2014.