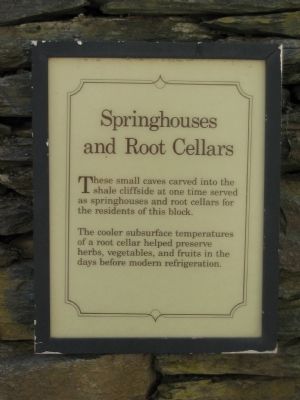 These small caves carved into the shale cliffside at one time served as springhouses and root cellars for the residents of this block.

The cooler subsurface temperatures of a root cellar helped preserve herbs, vegetables, and fruits in the days before modern refrigeration.

Location. 39° 19.381′ N, 77° 43.854′ W. Marker is in Harpers Ferry, West Virginia, in Jefferson County. Marker is on Church Street, on the right when traveling south. Located in the Lower Town section of Harpers Ferry National Historic Site, across the street from the Harper House. Touch for map. Marker is in this post office area: Harpers Ferry WV 25425, United States of America. Touch for directions. 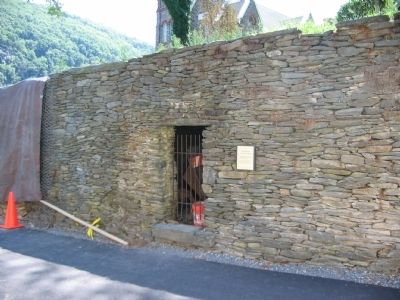 Photographed By Craig Swain, August 12, 2007
2. Root Cellar in the Wall along Church Street