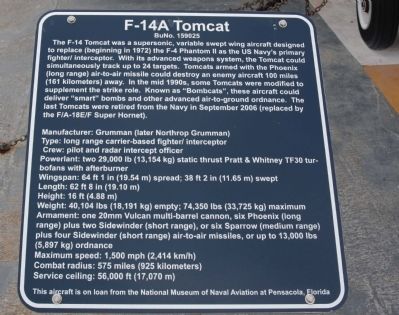 The F14 Tomcat was a supersonic, variable swept wing aircraft designed to replace (beginning in 1972) the F-4 Phantom II as the US Navy's primary fighter/ interceptor. With its advanced weapons systems, the Tomcat could simultaneously track up to 24 targets. Tomcats armed with Phoenix (long range) air-to-air missles could destroy an enemy aircraft 100 miles (161 kilometers) away. In the mid 1990s, some Tomcats were modified to supplement the strike role. Known as "Bombcats", these aircraft could deliever "smart" bombs and other advanced air-to-ground ordnance. The last Tomcats were retired from the Navy in September 2006 (replaced by the F/A- 18E/F Super Hornet). 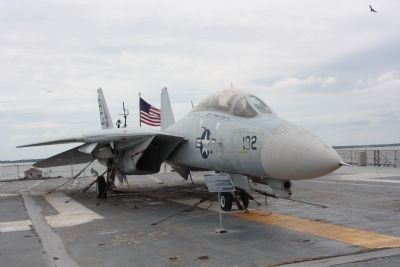 Topics. This historical marker is listed in this topic list: Air & Space. A significant historical month for this entry is September 2006. 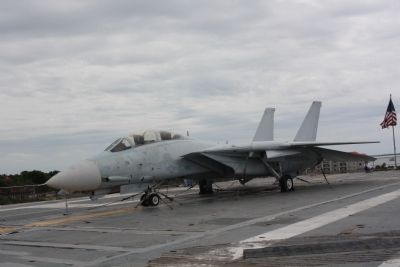 Photographed By Mike Stroud, May 12, 2009
3. F-14 Tomcat , two-seat long-range shipboard fleet defense interceptor, tactical reconnaissance
(within shouting distance of this marker); SH-3G Sea King (about 300 feet away, measured in a direct line); The A-7E Corsair II (about 300 feet away). Touch for a list and map of all markers in Mount Pleasant. 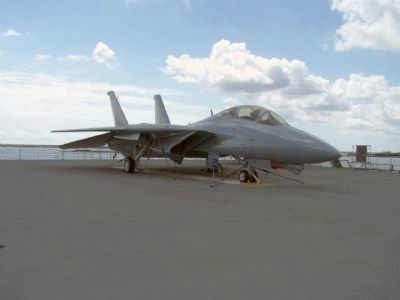