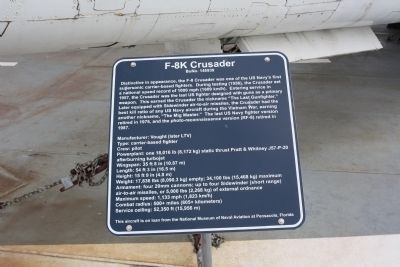 Distinctive in appearance, the F-8 Crusader was one of the US Navy's first supersonic carrier-based fighters. During testing (1956), the Crusader set a national speed record of 1000mph (1609 km/m). Entering service in 1957, the Crusader was the last US fighter designed with guns as a primary weapon. This earned the Crusader the nickname "The Last Gunfighter." Later equipped with Sidewinder air-to-air missiles, the Crusader had the best kill ratio of any US Navy aircraft during the Vietnam War, earning another nickname , "The Mig Master." The last US Navy version retired in 1976, and the photo-reconnaissance version (RF-8) retired in 1987. 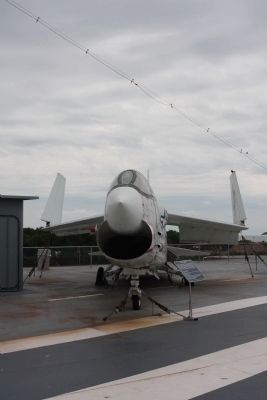 Topics. This historical marker is listed in these topic lists: Air & Space • War, Vietnam. A significant historical year for this entry is 1957.