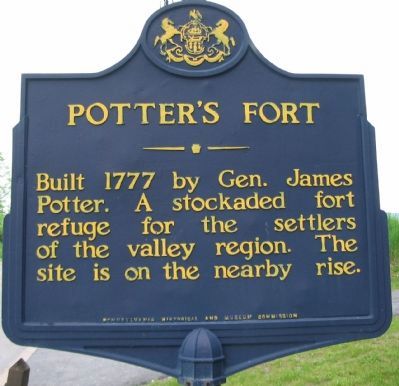 Photographed By Craig Swain, May 23, 2009
1. Potter's Fort Marker
Inscription.
Potter's Fort. . Built 1777 by Gen. James Potter. A stockaded fort refuge for the settlers of the valley region. The site is on the nearby rise. . This historical marker was erected in 1947 by Pennsylvania Historical and Museum Commission. It is in Potter Township in Centre County Pennsylvania

Built 1777 by Gen. James Potter. A stockaded fort refuge for the settlers of the valley region. The site is on the nearby rise.

Topics and series. This historical marker is listed in these topic lists: Forts and Castles • Settlements & Settlers • War, US Revolutionary. In addition, it is included in the Pennsylvania Historical and Museum Commission series list. A significant historical year for this entry is 1777. 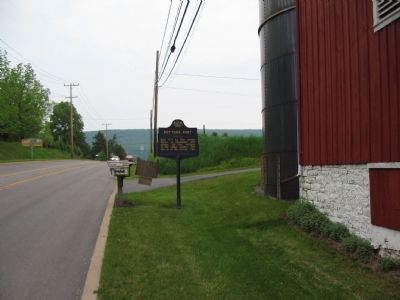 2. James Potter at FindAGrave.com. (Submitted on July 14, 2011, by Mike Wintermantel of Pittsburgh, Pennsylvania.)

Additional commentary.
1. Old Potter's Fort
The Report of the Commission to locate the site of the frontier forts of Pennsylvania published in 1916 stated the fort was located on a rise of ground on the south boundary of Centre Hall. As stated on the marker the fort was built in 1777. At least one action was fought nearby with Indian raiding parties. In 1916, the commission stated remains of the fort were seen near McCoy Tavern standing at the intersection of the highways.
— Submitted June 1, 2009, by Craig Swain of Leesburg, Virginia. 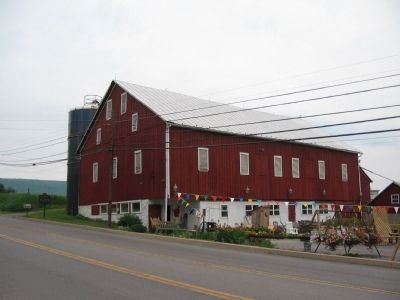