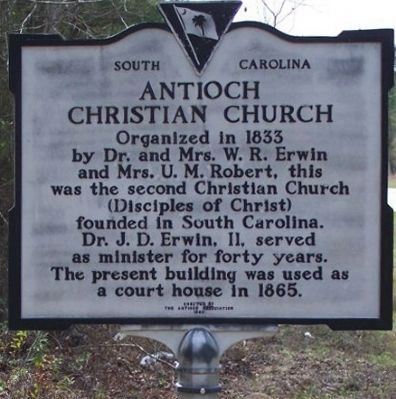 Organized in 1833 by Dr. and Mrs. W.R. Erwin and Mrs. U.M. Robert, this was the second Christian Church (Disciples Of Christ) founded in South Carolina. Dr. J.D. Erwin, II, served as minister for forty years. The present building was used as a court house in 1865.

Topics. This historical marker is listed in these topic lists: Churches & Religion • Notable Buildings. A significant historical year for this entry is 1833. 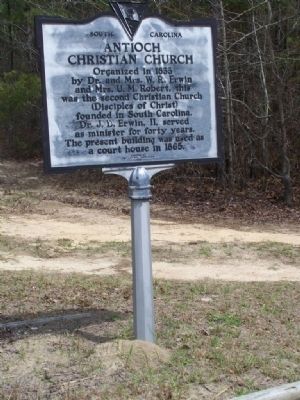 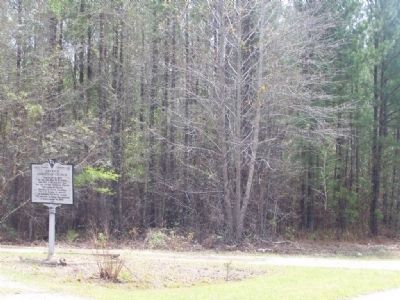 Additional commentary.
1. Antioch Christian Church
Antioch Christian Church, built ca. 1835, was the second Disciples of Christ Church in South Carolina. Today, according to the South Carolina Disciples, it is the oldest standing structure of that faith in the state and has been referred to as the "Mother Church." Antioch is also significant as an excellent example of the meeting house style of church architecture.

The founding of Antioch Church was chronicled in 1904 in the Churches of Christ by John T. 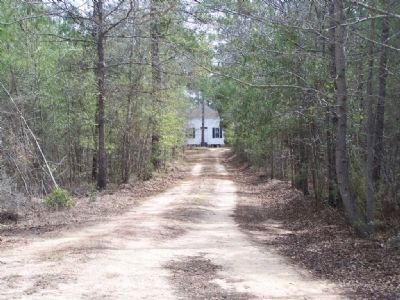 Photographed By Mike Stroud, 2008
4. Church driveway
Brown. This account was written by J.D. Erwin, son of one of the founders of Antioch, and a religious leader in his own right. According to Erwin:

Among the first to espouse the cause of pure Bible Christianity in the state of South Carolina was Dr. W.R. Erwin, a deacon in the Kirkland church (Smyrna Baptist Church, National Register of Historic Places, 1976) in the lower part of Barnwell county. After long opposition he requested, at a meeting of the church, May 4, 1833, a letter of dismission. On the 6th of July he and Mrs. Rachel Robert were excommunicated, on the charge of heresy. Soon after Mrs. Julia Erwin gave notice of her withdrawal, and she was also excommunicated. in the latter part of 1933, the three above united as a church. In 1835 they completed and set apart a neat meeting house (grounds donated by Gen. James D. Erwin) on the outskirts of Erwinton, and called the place Antioch, from acts 11:26. The building still stands and is in good repair.

As Erwin records, Antioch was on the outskirts of the community of Erwinton. In 1849 J.J. Trott, an evangelist, visited the area and reported:

Erwington [sic] is a most delightful place. It is not a city or town, but -- something more interesting -- a Christian neighborhood, composed of a postoffice [sic], a male and female Academy, a neat and comfortable meeting house, and a congregation 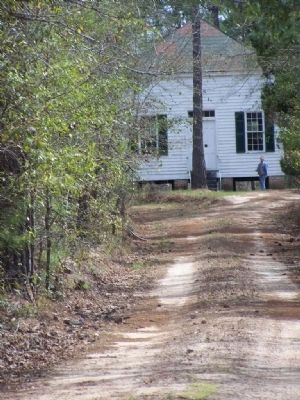