The Town of Guilford 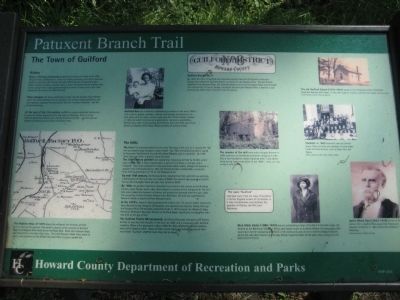 The Town of Guilford

History
Once, a thriving community prospered here along the banks of the Little Patuxent River. Guilford was a center for milling, quarrying, and cotton=cloth production in the late 18th through the early 20th centuries. It featured a post office, schools, churches, a general store, a hotel, and homes for the workers. One of the county's main roads passed through the center of town, and a spur track connected the town to the B&O Railroad.

Times changed; the quarry and factory closed, and the bustling town became silent. The stone buildings fell into disrepair. The railroad ceased operations, and new highways bypassed the community. Only the churches remained - and the old railroad bridge.

At the turn of the 21st century, Guilford is a quiet residential community, a pocket of history adjacent to the new town of Columbia. There is a new Guilford Elementary School and a Guilford Community Park - and the railroad bridge has become part of a new recreational trail.

The Hopkins Atlas of 1878 shows 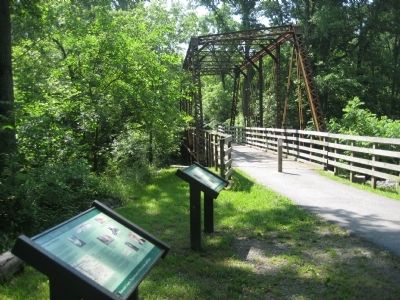 Click or scan to see
this page online
the millpond, the millrace, and the mill, as well as the quarries. The school shown at the junction of Guilford Road and Oakland Mills Road (shown as Road 284). Road 455 is Berger Road, and Road 212 is now Glen Oaks Lane. The Little Patuxent River flows north to south, and a portion of the Middle Patuxent River is shown on the left.

[Photo of Ina and Lorraine Carr]

Guilford Day was a tradition celebrated by residents in the early 1900s with a picnic, games, contests, a dance, and jousting tournaments. Ina Carr poses with her baby, Lorraine, who won the "Prettiest Baby Contest" in 1924, for which she received a gold locket. Lorraine's grandfather, William Carr, rode in the jousting tournaments that were held near Christ Church on Oakland Mills Road. (Photo courtesy of Lorraine Lilley)

The Mills The river first attracted settlers to this area. The drop in the river as it crossed the "fall line" provided energy to power a water wheel. By 1760, the Guilford gristmill, owned by Alexander Warfield and his sister Elizabeth Ridgeley, was in operation. By 1790, there were two mills: a sawmill and a flourmill.
The 18th century gristmill was substantial, measuring 40 feet by 36 feet, and it was 3 stories high. It had 2 waterwheels, 2 pairs of millstones, a millrace, and a millpond. There was a blacksmith shop and stone stable 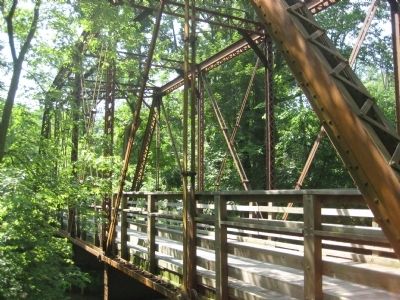 Photographed By F. Robby, June 8, 2008
3. Restored Railroad Bridge over the Little Patuxent River
nearby. Wheat had become a popular crop in Howard County, after the Ellicott brothers established a successful flour-milling operation in 1772 on the Patapsco River.
By mid-19th century, the Owings family reported that their gristmill was grinding 1,000 bushels of flour per year, at a value of $600. The sawmill was producing 45,000 feet of oak and poplar board per year, also valued at $600.
By 1860, the gristmill had been converted into a cotton mill, known as the Guilford Factory. Local farmers had to take their wheat to a nearby mill at Simpsonville. The Civil War soon halted the shipment of cotton, but production resumed after the war, under the ownership of John Franklin Mahool from Baltimore. The mill was supervised by Steven P. Heath, a machinist from Massachusetts.
In the 1870s, James A. Gary purchased the cotton mill. He and his father owned the Gary Manufacturing Company of Maryland and operated the Alberton Cotton Mills on the Patapsco River. He donated substantial funds in 1872 to build the Alberta G. Gary Memorial Methodist Episcopal Church on Guilford Road, named after his daughter who had died at the age of five.
The Guilford Textile Mill prospered, and the building was enlarged to 59 feet by 65 feet. It was the chief industry in the town by 1887, and it employed many Guilford residents. When a fire destroyed it about 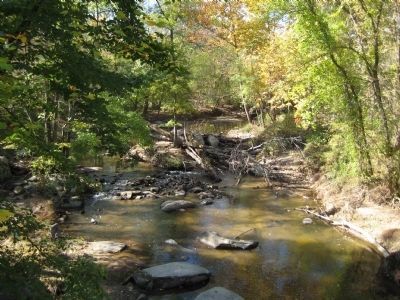 Photographed By F. Robby, October 31, 2007
4. Little Patuxent River
1890, Mr. Gary offered the workers employment at his Alberton Mills. Many of them moved there, and called the area of their new homes "Guilford" after the town they had to leave.

Guilford District No. 6
By 1878, the town of Guilford was important enough that the 6th District of Howard County was named the Guilford District, as shown on the Hopkins Atlas. The 6th District reached to the Patuxent River, the Columbia Road, and the Old Annapolis Road, and included the communities of Laurel, Savage, Annapolis Junction and Oakland Mills. It boasted a substantial post office, built of granite from the quarry.

[Photo of the remains of the mill]

The remains of the mill were sold to August Brunner in 1894, and then to the Maryland Granite Company in 1901. Only a few foundation stones remained after it was demolished during road construction in the 1980s. (Photo circa 1975, courtesy of Joetta Cramm)

[inset] The name "Guilford" may have come from the town of Guildford in Surrey, England, known for its textiles, or it may commemorate Lord Guilford, the guardian of Charles, the fifth Lord Baltimore.

Dora Mack Carter (1880-1979) was an outstanding citizen of Guilford. A talented singer, she studied at the Baltimore School Music, and taught music to Guilford children for many years. She was known for her humanitarian efforts in the community and service to the First Baptist Church, where she was choir director and Sunday School Superintendent for 50 years. (Photo courtesy of the First Baptist Church of Guilford)

[Photo of the old Guilford School]

The old Guilford School (1876-1941)stood on the northwest corner of Guilford Road and Oakland Mills Road. It was later used as a home, and then torn down. (Photo courtesy of the Howard County Historical Society)

Students in 1903 assemble near the schoolhouse. Many children are members of long-established Guilford families, such as Earp, Carr, and Penny. (Photo courtesy of Mr. & Mrs. Chester Lilley)

James Albert Gary (1833-1920) owner of the cotton mill in Guilford, was appointed Postmaster General of the U.S. in 1897 by President William McKinley. (Photo courtesy of Joetta Cramm)

Topics and series. This historical marker is listed in these topic lists: Industry & Commerce • Settlements & Settlers. In addition, it is included in the Former U.S. Presidents: #25 William McKinley series list. A significant historical year for this entry is 1878.

Location. 39° 9.96′ N, 76° 50.474′ W. Marker is in Columbia, Maryland, in Howard County. Marker can be reached from Old Guilford Road, 0 miles south of Guilford Road. Marker on on the trail near the parking lot, on the north side of the restored bridge of the Little Patuxent River. Touch for map. Marker is in this post office area: Columbia MD 21046, United States of America. Touch for directions.