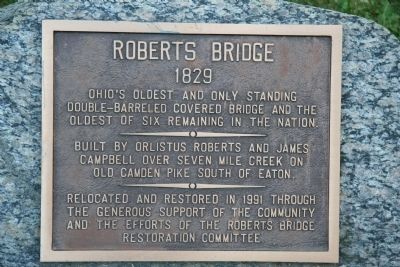 Photographed By Dale K. Benington, June 5, 2009
1. Roberts Bridge Marker
Inscription.
Roberts Bridge. Ohio's oldest and only standing double-barreled covered bridge and the oldest of six remaining in the nation., Built by Orlistus Roberts and James Campbell over Seven Mile Creek on Old Camden Pike South of Eaton., Relocated and restored in 1991 through the generous support of the community and the efforts of the Roberts Restoration Committee. . This historical marker is in Eaton in Preble County Ohio

Ohio's oldest and only standing double-barreled covered bridge and the oldest of six remaining in the nation.

Relocated and restored in 1991 through the generous support of the community and the efforts of the Roberts Restoration Committee.

Topics and series. This historical marker is listed in this topic list: Bridges & Viaducts. In addition, it is included in the Covered Bridges series list. A significant historical year for this entry is 1991.

Location. 39° 44.428′ N, 84° 38.31′ W. Marker is in Eaton, Ohio, in Preble County. Marker is on South Beech Street, 0 miles West St. Clair Street, on the left when traveling north. When traveling through the south end of Eaton, Ohio on US 127 turn west on West St. Clair Street and travel for one block. Turn north (right) on Beech Street and almost immediately, on your left, you will see the Roberts Covered Bridge. This historical marker is located just to the left of the front of this bridge, affixed to a large rock. Touch for map. Marker 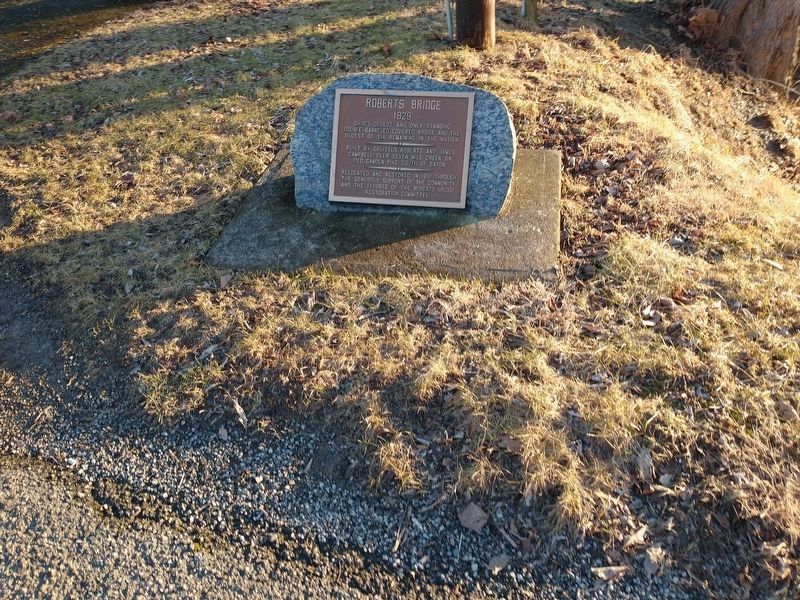 Click or scan to see
this page online
is at or near this postal address: 338 South Beech Street, Eaton OH 45320, United States of America. Touch for directions.

More about this marker. There is a stream, Seven Mile Creek, that runs from the north, flowing south, through the west side of Eaton, Ohio. This marker is on the east bank of that creek, just below a dam built across the creek, and just above the St. Clair Street Bridge that crosses this creek.

Regarding Roberts Bridge. This covered bridge was originally built south of the town of Eaton, across this very same Seven Mile Creek. In fact my Ohio Atlas & Gazetteer, published by the DeLorme Mapping Company, with a copyright date of 1991, still shows the Roberts Covered Bridge in this original location. However, in the late 1980s (as best I recall) this bridge was vandalized and set afire. The roof and outer wooden covering were all burned down and all that remained were the fire scarred wooden trusses. It was these all important wooden trusses that were carefully restored, and then protected with a new roof and wooden siding, and then relocated within the community of Eaton for better 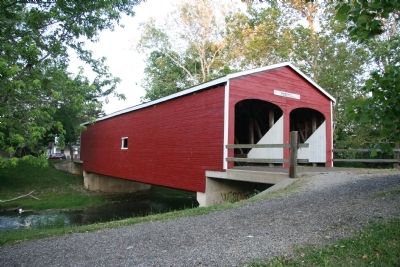 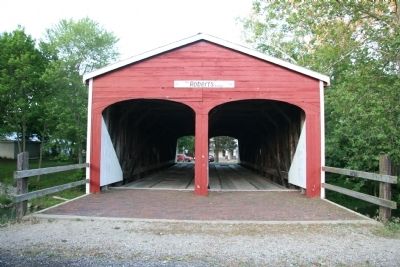