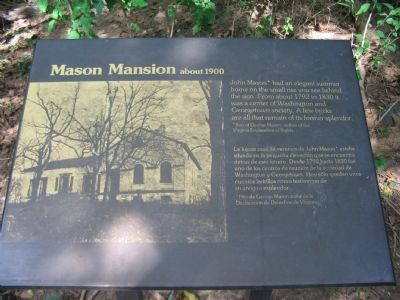 Photographed By Craig Swain, August 8, 2008
1. Mason Mansion about 1900 Marker
Inscription.
, John Mason had an elegant summer home on the small rise you see behind the sign. From about 1792 to 1830 it was a center of Washington and Georgetown society. A few bricks are all that remain of its former splendor., Son of George Mason, author of the Virginia Declaration of Rights., . This historical marker is in Theodore Roosevelt Island in Washington District of Columbia